The 2013 Winter Wartrail will go down in the history books – and it won’t be because of the cold or the extremely low water levels. 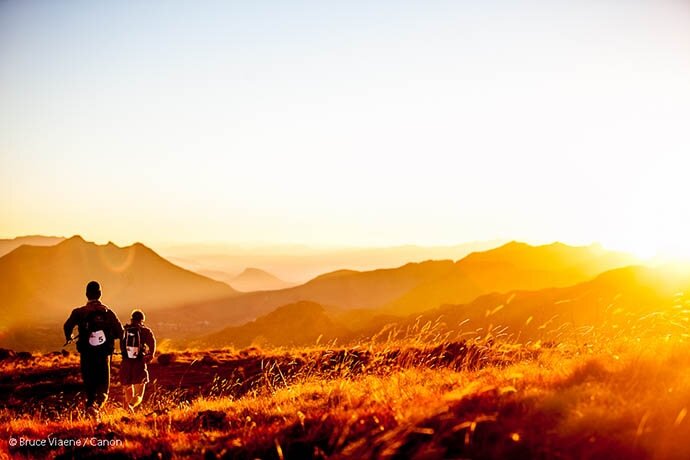 This year’s Wartrail will be known for the howling, gale-force winds battering the brave racers, non-stop, for the entire three days. “This is Wartrail unplugged!”, declared Adrian Saffy (race organiser), on the eve before the mayhem unfolded. Followed by a low murmur, and a few cries of hysterical laughter, from the small band of athletes huddled in the Lady Grey Mountain View Lodge. Wartrail is a mental game and without being somewhat “touched” you will not be able to traverse the Witteberg Mountains, cycle your way up and down some treacherous passes along the border between South Africa and Lesotho or paddle the freezing Orange River to the finish line. Defending champ, and all round adventure man, Craig Carter-Brown came back to defend his title against a mired of hardened athletes. With an overall time of 18h:02, Craig was able to secure his title for another year. “ Ja... It’s nice to win the Wartrail. But it’s one of those races that you just want to get to - and to be out there.” commented Craig.

Athletes stood under the Race Food arch in the sleepy town of Lady Grey in the Eastern Cape at 04:00. Only in another two and half hours would they only be able to switch off their head torches as the sun would start to rise. Little white lights danced on the mountainous skyline as the runners methodically worked their way along the ridge. For some, this day would end just after noon. For others, they would need to switch on those head torches again and descend into Balloch Farm in the dark. “15 hours on my feet is almost indescribable. Although I was expecting to take that long (or longer), actually doing it was a different story” said Timothy Ross. “Adrian sweeping us along really helped. His experience and motivation was fantastic and really helped those of us taking our time to get to the end”. Asked if he would do it again, Timothy replies easily, “The experience, spirit and beauty of the outdoors were one hundred percent worth it - I would do it again, even knowing that it would take that long a second time around.”

After a good and much needed night’s rest, the warriors arose from their tents hidden in the cave that provided shelter from the unrelenting wind to jump on their bikes and begin the cycle over Lundean’s Nek. Within an hour, Adrian Saffy had been blown off his bike twice by the wind whilst climbing the pass.

Craig Carter-Brown led the 135km cycle leg from Balloch Farm to a small remote village Mdlokovane . “It was a hot, lonely ride with some terrible corrugations in the road caused by the wind”, said an exhausted Craig. Every athlete echoed those words as the only way to miss the corrugation is to ride on the footpaths on the side of the road which have been carved out by the local herdsmen’s and the occasional donkey.

With a bit more life in the ever shrinking group of adventurers, war stories were told fiercely around a plate of hot food and their cherished hot chocolate.

Due to the drought that the upper Eastern Cape has experienced, water levels were at an all time low. Race Directors, Mike De Haast and Adrian Saffy, made the call to shorten the paddling leg to 35km due to little or no water in the usually mighty Orange River. From racing snake K1 kayaks to battered boats and heavy plastic moulded canoes: each paddler’s chosen craft reflecting their paddling expertise – or lack thereof. With the likes of Shaun Biggs and Clint “Lightee” Pretorius, this was not going to be a slow day. The average onlooker would think this is the start of the prestigious Dusi Canoe Marathon, not Day 3 of one of the toughest staged multi day adventure races. Blades flying through the water, flicking up green emeralds of freezing water in the eyes the less enthusiastic paddlers. Clint was the first boat home followed by Robert Chrichton, Shaun Biggs and eventual race winner, Craig Carter-Brown. “I reckon it was more than 35 kilometres”, noted Clint Pretorius. “We had to zig-zag our way down the river and dodge the sand banks that are normally covered by water”
Throughout the morning lonely crafts made their way to the finish line. Some were ecstatic, others emotionless – trying to digest the past three days, trying to understand their accomplishment. Those who have conquered a Wartrail know that it is not something you can easily talk about because if you haven’t done it, you have never really lived.

Without the help of the marshals, medic team and of course the local communities opening up their hearts and land to each racer, this would not have been possible.