It’s the 100th edition of the Tour de France (TDF) and Africa’s hopes at this year’s race are pinned on Darryl Impey (Team ORICA-GreenEDGE), Robert Hunter (Team Garmin-Sharp) and Chris Froome (Team SKY). For us Africans, this occasion is even more momentous because one of these riders has a very real chance of winning the tour. How awesome would that be? 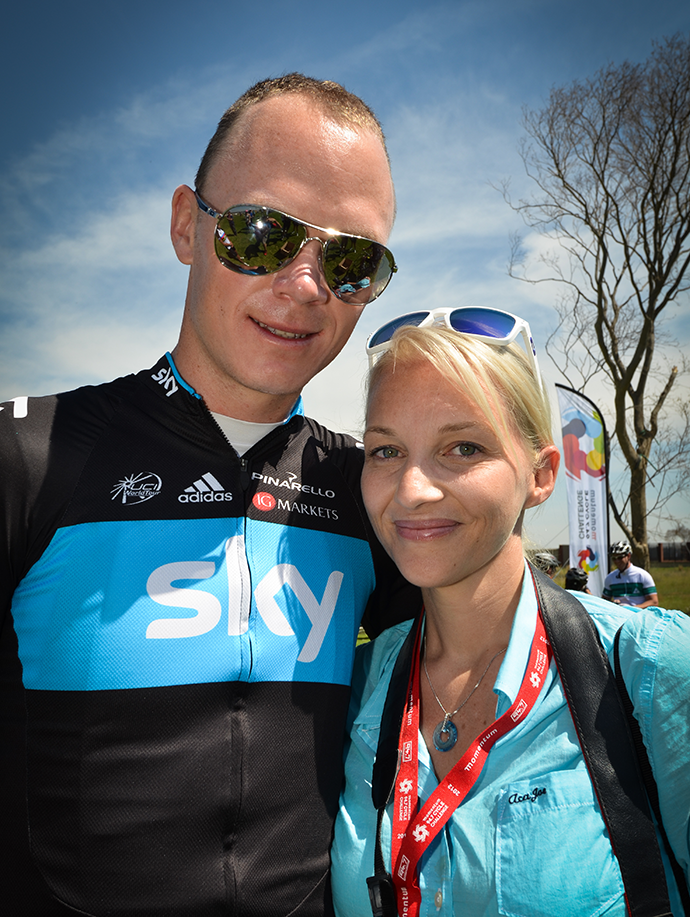 From humble beginnings in 1903, the TDF has become the largest annual sporting event in the world. The race is broadcast to 3,5 billion people and an average of 12million spectators come out to support their favorite riders and heroes along the route.

This year's event starts on Saturday, 29June and finishes on Sunday, 21 July. Covering a total distance of 3,479 km, there are 21 stages to be completed with just two rest days. Stage profiles include seven flat stages, five hilly stages, six mountain stages with four summit finishes, two individual time trials and one team time trial. The first stage is from Porto to Vecchio and these two towns, as well as eight others, will be seeing and experiencing the TDF for the very first time.

Over the last couple of years, the tour has received its fair share of media attention, with doping being at the centre of it all. The Lance Armstrong doping saga shook the sport to its core, with stories and rumors of hired couriers on motorbikes delivering performance-enhancing substances to hotel rooms, blood transfusions being done on rest days and the UCI (international controlling body for the sport) accepting payments to cover up positive tests. Armstrong, who was stripped of all his TDF victories and later admitted that he did use performance-enhancing drugs, left cycling under a huge shadow of doubt - a hero had fallen. Since then, there has been more shocking stories implicating some of the world’s best cyclists and as a result, the sport has lost a lot of its credibility. However, all is not lost, as the last two years' victories at the TDF were drug free! Let's hope that in 2013, we will build on the legacy of our 'clean' winners; Cadel Evens (2011) and Bradley Wiggins (2012).

Moving on from all the drama and controversy that surrounds this
still-awesome sport, let’s take a look at our riders from Africa, whom we can be extremely proud.

Born on 20 May 1985 in Nairobi, Kenya, Chris is 1,86-metres tall. He attended St Johns College in Johannesburg and then went on to study at UJ. He started his cycling career as a mountain biker whilst living in Kenya, and received guidance from the well-known Kenyan mountain biker David Kinjah. Chris’s strengths lie in mountain climbing at time trialling, two of the main criteria required to win a grand cycling tour.

South Africans have always had a soft spot for Froome and this was reinforced at the 2006 Road World Championships in Salzburg, Austria. Froome, who was representing Kenya, was seen making his way to a team manager’s meeting on his bike in the pouring rain - a duty that is not normally undertaken by a rider. Seeing this, the South African team manager, Tony Harding, immediately took him under his wing and told him there was a place for him at the SA team hotel and that they would take care of his race number collection and logistics surrounding his participation in the event. That was the same year when Chris crashed into an official at the 2006 World Championships as he left the time trial ramp at the start of the event, causing both men to take a tumble. Undeterred, Chris got back on his bike and finished in 36th place!

In 2008, he joined up with South African Robert Hunter, on team Barloworld, to ride in the TDF. He finished 84th overall and 11th in the Young Rider’s category. Then in 2010, Froome was diagnosed with bilharzia and this adversely affected his cycling career during the 2010-2011 seasons. Down but most definitely not out, Chris went on to claim an individual stage win at the 2011 Vuelta a Espana. Things were looking up for Chris, but at the start of the 2012 season, his bilharzia flared up again and, to add insult to injury, he was also involved in a collision with a pedestrian whilst on a training ride in March 2012. By the start of the 2012 TDF, it looked like he had put all his problems behind him, but this was not to be. He had to contend with a flat tyre on stage 1 and a crash on stage three, problems that would have taken a lesser man down, but not Chris. He went on to clinch a stage win in magnificent style and placed 2nd overall. In 2013, he already has three impressive wins under his belt, at the Tour of Oman, then the Critérium International and, most recently, the Tour de Romandie. You couldn’t ask for a better start to the season and this just reinforces that Chris is not someone to be taken lightly at the 2013 TDF. 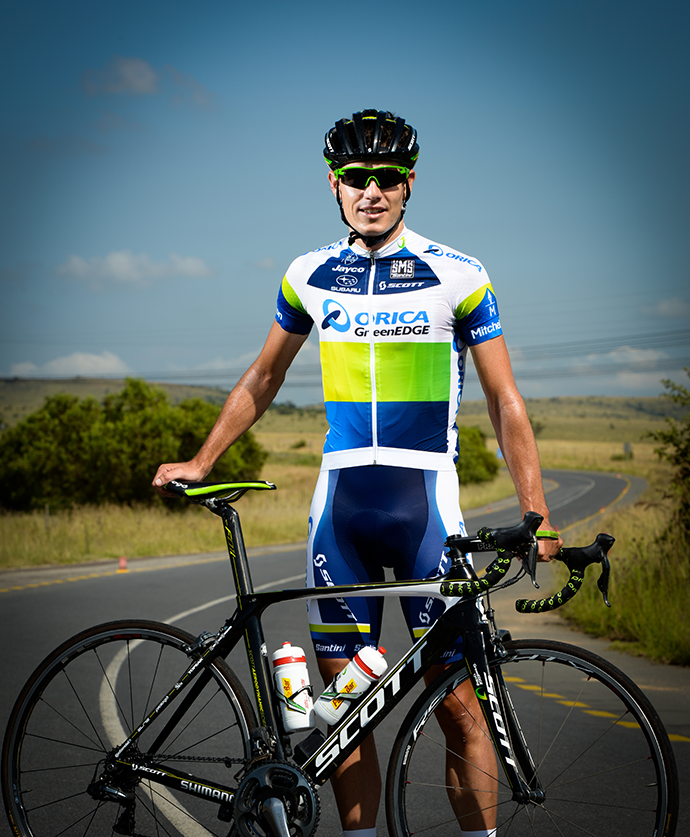 Darryl was born on 6 December 1984 and is 1,81 metres tall. Known as' Zulu' by his South African fans and friends, Darryl comes from a sporting family. His father, Tony Impey, was a cyclist and represented South Africa in his heyday! He has also rubbed shoulders with road cycling legends the likes of the late Allan van Heerden, Willie Engelbrecht, Rodney Fowler and many other South African greats.

During his career, Darryl has ridden for Pro Continental, as well as in pro tour teams such as Team Barloworld from 2008-2009 and Team RadioShack in 2010. In the same year he rode the Argus with Lance Armstrong and is rumored to have flown in Armstrong’s own private jet to South Africa.

In 2011, he rode for Team NetApp and then he joined Australian team ORICA-GreenEDGE at the beginning of 2012 and he’s been there ever since.

Darryl made his grand tour debut at the Giro d’ Italia in May 2012 and solidified his position as one of the world's best lead-out riders around. His incredible strength in the sprint train inspired his TDF selection in 2012, where he posted no less than five top-ten finishes over the three-week race. Darryl was due to ride the Giro d’ Italia this year, but has had to pull out due to the birth of his first child, leaving Matt Goss, Orica-GreenEDGE’s top sprinter, without his key lead-out rider. Matt, who dubbed Darryl as the ‘incredible Impey’, has made it publicly known that if he went to war, he would want to take Darryl with him to fire the ultimate shot! That kind of comment just goes to prove how far this 29-year-old has come in the world of professional cycling. 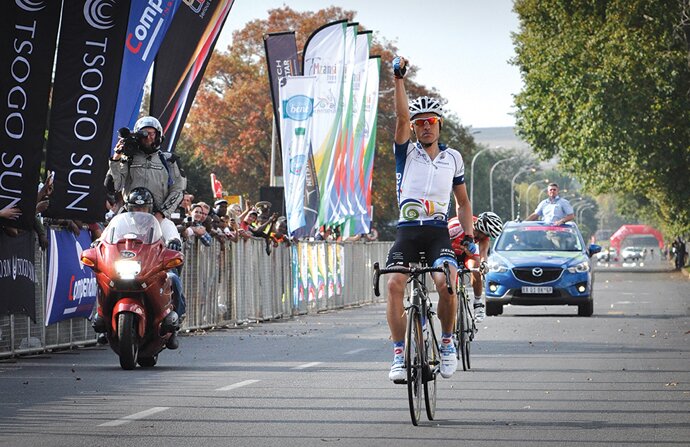 Robert’s cycling career has been an illustrious one, having ridden for teams Mapei, Rabobank and Phonak, which were all ranked number one in world cycling at the time. And who will ever forget the 2006 TDF that saw Robert’s team leader, Floyd Landis, win the event and the huge role that Robert played in getting Floyd through each stage. However, Floyd’s celebrations were short lived because two days after the TDF, while having coffee with Robert, it was reported that Floyd had tested positive for doping and was stripped of the title. This bad news also cost Robert his tour winnings, which the winner splits with his team, as well as the tens of thousands of Euros that event organisers would have paid to Floyd and two selected teammates (Robert being one of them) just to enter the one-day criterium circuit races in the weeks following the TDF.

Robert has earned himself an enviable reputation in the cycling fraternity because amongst his many achievements, he was the first South African to compete in the TDF and is still the only South African that has won a stage in this event. He has won stages in all three of the grand tours, two stage wins in the Tour d’Espania and a win in the team time trial at the Giro d’Italia.

Whilst all eyes will be on Chris Froome for the overall victory in the 2013 TDF, Robert’s role in the Garmin-Sharp team will be to assist his teammate and fast sprinter Tyler Farrar to get to the finish line for a stage victory. This is a very different role to the pure sprinter role that Robert is used to playing, where he was winning his own stages in the Tour d’Espana and the 2012 TDF. But before we see this as an injustice to our local hero, we need to remember that cycling is a team sport; when Tyler wins, the team wins.

Now that we know a bit more about our African riders to watch out for, we can look forward to an action-packed Tour de France! Make sure you don’t miss any of the action by following the DO IT NOW Road Cycling web page on www.doitnow.co.za/roadcycling. We wish our riders the very best of luck at this prestigious event, and we will be watching and cheering you on every step of the way.

I caught up with Robert at the recent Mzansi Tour in South Africa, where he claimed the top podium position, to chat to him about the upcoming TDF.

Q: How does this year’s TDF route compare to previous years?

The TDF is always a difficult event and there is so much that can happen and does happen on a daily basis that you can never compare previous years. Crashes also play a part, as the riders get tired and fatigued. For a sprinter, the mountains are always challenging and, at times, you will notice a lot of the riders (sprinters, domestiques) getting together in one huge ‘autobus’ to get to the finish within the daily cut-off time. This year will be really interesting as we do the mighty Alpe-d’Huez twice on stage 18 and this will go a long way in deciding the overall winner.

Q: Will your training change due to the route change?

My training has been great this year as I spent some time back home in South Africa, which allowed me to train in good weather. This was a difficult decision to make as I have not spent much time with my wife and children this year, but with the bad weather in Europe it was the right decision to make. It’s all part of being a professional cyclist. I had some good training at the Mzansi Tour before taking part in the Giro d’Italia this year and from there, I should be good for the TDF.

Q: What kind of rider is the Tour de France 2013 course suited to?

It’s suited to anyone that can climb, time trial and climb some more. To choose a winner this year is difficult, although Froome is showing some good progress and form at present. In saying this, there are at least five other riders who will be hungry and ready for the overall general classification, and aiming to wear the Yellow Jersey at the finish on the Champs-Élysées in Paris.

Q: How has competing in South Africa’s Mzansi Tour helped with your preparations?

I’ve had great weather to train in and the areas around Nelspruit are some of my favourite training areas in the country. The competition was good and I was also able to test where I was before the Giro.

Q: What are your expectations and goals for this year’s TDF?

I am always on the lookout for a stage win, however, I now have a defined job within the team and we will be looking to get Tyler Farrar stage wins, as well as have him compete for the Green Jersey. Riding in the 100th edition of the TDF will also be a great honour, but it will still be work as usual.