Celebration and Unity At The Nelson Mandela Sports and Culture Day 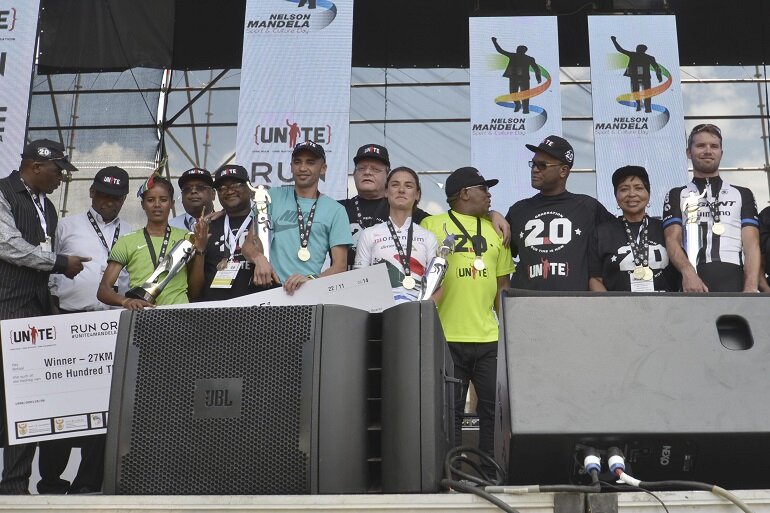 Once again South Africans proved that sport can be the glue that brings people together, as cyclists, runners (and walkers) put their best foot forward to celebrate the legacy of Mandela. Sports Minister Fikile Mbalula welcomed everyone in the early hours of the morning, and his infectious energy got all the competitors excited for the day. With white doves released and a bouquet of colourful balloons symbolizing peace and the rainbow nation, the day kicked off with the national anthem.

The winners of the 27km road race pocketed R150 000, with second getting R100 000 and third R50 000. The winner of the men’s race was Elroy Gelant in a time of 1:25:25, with Desmond Mokgobu second and Philip Berech third. MeseretBiru was the women’s winner in a time of 1:37:38, with MamoralloTjoka second and MapasekaMakhanya third.

The Minister of Sports and Recreation, MrFikileMbalula as well as the Minister of Arts and Culture, MrNathiMthethwa, on behalf of the Government of the Republic of South Africa want to thank South Africa for massively supporting this year’s UNITE 2.0. The initial target of 25 000 was overwhelmingly exceeded by the attendance at the event and the organisers acknowledge that there are millions of others who could not attend, but supported the initiative.

Of course, the Nelson Mandela Sports and Culture Day is not only about the athletes, and  after the races, a medal ceremony and concert was held on the South Lawnsofthe Union Buildings. ZandileMzazi sang the national anthem to start the awardsc eremony, and after the medals were handed out, dignitaries such as the honourable Sports Minister Fikile Mbalula, Arts and Culture Minister Nathi Mthethwa, and Deputy PresidentCyril Ramaphosa addressed the nation, beforethe star-studded entertainment began.