They say a near-death experience makes you feel more alive. Perhaps that explains the cultish following of CrossFit, a growing fitness phenomenon you might want to try out if one of your 2013 resolutions is to shape up. CrossFit was founded by Greg Glassman in the US, in 2000, as an underground alternative to big commercial gyms. It's a training programme that claims to have molded some of the fittest athletes on Earth through gruelling, competitive workouts built on running, jumping, and lifting heavy things, in other words, the functional movements of life. The programme focuses on building functional bodies as opposed to muscle isolation, so you won’t find a bicep curl machine or similar in a CrossFit gym, nor will you find many 'inverted triangle' bodies with arms thicker than legs. Early on, CrossFit became the 'go to' strength and conditioning programme in the US for groups like police academies and military units that needed to build elite physical capabilities for unpredictable circumstances. From there, its global popularity has exploded, and today there are nearly 5,000 CrossFit gyms dotting the globe, with 21 in South Africa. 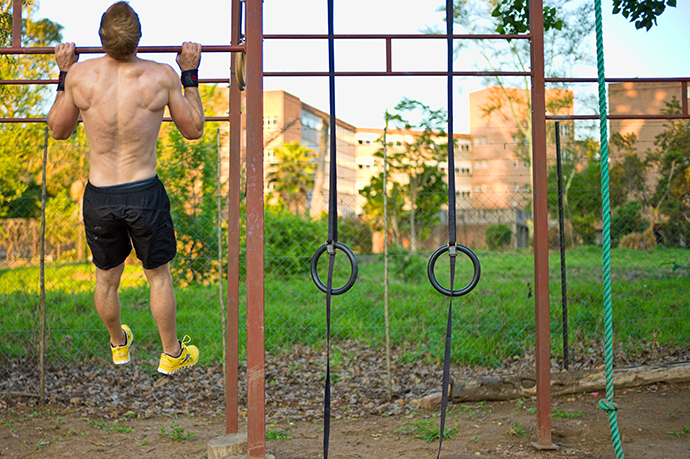 I first heard about it a few years ago from my best friend, who had joined up in San Francisco to get in top shape for her wedding. A wedding doesn’t quite require the same extreme fitness as the military, but hey, she looked amazing and could crank out pull-ups like a machine, two of my life goals. Eager to give CrossFit a try, I found a gym close to me in Pretoria and resolved to submit my slightly unfit self to a two-month trial.

CrossFit is all about intensity, and it was clear from my first work out that it was going to shock my system. At my introductory session (you can try one for free), I worked through a few moves with Chad Theron, co-owner and trainer along with Riaan Hofmeyr at CrossFit Pretoria, before being given my work out of the day, or 'WOD' in CrossFit lingo. This consisted of seven burpees (where you jump from a standing position to a sprawl with your chest on the ground, then hop back to your feet, and clap your hands over your head while jumping followed by seven wall balls (here you hold a medicine ball at chest level, crouch into a full squat as you power up to throw the ball against a mark high on the wall, and then catch it as you return to a squat). These exercises are then repeated for seven rounds. It sounded easy enough, but by round two I wondered if I would be able to finish. I grunted through my last few reps, after which Chad called out my finish time of 8:35, and declared it 'not bad'. I think he was just being nice because he could see I was struggling not to keel over.

From the intro class, beginners progress to the 'on-ramp' programme. At CrossFit Pretoria, that's four sessions with a trainer to learn the necessary techniques, like squats, cleans, and presses, before graduating to fast-paced classes with the seasoned CrossFitters. Classes are usually about an hour long, and most gyms give classes throughout the day. This provides freedom in scheduling, but it's still a group class so you have to arrive at the appropriate time.

Every day brings a different workout, which keeps things interesting and constantly challenges muscles in new ways. Classes begin with a 10 minute warm-up, such as stretches and 20 each of pull-ups, sit-ups, and ring dips. Then it’s 15 minutes of strength-focused training, for example, finding your one rep max deadlift, then performing five sets of three reps at 80% maximum weight. From there, it’s usually 10 minutes to practise a skill, like progressions to ring dips, one-legged squats, handstand push-ups or rope climbs. Finally, it’s onto the main workout of the day. The WOD is the killer intensity part and typically consists of a sequence of movements that might include a combination of sprinting, lifting weights, kettlebell swings, body weight exercises, and skipping rope. Working against the clock during the WOD maintains the intensity. The WOD is always performed either as 'rounds for time' - how fast you can get through a certain sequence of exercises, or 'as many rounds as possible' - how many rounds of a sequence of exercises you can get through in a set time. The whole class starts the WOD at the same time, and it's an energetic, competitive atmosphere that compels you to push beyond what you thought were your limits. When done, you chalk up your time on the whiteboard to compare to other classes throughout the day.

If all that sounds a little intense, well, it is. But the workouts are designed, in theory, to be scalable to a person of any fitness level. For example, weights or reps can be scaled down from what is prescribed in the WOD if necessary. Even though you may need to scale down, especially at first, the workouts are still designed to leave you heaped in a pool of sweat (and quite possibly blood, puke, and tears) in the end. Movements are substitutable too. Can't do the handstand push-ups prescribed in the WOD? I can't either! No problem, just do jackknife handstand push-ups with your hips bent 90 degrees and your feet resting on a box. Can't manage that? Do normal push-ups until you get stronger. And you will. After just a month at CrossFit I went back to my old gym and blazed through my standard lifting routine that had been my mainstay for several years. Clearly I wasn’t pushing it previously.

So why pay a membership fee to work out in a purposely sparse and slightly grungy warehouse with rudimentary fitness equipment? You can, after all, do CrossFit on your own in your garage - daily WODs are posted online along with lots of instructional videos. But I think joining a CrossFit gym is great, especially for newcomers. You have trainers supervising every workout and giving you tips to improve your lifting technique. This is especially important to avoid injury when doing complicated movements like the Olympic lifts. The community is also extremely motivating. At first it was a little weird to give everything I had in a workout, while grunting, grimacing, and dripping sweat everywhere in front of other people. Honestly though, people are so busy trying not to die themselves that they don’t have time to check out the faces you're making when you try to crank out your hundredth push-up.

I've also found the other gym goers to be ultra supportive. One of the toughest workouts I've done involved flipping a tractor tyre 30 times as fast as possible and then dragging a 60 kg weighted sled back and forth 10 times across the whole gym. This was one of the few workouts we did one at a time because there wasn't space or equipment for everyone to go at once. I was pleasantly surprised to hear even the muscliest of the men cheering me on when I didn't think I could drag the sled another step. Afterwards, they gave me some great tips on stretches to ease my screaming quads and calves. You won't find camaraderie like this amongst the bros at your local gym because they're too busy checking themselves out in the mirror. Mirrors are a feature mercifully omitted from most CrossFit gyms.

After my two-month trial, I'm definitely addicted and will stick with the programme. I think CrossFit will make just about anyone stronger, faster, and fitter, and more capable in everyday activities, from helping friends move house, to hobby sports, and pretty much any physical activity you can imagine. From what I’ve seen, CrossFit builds awesome bodies too. Search Google for some before-and-after photos to be truly amazed.

During my first week at CrossFit Pretoria, I chuckled when a guy split his shorts while doing kettlebell swings (he still smoked me in the workout though). In the second and third week it also happened to two different guys. I can think of three possible explanations for the short-splitting phenomenon. 1) CrossFit makes your muscles grow faster than you can buy new shorts; 2) CrossFitters like to wear tight clothes to showcase their physiques; or 3) CrossFitters get so addicted to working out that they launder their gym kit to shreds. It's probably a combination.

For even better body transformation results, CrossFit recommends the 'paleo' or 'zone' diets, which focus on whole plant and animal foods, limiting starch, and avoiding processed food and added sugar. Talking about nutrition reminds me of a joke: "They say you are what you eat. That's strange. I don't remember eating any sexy beast today!"

To find an affiliate near you: map.crossfit.com
For all things CrossFit: www.crossfit.com
My gym: www.crossfitpretoria.co.za
Check out a CrossFit competition: Fittest in Cape Town, 26-27 January 2013, Camps Bay www.fittestincapetown.com