End of an Era - Full Throttle Monster Energy Nationals Round 4

It was that time of the year to head off to TEZA MX track, just outside of Richard's Bay, with my comrade, Terence Monk, and UK visitor, Tom Kennedy, for the Full Throttle Monster Energy Motocross Nationals Round 4, over the weekend of 16 June 2013.

The trip felt shorter this year, as we chatted about motocross in the UK and Tom's invitation from Peter Cordinar to take part in this national event. It's been a long time since a rider from over the water has raced on our shores, and is long overdue.

The final round of the Womza Full Throttle, Monster Energy, TRP Motocross Nationals was run at the ever-perfect TEZA motocross track in Kwambonambi, KwaZulu-Natal. There couldn’t have been a more perfect setting to finish off what can safely be said to be the best motocross season in years. Saturday was slightly overcast, but the rain held off, and Sunday was just perfect blue skies for motocross. Winter is always a great time to ride in KwaZulu-Natal and the track stayed loamy the whole weekend. There was also a full-sized crowd lining the edges of the TEZA track on Sunday and they got to witness some of the finest motocross riding in Africa. It was also great to see activities for the little kids, with Strider bikes offering fun training and bicycle fun for the 2 to 5 year olds.

The 50 cc Pro class would be first up and I must say that the racing has been furious. Camden McLellan was leading going into this final round, but inconsistency had been his nemesis in 2013, so he would have to make sure that he had a cool head. Jono Mlimi had to win all three Motos to have a chance at winning the championship. He went out in Moto 1 and blitzed the field. It was looking good for him to repeat this on Sunday, but a silly mistake while leading in Moto 2 saw him drop into second behind Camden McLellan and effectively end his season's hopes. Jono went all out in Moto 3 and won, but with Camden in second, it just wasn’t enough for the title. There was a big battle for third between Hayden Tully and Vincent van Rooy, who was also celebrating his birthday. Hayden had better starts and was flying, but two crashes put him back in fourth overall behind Vincent. Cape Town rider Ike Klaasen struggled a little on this technical track, but still did enough to finish third in the championship.

The 50 cc Junior class was up next and it was time for a new sensation to shine. Kyle Phillips won all three Motos and holeshot all three as well, to win Skullcandy headphones.

The race for second was now on, however, a young lady rider, Emma Jennings, was making waves. She was in a battle with championship hopeful James Thompson. James would get the better of her in Moto 1 and 2, but Emma finally got to second in Moto 3 and even matched the lap times of the leader, Kyle Phillips. James didn’t do enough to win the title though, as that honour fell on the ever-consistent Lucas Venter, who was given a set of Jonnesway Tools from his idol, Richie van der Westhuizen, for winning the championship.

The 65 cc class went down to the wire. It was the most intense class to watch as three riders were within just three points of each other going into the weekend. KZN rider Cam Durow is a jump specialist, which suited the TEZA track. He also racked up enough holeshots for the Skullcandy award. Good starts were the exact ingredient needed for success and resulted in three wins. He rode faultlessly, not making any mistakes. The three wins were also enough to clinch the title by four points. Dalton Venter impressed as he was the only 65 to clear all the jumps. This gave him some great lap times, but bad starts meant that he would struggle to catch Durow and had to settle for second overall. Wikus van Sandwyk has had a cracker season and was not expected to be in the lead going into the final round. He did a great job fighting for the title, but two thirds and a second wasn’t enough. Wikus has shown his metal now and will be on everyone's mind for 2014. Grant Hutton was fourth in the championship ahead of Christiaan Cilliers.

The 85 cc class has been the Eastern Cape class! Keegan Hickson Mahoney, from PE, won round one, but sadly was injured before round two. This meant the flame was handed over to fellow PE rider, Seth van der Abeele, and he did a sterling job holding off a mob of Gauteng riders for the title. Slade Smith was his nearest rival and pushed him all the way. The day, however, belonged to RAD, Vision Racing, Midas KTM rider, Matthew Kruger. He pulled off his first National win in the 85 cc class and has now set the tone for 2014. Slade Smith was second overall, courtesy of a bad 1st Moto, but he will look to win this class in 2014. KZN rider Cayle Dormehl was the holeshot king for the day and also rode his way to third overall. Seth was fourth for the day, nursing a bad knee, but this was enough for the title.

The Pro-mini class was almost a formality for the CIT BadBoy KTM rider, Jason Visser. He had a big points lead and only mechanical failure could prevent him winning.

His nearest rival was Marcus Phelps, who has been fast all year, but has suffered with some mechanical failures. Marcus qualified fastest, but a crash while leading Moto 1 almost ruined his weekend and any chance of the championship. The TEZA kid, Charl van Eerden, won his first national race in years in Moto 1 and the crowd went wild. Jason Visser took it easy in Moto 1, but went for the win in the second heat, to give him the title. Now relaxed for Moto 3, he would check out and win by far. There was a big pile up with Charl van Eeden, Justin Thompson, and Marcus Phelps in Moto 3 and that would hand second place to Joshua Mlimi. Charl van Eeden remounted to finish third overall, with Marcus in fourth.

The 125 High School class also came down to the wire between Cape Town rider Dylan Stokes and the KZN 'wonder kid', Brad Cox. Brad recently returned from the USA and seems faster than ever. He won all three and didn’t look back at all. Dylan started each race well, but a massive crash a few weeks ago has hindered his training and he wasn’t as fit as he would of liked. This allowed Dirco van der Westhuizen to reel him in and claim second overall for the day. Dirco finished third for the season in his rookie year behind Dylan Stokes. Intertherm KTM rider Nicholas Phelps had a great season to finish fourth and the Witbank kid, Tyron Nel, finished fifth overall in the championship.

MX1 is a tough class. Brute force and fast guys from first to last make this the premier class in South Africa. The day provided a different winner in each race, which shows just how tough this class really is. Kerim Fitz-Gerald is the most improved MX1 rider of 2013 and he proved this by winning heat one. A mechanical failure in Moto 2 prevented him winning overall and third would be the end result for the day. Sacha Naude also tried to shake things up by winning Moto 2. He looked strong and ready to keep winning. Unfortunately he couldn’t do it again as Moto 3 belonged to the National Champion, RV, aka Richie van der Westhuizen. Grant Frerichs rode his 250 to fourth place ahead of Royce Griffin, who is on a Yamaha now. Royce’s Kawasaki gave some odd engine problems, which they are sorting out with Kawasaki SA as we speak.

The MX2 class was once again a big class and really spectacular to watch. Richie van der Westhuizen had a big points lead and needed two solid results to secure the championship. His rival, Kerim Fitz-Gerald, did everything in his power to see if he could force a mistake from Richie to reclaim the title he had lost two seasons back. Richie was under pressure from Kerim in Moto 1, but his experience enabled him to keep calm and ride flawlessly to the chequered flag. A second in Moto 2 was enough to wrap up a title that has eluded him for many years. Kerim won Moto 2 and 3, to end off the season with a big statement for 2014. The reigning champion, Anthony Raynard, Caleb Tennant, and Grant Frerichs battled it out for third. Grant was relaxed and styling it for the crowd and that seemed to be the recipe for success as he got stronger through the weekend for third overall. Raynard had some bad luck after a solid start to the weekend, but fourth was enough for fourth in the championship. The rookie, Tristan Purdon, rounded out the top five in the champs.

The MX3 class is made up of three different classes. Ian Topliss has been the man to catch in the Vets and even riding with a shoulder injury, no one could catch him. Ian collected another South African title to add to his big collection. He was fast all weekend and didn’t look like slowing down any time soon. Roger Bergstrom was second ahead of Kobus Goosen.

In the Masters, local man Clint Dreyer surprised everybody when he rode in his first national of the season and won. He left the two championship hopefuls behind him and Terence Monk would win that battle on the day ahead of Alec Combrink. Alec Combrink might have been beaten on the day, but did enough to win the title by 12 points. Harry Grobler was third.

The Grand Masters was won on the day by Rod Bergstrom. It's amazing that he is still turning out quick laps and was a deserved winner. Francois du Plooy was second ahead of Geoff Den, who missed out on Moto 1 when his son, Wade Den, clipped a tyre and broke his femur. Geoff did enough to win the title though and add to his ever-growing title collection.

We also say goodbye to a few people. The first being Full Throttle, who announced their withdrawal from the sport as title sponsor. They have been in it for five years and helped elevate our sport to new levels. Ryan Shapiro said they will still be around with the Full Throttle Motocross team, but those red and yellow banners will be missed.

The second being the LEGEND himself, Richie van der Westhuizen. He will ride the regional season out, but his national career has come to an end. Richie will focus on his business, Racestar Graffix, and will be promoting the sport behind the scenes.

The 2013 season was the best for some years and a fitting end. Well done TEZA. 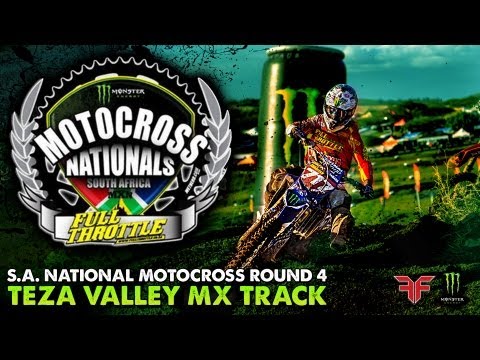