Very seldom does all the puzzle pieces fall into place for a dream weekend of fly fishing. This was the case when my good friend Apie, from Cape Town, organised a clinic for his Port Elizabeth clients; Stephen, Alan, and Craig, at Mountain Dam. 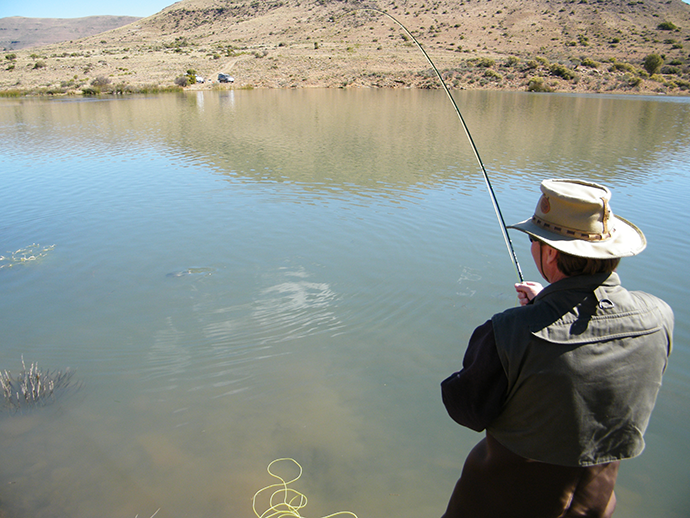 When Apie first started making arrangements for the clinic back in September 2011, the Eastern Cape had just recovered from its worst drought in fifty-odd years and one had to work extremely hard to land a few fish, although a good size. Since then Mother Nature has smiled upon us and we enjoyed good winter rains in 2011, followed by bountiful summer rains and heavy snow falls this past winter. The net result, bubbling fountains and gurgling clear cold water. When building expectations with his clients for this clinic, Apie would drop me a reminder to make sure that our waters were stocked. He would not be disappointed as we had stocked more than 8,000 fish in our various dams and stretches of river in 2012 , including 12-20 cm yearlings, and 16 cm, 60 gram yearlings, followed by a very heavy stocking of about 6 cm fingerlings.

By spring 2012, the water temperatures were ideal; fluctuating between 9 and 12 degrees. Whether it was divine intervention or the sheer genius of Mother Nature, or both, conditions had reached their prime. The crystal-clear snow melt, together with substantial rainfall during winter for the second season had, for the first time ever, provoked our trout to breed in certain sections of the Little Fish River.

Apie’s enthusiasm had definitely rubbed off on the rest of his team in the year building up to this clinic, as everyone had purchased some fly tackle in anticipation of the trip. I say purchased but not yet broken in. The group arrived late on Thursday night to get an early start on Friday, and I had been under strict instructions from Apie to ‘train’ the fish by whistling and have them come to the fly on demand. So whilst enjoying a welcoming drink at the bar, I presented each member a lanyard with a whistle, to summon the fish, and a line clipper to prevent chipped teeth and thus save on dentist bills.

Early Friday morning we headed up the Boschberg to Mountain Dam. It was misty and a fresh easterly breeze stirred up a chop on the surface. Somehow the water exuded an ambiance of expectation or perhaps it was just the excited babble of the fishermen, but the conditions felt right. Alan pumped up his V-boat and was on the water in record time. Apie headed for the rocks at the wall, and Craig and Stephen came with me to target the weed beds. Shrieks of delight echoed across the water as Alan brought his first fish to the net, then another and another. Eventually Apie’s congratulatory enthusiasm from the rocks after Alan’s third fish resonated into a, “Ag nee man!” By this time both Craig and Stephen had managed to bring their first fish of the trip to the net. Apie blew hard on his whistle, but to no avail. So I called him over to join us on the weed beds as more fish had succumbed to the net. What a day! Fifty fish, ranging from 30-46 cm and weighing from 600 grams to 1,2 kilogrammes, were successfully caught and released.

Saturday could not arrive soon enough as morale amongst the group was high. In developing our club waters we have also been able to restock waters, which were stocked with trout many years ago, up in the mountains near Cradock. These waters were stocked with the 16 cm, 60 gram yearlings just one year ago. The drive, climbing to 1,700 metres up in the mountains, is spectacular. The dam is like one of those drop-off swimming pools that seem to be suspended and then just falls off the horizon, except here the dam wall is nestled tightly between two mountains and then falls away with blue mountains on the horizon. Alan remained true to his V-boat and worked every nuance of the dam, enjoying great rewards and the bragging rights of a straightened hook of the brute that got away. Stephen, Craig, and Apie all captured moments of memories that will live with them forever. The phenomenon is that these fish are growing as if they are on steroids, and have reached over 50 cm and weigh more than 2 kilogrammes in just over a year! It is exceptional as were the memories of a remarkable weekend producing over 70 trout and 5 yellowfish.

Fly Fishing Clinics
Angler and Antelope offer clinics regularly throughout the year. A clinic is a tutored day’s fly fishing for anyone interested in spending the day fly fishing, irrespective of their level of skills.

The day begins early with coffee and muffins, and a talk on 'fly fishing with a purpose', where it’s explained what species will be targetted for the day, for example, trout, yellowfish, black bass, moggel, carp, barbel, and so on, the typical entomology at that time of the year, what flies would be used and why, and the techniques to be put into practice. The group then heads out to the appropriate waters to fish. The instructor will move from one angler to the next, to explain where to fish, why they should be fishing a particular piece of water, what fly to use based on the evidence seen in the water, and how to fish that fly. After a lunch break, the rest of the day is enjoyed on the water.

The tutoring, equipment, flies, rod fees, and lunch are provided. The cost is R800 per person for the day, but excludes refreshments or drinks. The clinics comprise of a minimum of four anglers and a maximum of eight. For more information contact .