When summer turns to autumn this change of season is provocative; hot days, cold nights, drizzle or gusts of icy winds, and water temperatures that drop dramatically. This seasonal transformation provokes an awakening in trout behaviour, due to the insects responding to these climatic changes. For the fisherman, this means more productive fly-fishing opportunities and for the fish, an aquatic entomology menu that offers the most variety than at any other time of the year. 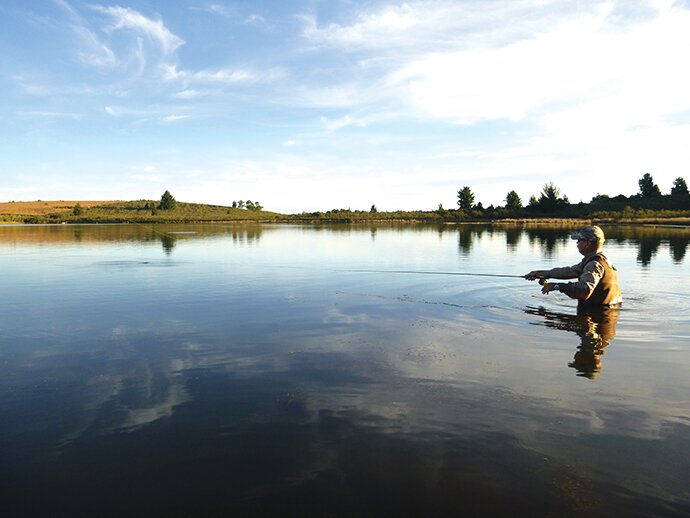 Mountain Dam, on top of Boschberg Mountain in Somerset East, in the Eastern Cape, is one such location that boasts the full package of insects and trout. Standing waist deep in the crystal-clear fountain water, with the sun on your back and fish rising all around you throughout the day, is very close to fly-fishing heaven. Mountain Dam lies 1,500 metres above sea level, whilst the town lies some 800 metres below, and provides a dramatic drop off for its own micro climate. As the wind changes direction, it incites a variety of insect species to hatch throughout the day. These gusts also create thermo clines; layers of water at different temperatures, which trap different insects, at different stages of their life cycles, and at different levels within the water column.

So how do you entice a fish when everything to tempt its palate is available and just waiting to be plucked from the menu? Observation! Look around you and see what insects are in the fringes at the water's edge or which insects are in the air or on the water's surface. Match the hatch. Also remember to keep an eye out for aquatic moths, which are referred to as sedge or caddis, as one often disturbs them in the grass while walking to the water. Look at their size and colour and if you see and hear splashy rises, then chances are good that the trout are feeding on sedge. Often, when you look at a dam you will notice a wind lane. This is the lane where the water is as smooth as a mirror and then meets choppy water. It is in this lane where hatching insects are trapped, offering the full autumn smorgasbord of insects.

Guiding Wes and Bill, visitors from the States, we headed for Mountain Dam on a blustery but sunny autumn day, to see if we could put all this theory into practice. Setting up a #5 weight outfit with a floating line and an 11-foot leader with 4X/8 lb tippet, we all pulled on waders and boots and headed for the weed beds. The odd fish was showing itself, indicating that the fish were scrutinising the weed beds for their main course. We tried a 'Jin Nymph', an olive interpretation of a GRHE (Gold Ribbed Hare’s Ear), and allowed it to sink before retrieving it just above the weeds. Wes produced the first fish, which we kept to evaluate its stomach contents and found several cased caddis, dragonfly nymphs, damselfly nymphs, many caseless caddis and a crab claw. We changed our flies to imitate what we'd seen from the stomach contents and to good effect too, as Wes and Bill caught and released another nine fish between them that morning before we retired to enjoy a typical South African braai of Karoo lamb chops and a cold beer or two. During our break, the wind picked up significantly and the few fish that were moving around disappeared. 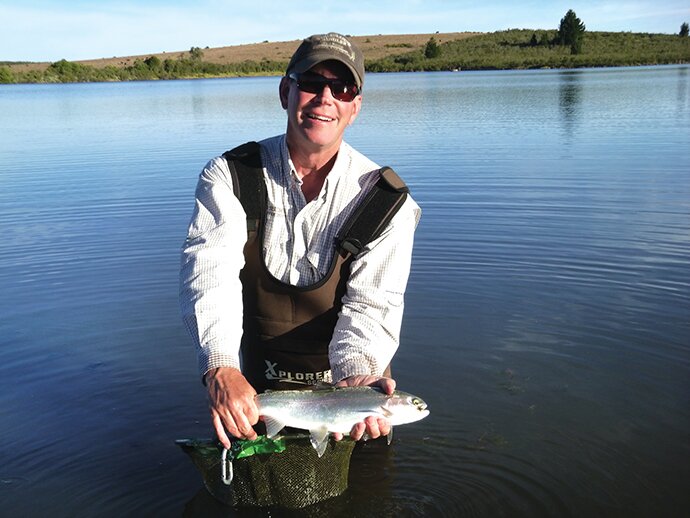 After a power nap, we lazily sauntered back to the water to tackle the afternoon rise. The Gods, Zeus and Poseidon, must have brokered peace with the Goddess Gaia, as the wind dropped to a very light south westerly and a wind lane developed off the weed beds, about 7 metres in from the grass banks. It was as if the peace treaty had flicked a switch and one suddenly became aware of caddis, caenis, mayfly, and midge buzzing around. The evidence of purposeful rises in the wind lane took little convincing that we were on the money. We quickly replaced our flies with a DDD (Duckworth’s Dargle Delight), a South African fly developed to imitate insects on the surface in general, but specifically caddis. The level of excitement shown by both Bill and Wes was evident in the number of rushed casts thrown at the moving fish. If fish fever sets in you are doomed for failure because with so many fish rising, you won't know which rise you should cast to. The excitement can be compounded further when your line is in midair, whilst making a false cast, and you change your mind in the middle of the casting stroke as to which is the biggest rise you should be presenting to. The result, your line collapses in a pitiful heap between the rising fish.

To show BMT (big match temperament), it is best to pick one fish, identify what direction it is moving in and present about two feet in front of it. Seldom will a fish refuse such a great presentation. The reward of a perfect presentation was lost in the babble of both anglers' success as they brought several fish to the net. The visual rush of seeing the fish rise and take your offering is an experience you will never forget. Certainly, Bill and Wes will have fond memories of their Mountain Dam madness.

With so much on the menu, autumn is a great time to head to your nearest trout dam and create your own amazing memories.