The Flyboard- A Water-powered Jet Pack for your feet

The first time I heard about the Flyboard, I was quite busy and only listened with half an ear to the explanations my friend Tor gave me. It didn’t make much sense, and all I recalled later was that it was a rich kid’s toy. 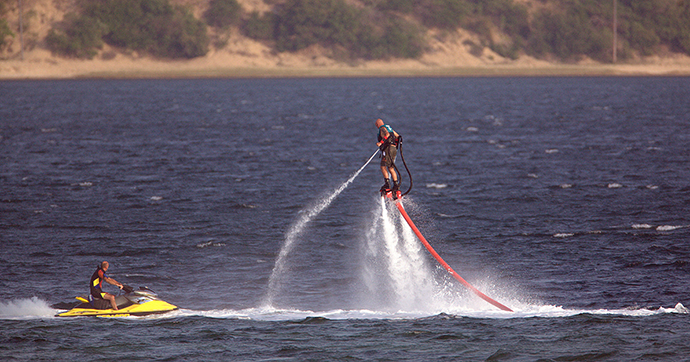 That was in August last year. A couple of months later, Tor came back with a picture showing someone flying through the air, Iron Man style, whilst being propelled by powerful water jets. A light went on deep within the recesses between my ears. So that’s what he was talking about! Call me crazy, but I immediately wanted to be there, zooming through the water and leaping into the air like a human dolphin. I like to see things from high up.

Built in 2011 by water sports enthusiast Franky Zapata, from Marseille, this ingenious device bolts onto the motor (an engine of 100 hp or greater) of any personal watercraft (PWC), also known as a jet ski. It then routes the water jet through a long hose that connects to a pair of jet boots and hand-held stabilisers, thus allowing the rider to fly up to nine metres, do backward somersaults or leap headfirst through the waves.

I love the thrill of being able to leave the surface of the planet. And although we live in a 3D universe, we invariably only move on 2D surfaces. I’ve participated in mountaineering, rock climbing and ice climbing among other sports, but only scuba diving and paragliding has satisfied my insatiable craving for a true 3D experience. So after Tor’s departure, I voraciously watched numerous videos on the Flyboard on Youtube. Some of the demonstrations were really crazy, but I was never under any illusions that I’d become an acrobat by virtue of having the Flyboard under my feet. I just had a visceral need to experience the feeling of being on those jets.

Unable to resist, we ordered the Flyboard from the manufacturer in France at a cost of almost €8,000. It was the top of the range and came with a remote control for the jet ski power on the Flyboard, thus alleviating the need for a driver on the jet ski. After some bureaucratic and logistical delays, Tor finally arrived in Bilene on a cool November morning and we immediately started to assemble the different parts that make up the Flyboard. It took us about half an hour to figure out how everything fitted together, and as we were extra keen to try out our new toy we didn’t install the remote at first. Tor decided that I should be the one to test it first. As he had watched the training videos, he was confident that it would be better if he controlled the jet ski’s throttle and gave me advice on what to do on the board.

Our first challenge was to get to the deep end, well, deep enough for the Flyboard, as the manufacturer insisted that we had to have at least four metres of water under us. The reasons being that when the jets agitate the bottom, stones are lifted and sucked into the inlet of the jet ski; and one doesn’t hit the bottom when falling from higher than intended. After a bit of fumbling around, we finally got going and made our way towards the middle of the lagoon. Now, when the Flyboard is attached to a jet ski, the jet ski is rendered almost useless and merely becomes an appendage that sucks water into and along the pipe, with great force, to propel the rider forward. The direction is set by the rider, who moves the jets under his feet, and the jet ski follows behind.

A short while later, the bottom drops steeply and we are where we want to be, in deep water. Tor slows down and tells me to flip onto my stomach. Easier said than done, as both my feet are firmly ensconced in the boots, and waving my arms seems to have no effect at all. I take a deep breath and then drop one shoulder and my head as deep as I can. Bingo, the leverage from my shoulder in the water gets my whole body turning and I’m on my belly, arching up to lift my head high above water. Tor applies some more power and I feel the jet lifting under me. But my weight is not positioned correctly, so I flip sideways and end up on my back again! Another drop of the shoulder and I flip around again. This time it felt easier. Tor re-applies the power, but again I slip sideways and onto my back. Dang, this is frustrating!

On the next try, however, I get my weight in just the right place and tense my legs to keep them straight. I start to rise up in the water, with my hips clearing first, then my knees and now the whole board is above the water. I keep rising, barely in control, and oscillate this way and that, and I’m far too rigid on the board. A few seconds later, I slip sideways and crash into the water again. It’s no big deal, as I wasn’t that high. But the few seconds I manage to stay up in the air feels like a massive victory. Yeehaa!

I quickly flip onto my back again; this has become second nature already. I’m eager to get above the big blue and that happens quickly too, as my body has already learnt how to find its balance on the Flyboard. I’m up and it feels a little easier than the last time. I manage to stay up a bit longer this time before I make a mistake and lose control again.

For the next 10 minutes I play around, gaining more and more stability, going higher and higher. I’m flying at more than six metres above the surface, three times higher than my height, and then I lose control. The fall takes a long time and gives me enough time to realise that I’ve bitten off more than I can chew because I have no idea how to turn around or spin to control my position at the moment of impact. I hit the surface on my back, hard, and almost wind myself. On my way up to the surface, I quickly evaluate the damage; thankfully nothing is broken. I’m keen to go up again, so Tor increases the power and I’m flying once more. A few more attempts and the exertion finally gets to me. I have to stop.

We swop positions and now it’s my turn to control the power of the jet ski that will lift Tor out of the water and into the sky. His progress pretty much mirrors mine, but he’s not as clumsy and is soon soaring. He lasts as long as I did and although we are both completely exhausted, we are also extremely happy with our Flyboarding prowess.
We have another session later that day and a few more over the following days. In about four days, I got to the point where the movements feel natural. I can direct the board to glide in any direction and stay above the water for as long as I want. We also tried swimming like dolphins, and what a thrill that is! The board can push us at impressive speed underwater and the density of the water lets us get quite a lot of leverage to control the direction we take underwater.

It is really easy to go deeper or shallower, turn left or right and then rise towards the surface to leap out, catch a breath and then dive back down again. That is the part that excites me most; I want to be proficient enough so that I can play with the dolphins in the surf ...

For pricing and more information on the Flyboard visit www.flyboard-africa.co.za or email Tor directly at