Is it my lack of attention to detail or is the ‘all new’ Civic Hatch no different to the outgoing model launched way back in 2006? The basic triangular silhouette shape looks pretty much the same to me, but from what I've read in the press, the new Civic is more aerodynamic due to an array of clever cosmetic enhancements like the new tail light cluster and a horizontal brake light that acts as an airflow-directing spoiler. The 2012 model is also 20 mm lower and 10 mm wider, producing the roomiest interior of any C-segment car. 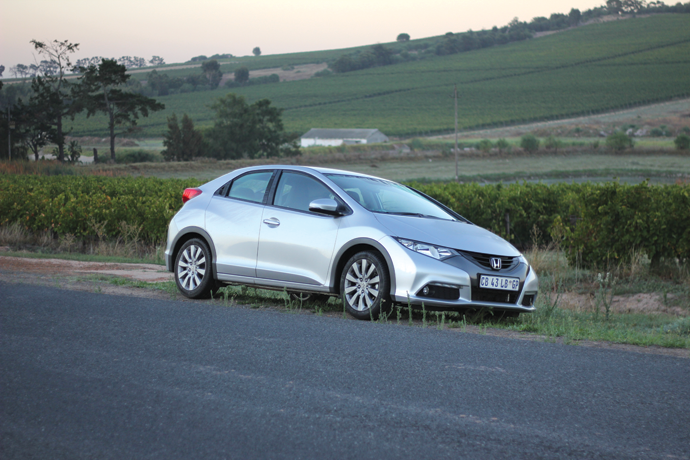 To me, the Civic Hatch is still one of the best-looking hatchbacks in South Africa. I like the rear doors’ hidden handles that fooled my wife into thinking it is a two door: mission accomplished and one-zero to the Civic. I do, however, miss the triangular tailpipe end pieces protruding from the backside of the old model. But then again the new Civic has a prettier face.

The futuristic interior, with the same flashy blue rev counter and digital speedo in front of you, as found in the sporty CR-Z Hybrid Coupé, lets you feel like you’re a pilot in a spaceship. Combined with racing-style pedals, I was rather let down by the lack of oomph when I tried some quick lift-offs.

That is until I remembered switching on the green ECON Assist button when I initially got in. In ECON mode, the gear indicator teaches you to drive economically and the 1.8-litre, 16-valve SOHC i-VTEC engine is tuned for frugality. This was proven by the 7.4 l/100 km reading from the centre control screen. Not bad for an eighteen hundred, but far off the claimed consumption of 6.3. Switching off the green ECON button with the flower on it, the 104 kW and 174 Nm of torque is enough for a very engaging drive. It revs freely to the soft limiter at around 6,500 r/min and the gear changes, via the six-speed manual, are slick and direct. The steering is smooth, but feels a bit light, which scores points in the comfort stakes. However, a bit heavier weighting and more feedback would have been nice.

In the Executive model, you get heated front seats, climate control, an easy-to-use multifunctional leather steering wheel, cruise control and a rear-parking camera. I always try to figure out all the functions without looking in the manual and try as I might, I could not find the hands-free Bluetooth connection for my cell phone. It might not have been an option on my car (there was a USB cable connector in the centre cubbyhole), but if it was, it was not easy to find. Everything else was instinctive to use, as is the case with all the Hondas I’ve driven. You really feel at home in the car and the blue lighting that emanates from the door pockets adds ambiance. The only gripe I had was the annoying reflection of the intelligent Multi-Information Display (i-MID) bouncing from the smooth dash to the windscreen at night. Even if you switch it off, the not-entirely-black screen is still visible just to the left of your line of sight.

The Civic is one of the safest cars in its class, with the maximum stars in the new Euro NCAP tests, and comes with all the safety features we’re used to these days.

The boot is big, gulping up 401 litres of luggage, and so is the rear legroom. As always with Honda, you just know you won’t regret buying it. I enjoyed the Civic Sedan when I tested it last year and the Hatch is no different, expect in one way. It is good to look at too. At R274 400, I could not find a direct competitor in this hotly contested C-segment, as the closest actually-all-new Auris from Toyota, the seventh rendition of VW’s Golf and Opel’s Astra all have smaller engines at smaller prices or turbo-charged engines at higher prices. As with smart phones, even though the prices are hard to compare, you usually know beforehand which one you like best. Regardless of your choice, I am sure you’ll find a way to justify it. 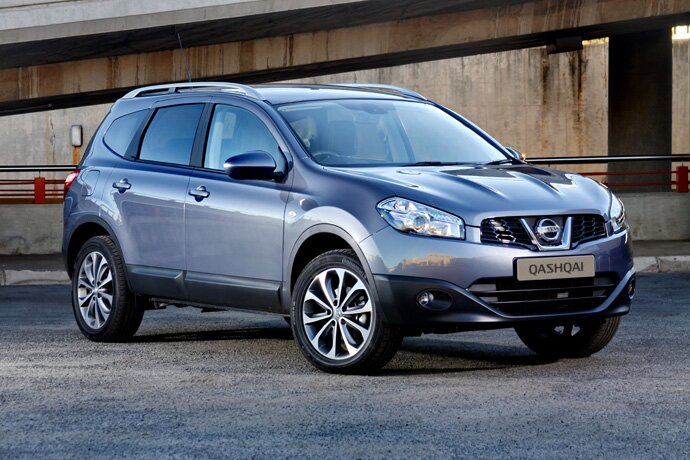 To sum up the Qashqai: it’s hard to pronounce and easy to like. Unlike the Hyundai iX35’s weird styling, the Qashqai is pretty from the first time you see it. None of the angles look awkward (to me at least) and it is the perfect balance between practical space and stylish good looks. The appearance of this everyday family van is successfully disguised by twin creases on the bonnet and integrated spotlights next to a large air dam at the front and hunkered hindquarters at the rear. The diamond-cut 10 spoke rounds off the aggressive look.

The +2 version was introduced in 2010 with jumper seats folding out from the flat load bay. With all seven seats in use, the luggage space equates to 130 litres, but this can be stretched to 450 and a massive 1,520 litres with the third and second rows folded away respectively. Apart from this versatility, a generous 200 mm of ground clearance means you need not limit yourself to the roads more travelled. When you do leave the black top behind, just remember that you are on 18-inch alloys shod with low profile rubber and the fifth wheel on the wagon (sixth if you count steering wheel) is a space saver of the Marie biscuit variety.

The 2.0 Acenta’s 102 kW and 198 Nm of torque are sent to the front wheels via a six-speed manual gearbox. Unlike the Civic, the claimed and actual fuel consumption was much closer to each other, with me returning around 8.7 l/100 km in mixed driving conditions. Not bad for a 2-litre petrol with seven seats. Even though you sit fairly high, there is limited body roll and generally the on-road handling is quite good. My wife sat in the middle row of seats with our newborn baby and commended the crossover for high levels of comfort. The long wheelbase is no doubt partly responsible for this.

The interior is rather sparse and it seems built to budget, though it has an integrated audio system with remote controls on the multifunction, leather-clad steering wheel. The facia and door panels are covered in soft-touch plastic, which adds a quality feel to the otherwise basic cabin. The cloth seats, which are manually adjustable, are perfectly comfortable and other conveniences include cruise control, rain-sensing wipers and brushed metal roof rails. Safety features are also in abundance, with off-switchable Vehicle Dynamic Control (VDC), driver-, passenger-, side- and curtain airbags, as well as ABS with EBD and BAS.

What I like most about the Qashqai is that even though it has a fancy tongue-twister of a name, it is styled to stay in fashion and no money was wasted on niceties inside, such as electric leather seats and touch-screen displays.

Above all, it is a practical mode of transport at a reasonable price. At R333900 for the top of the range model, it’s about twenty grand more than the 211 mm shorter 2.0 Acenta.