Johannesburg is the largest city in South Africa, and although it is not one of the three capitals, in Gauteng alone there is 11,328,644 people. That’s 22.39% of all the people in South Africa, and in a time of stress and fatigue there aren’t any beaches to visit, no mountains to climb and no rivers or lakes to swim in. In fact, Johannesburg is the only large city out of the 50 largest cities, internationally, which isn't situated near a river, lake or coastline. So where do we urbanites escape to when it's needed? 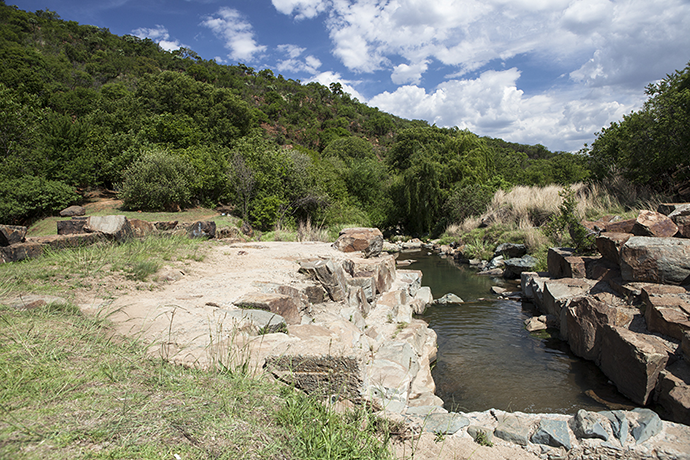 Johannesburg City Parks has been working since 2000 to create and maintain 22,278-hectares of luscious, open space in and around the bustling city. Green living is what is needed to sustain our world, but more than that we need to sustain ourselves. It is a proven fact that the stress levels of people living in cities are much higher than those staying in more rural or open spaces, and to keep ourselves sane we need to take a break from the chaos of city life. There are about 25 parks that are considered the jewels of our green city and the use of these parks is very diverse, from corporate events to having a picnic and so much more.

Kloofendal Nature Reserve: I recently explored one of the oldest parks, Kloofendal Nature Reserve, a huge 110-hectare park located in the quiet suburb of Kloofendal, just a five-minute drive from Clearwater Mall in the West Rand. As you enter the park, a monument dedicated to the Struben Stamp Mill stands tall. The mill was brought here from England in 1884 to mill ore from the surrounding gold reef, and turned into a monument after its working career. Walking further into the lush, green nature reserve, the sound of every kind of bird, it seems, overwhelms the senses.

The park offers various activities, as well as organised walks and talks. If you're in the mood for some bird watching, there's a trail that leads to a bird hide overlooking a verdant water source that attracts the local bird life in droves. Further along the trail you pass an old mine shaft (tours can be arranged) and there's also a stone amphitheatre surrounded by floodlights, a large community lapa for braaing and relaxing, and ablution facilities.
Other parks, where you can enjoy the same and more, are located all around Johannesburg. Starting in the northern suburbs and working clockwise, the biggest and best parks in Johannesburg are:

Ivory Park: This is one of Johannesburg's biggest parks and in 2007 the UN honoured Johannesburg City Parks with the Liveable Communities Award, as it is a first-class park in the middle of a poverty-stricken area. That makes absolutely no difference though, as the residents of this lovely park appreciate it and use it for all kinds of gatherings, screenings and corporate events.

James and Ethel Gray: Situated a stone's throw from the Bidvest Wanderers Stadium in Birdhaven, bordering on Melrose Arch, this stunning park recently received a R5 million facelift. It is named after early Johannesburg historians, James and Ethel Gray. It is a well-known birdwatching hotspot due to the Sandspruit River that journeys through the 36-hectare park, to create a sanctuary for the local bird life. Landscaping incorporates both indigenous vegetation and neat lawns, and there are meandering walkways and new ablution facilities. It is completely fenced, and ideal for filming commercials, small corporate events and photography.

The Wilds: Set in the lovely hills of Houghton, The Wilds is the perfect place to arrange small corporate events, weddings and other activities that require a pristine backdrop. The evergreen park has a mix of stone walkways that lead up and around the 16-hectare area, and is great for peaceful strolls to take a break from the rat race. If, on the other hand, you'd rather admire a stunning city view, there's no better place to see Johannesburg's skyline than from the sundial, at the peak of the park. As a nature reserve, events here are limited to ensure the natural flora and fauna are protected.
Rhodes Park: Stepping stones and railway sleepers take you through this neatly-kept, moderately-sized park. There are ponds and waterfalls to enjoy, and adding to its special appeal is a small amphitheatre where musical and theatrical performances take place on occasion.

Joubert Park: Located in the city, it is Johannesburg's oldest park and dates back to 1887. Mr. Joubert was the town’s first mining commissioner sent to Jo'burg to investigate the gold rush claims of fortune seekers. Boasting an average of 20,000 visitors each month, it is without a doubt one of the busiest parks. This is not surprising as it comprises the Johannesburg Art Gallery and Conservancy, has a lovely fountain, large-scale chessboards and maintains some of the city's innovative environmental developments on its grounds. It can handle groups of 500 or more people, and is ideal for photography, filming commercials and small corporate events.

Klipriviersberg Nature Reserve: This 680-hectare nature reserve is situated 11 km south of Jo'burg's city centre, and comprises mainly open veld and koppies. There are several nature trails and hikes to choose from, the longest being a nine kilometre route. A variety of wildlife can be seen; the park is home to 150 bird species, 600 plant species and animals such as blesbok, zebra and duiker are spread out over the large reserve. If South African history interests you, Klipriviersberg is known as a place of the largest concentration of identified Iron Age sites on the Witwatersrand. There are remains of a BaTswana village and the walls of a house that belonged to Sarel Marais in the 1850s. This reserve is well suited to large and small corporate events, filming commercials and photography.

Dorothy Nyembe Park: Named after the well known 1950s ANC activist, this 26-hectare park was renovated in 2003. Some features include a bird hide situated in a natural wetland, which feeds the clear dams, as well as braai facilities and a children's play area. There's an amphitheatre for local shows and plays, netball courts, a football field, volleyball court and basketball court, plus areas to play chess and morabaraba, a traditional African board game. In 2007, the Dorothy Nyembe Environmental Education Centre, the first of its kind in a township in South Africa, was awarded gold at the UN Liveable Communities Awards in the category of Natural Built Project.

Delta Park: One of Johannesburg’s biggest parks, this 104-hectare grass and woodland paradise is also one of the local residents’ favourites. There are walking and mountain bike trails that flow through the park and past three tree-lined dams. The Braamfontein Spruit Trail, popular amongst mountain bike enthusiasts, travels from Emmerentia, through Delta Park and towards Rivonia. It's a wonderful track to ride if you don’t have much time to get out of the city. The Florence Bloom Bird Sanctuary is also integrated into the park and there's a sensory trail and bird viewing hides. The Delta Environmental Centre offers a wide variety of wildlife-related courses to adults and children, as well as holiday programmes for children aged six to thirteen. Professional staff members take care of the educational needs and about 20,000 children are taught here every year.

These are just a few of the best parks known to Johannesburg, which are all very well cared for and there to be enjoyed by everyone.

So don't leave Jo'burg the next time you feel the need to relax and enjoy nature, be pleasantly surprised by the diversity that Johannesburg City Parks offers right on your door step! •

All info can be found at www.jhbcityparks.com or email .