The Lembeh Straight - A Muck Place to Dive

A definition of muck diving, which I have made up based on experience and a number of web-based definitions, is as follows: A highly sedimented (often black resulting from volcanic lava), sparse landscape relieved by the collections of dead coral, discarded fishing equipment, rotting vegetation and all manner of man-made waste. 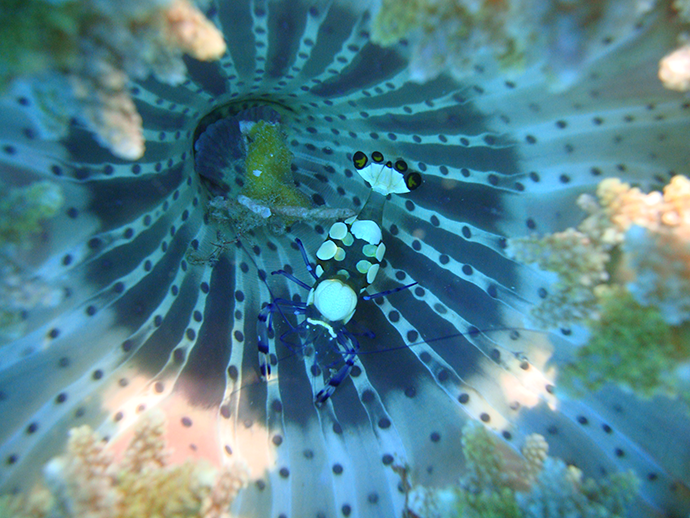 Sounds absolutely terrible right? So why on earth did Laura and I, like thousands of other divers, plan on visiting such a place for our Christmas holiday? The answer is simple - if not believable based on the description above - the muck is the perfect environment for unusual, exotic and juvenile organisms that frequent every diver's ‘bucket list’ of things to see underwater.

Laura and I arrived at Kungkungan Bay Resort (or KBR), situated on the northern Sulawesi coast and midway along the ocean straight that separates the island of Sulawesi from the island of Lembeh, for a highly anticipated four days of diving, and more precisely, muck diving. KBR was a brilliant location from which to dive Lembeh and being greeted with an ice cold beer made for a perfect start. The super efficient and friendly staff got the formalities out of the way with a quick introductory briefing about the resort and then left us to while away the evening as we gazed out over the gentle lapping waters and twirling current eddies and watched the tide quietly rise into the Lembeh Straight.

If we thought the resort was beautiful at sunset then we were blown away as we experienced it at sunrise the next morning. The chocolate chip pancake breakfast - and every meal thereafter - was amazing, and the extensive menu catered for all tastes with eastern favourites such as nasi goreng and sashimi, to western favourites such as burritos and hamburgers and everything in-between. Every day presented us with an additional 'test' menu, with new items that the kitchen thought might be interesting, as well as a nightly special that was deliciously local. Our favourite item was one of the 'test' menu items - gohu tuna - made with fresh, raw tuna and served with lime juice, peanuts, onions and basil. Delicious!

That first morning, the sun was bright and beautiful as we rose early for our first dive. During our arrival briefing we were informed that not all sites in Lembeh are muck sites. We could expect muck, coral, sand and wrecks, all of which made for a dive location with a higher concentration of marine life than the Great Barrier Reef. We were told that all guests could put their creature wish list on the dive boards so the guides knew what to try find for us - and let me be clear on this as a diver who does not like diving with dive GUIDES, there is no way you will find these bizarre creatures without the unbelievable eyes and experience of the Lembeh dive guides. When we finally did get underwater, the diving was unreal. Firstly, and a little disturbingly, we did not expect that much rubbish. Laura and I both started in our normal conscience diver mode and picked up the first few pieces of rubbish we found - naïve. Interestingly, once we acclimatised to the very different seascape, there was a strange beauty in the lava-blackened sand and explosions of life occurred where least expected. On our first dive (and for the next two) we found nothing, luckily our dive guide, Ade, was significantly more skilled than us and we started racking up a list of the most crazy sightings. Our very first, and probably one of the weirdest of all, was the pegasus sea moth. In the interest of giving you a view of what our ‘wish list’ should have looked like, these are the strange creatures we saw just on the first day, which consisted of four dives and the last being a dusk dive.

Particular mention that day was the dusk dive we did, with the specific aim of seeing the mandarinfish. Normally these tiny fish are nigh impossible to see except at dusk when they emerge for a short period to forage and mate in and around patches of broken coral. This is all the more exciting as the mandarinfish is brightly coloured in blues and oranges, contrasting to the dull colours of the dead coral at dusk.

Normally a diver is ecstatic with a single spotting of these elusive little fish after quietly watching their known habitat for sometimes as long as an hour. Even more rare, and cause for even more excitement, is if you are lucky enough to see the fish find a mate and perform the mating ritual. Once again Lembeh proved to be a cut above and we waited for less than five minutes for the first mandarin to appear. It was followed shortly by no less than six mandarin constantly swimming among the coral stags for us to watch. After about 30 minutes the dominant fish - a relatively massive fish at about eight centimetres - began the first of what would end up being in excess of 10 mating rituals with some of the other mandarins.

We ended up doing 10 absolutely breathtaking dives out of the 50-plus dive sites and with the exception of not seeing the elusive blue-ringed octopus and mimic octopus, our sightings were beyond anything we could have imagined. From this list, we've compiled a few categories of our favourites:

Smallest creature:
Hairy shrimp (about the size of a flea)

With another amazing dive location added to the constantly changing top five dive sites in the world, all that is left to be said is … what a wonderfully weird world.

• Lembeh is an hour-and-a-half drive from the Indonesian city of Manado. Manado is accessible via flights from ingapore and Kuala Lumpur, both of which can be reached directly from South Africa.
• A 30-day Indonesian visa can be obtained in Manado on arrival.
• Lembeh can be dived all year round, but the best visibility is between October and December.
• Water temperature ranges from 25 degrees in July to 29 degrees in December - perfect for a shorty wetsuit.
• January and February are the rainiest months.
• Lembeh is ideal for underwater photography enthusiasts.
• For more information on Kungkungan Bay Resort visit www.divekbr.com.