Any true biker will tell you that there is very little in this world that can give you the same feeling as throwing a leg over a steel horse, starting it up, and going wherever the road takes you. Now if you are a weekend warrior like me, combine that feeling with some unspoilt terrain and your friends joining you on a ride, well, life just simply doesn’t get any better. This is exactly what happened when my friends, Chris and Gerrit, and I received an invitation from Peter Pyper, the owner of Gone Skiing in Fourways, to explore the area surrounding Afriski, a resort situated high up in the north of Lesotho. Before you could say ‘two stroke’, we were packed and on our way to Lesotho, a masterpiece of unbelievable mountain terrain. The area demands respect and is sure to test your technical skills to the max on the many tracks that crisscross this Mountain Kingdom. 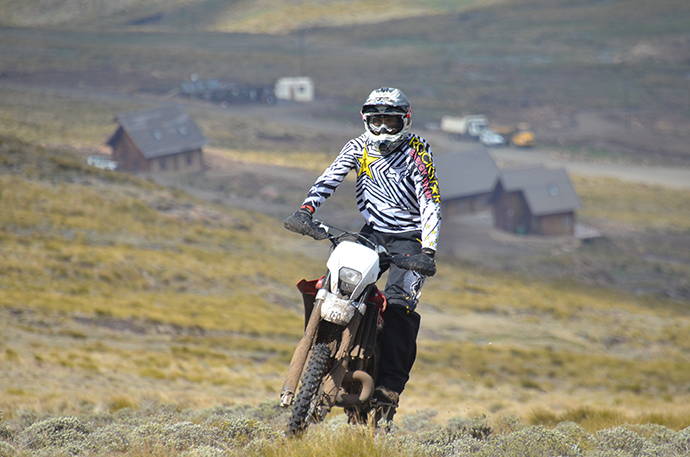 We were in our element as we cruised along towards the resort, our excitement mounting by the kilometre. Just a word of advice though to first time visitors to Lesotho; ensure you obey all the road signs and speed limits because if you don't and get caught by the local authorities, you will pay for even the smallest of misdemeanours.

The 75 km road to Afriski takes you over an amazing and seriously high pass called Mauteng Pass. There are a few tight corners to contend with, so you need to take great care and be very alert, especially on the way down. En route, you will notice a few cars lying in some very unpleasant locations, and you definitely do not want to add yours to the statistics. Once you reach the top, it’s only a few more kilometres to Afriski.

We arrived at Afriski and were welcomed by Martin Schultz, our terrain guide, who took us through his plans for us. He has a vast amount of tracks marked on his GPS and without his knowledge we wouldn’t have experienced half of what we did in our two days at the resort. After our briefing, we checked into our very luxurious log cabins, changed into our riding gear, and were ready to ramble.

Martin first took us on an ‘easier’ ride to make sure the bikes functioned well at 3,500 m because at this height two stroke bikes normally have an issue, and without the correct jetting it can end your trip right there and then. Heading to the south of Afriski, towards Oxbow, it soon became apparent that the rocky terrain would make up most of the sections we would be riding. Picking your line on the uphills was important because getting it wrong could make life a whole lot trickier. Once we were comfortable in the technical terrain, Martin took us on a track labelled the Tower Route, to give us a taste of what we would be dealing with the next day. The track was nice and flowing, and I really started to appreciate the power of the two stroke Husqvarna WR250 I was test driving. With its plush suspension and responsive power, it made easy work of the jeep tracks. The bike was also easy to handle and I was impressed by how effortless it was to control over the rocky ground.

We completed the loop in about two hours and then headed to the Sky Restaurant, to discuss the ride over some local Maluti Beers. After a fantastic dinner, we turned in to get some rest before tackling the Amphitheatre the next morning. This track is said to be one of the best rides available to the intermediate rider who likes a challenge.

The route kicked off with some nice flowing jeep track and we soon settled into a good, steady rhythm. Martin set a fast pace and it was exhilarating to try and keep up with him as he wound his way through the mountains towards Mont-Aux-Sources. With mist cascading down the mountain and visibility becoming an issue, Martin decided to push on. We traversed the top section of the legendary Drakensberg Amphitheatre, riding into more technical sections as we went along. After a few river crossings, Martin stopped at the bottom of a hill with a bit of a smirk on his face. “Right boys, this is Panino Hill. Choose your line carefully as there's 1,000 points for anyone that makes it up the hill first time!" At first glance the hill didn’t look intimidating at all, but that was a bad judgement call from my side because as I began to climb, I quickly had to divert to an unplanned route that had me holding on for all I'm worth. But I made it and happily collected my 1,000 points. Standing atop the hill and looking down afterwards, I was very relieved to have made it the first time and not still be fighting my way up.

Martin led the way down Break Knee Hill, a name given to what can go wrong if you don't concentrate on all the rocks that lead to the bottom. I found the descent to be extremely exciting and kept as close as possible to Martin so I could follow his line. Some of the rocks hidden in the grass surprised Chris and he was fortunate not to injure himself.

Martin then told us we would continue descending into the valley to reach the notorious Two Stroke Hill, the 70 km landmark on our route. This would be the final test on technical terrain because if we didn't get over it, we would have to turn back and run the risk of running out of gas. Getting to Two Stroke Hill offered another great piece of riding terrain, as we had to cross a few slippery river sections and traverse over cambered hills. From the bottom of the hill it was a long one-kilometre climb to the top, so Martin suggested we break the hill down into manageable chunks. Somewhat apprehensively, I started the climb and rode as cautiously as possible to stay on my intended line. I soon realised that the hill had other ideas, as I was thrown all over the place when trying to get across or around the rocks. My only option was to work hard and ride offensively, as any deviation from this new plan could result in the bike getting stuck in one of the many booby traps that were waiting to claim their next victim. With Martin showing the way, it took me about 10 minutes and three stops to reach the top, and the feeling of achievement was awesome and the view spectacular.

With the group showing signs of fatigue after an unbelievable four-hour ride, we headed back to the resort. I still had some energy left in the tank, so I worked the bike through the mud holes and rocks, and felt incredibly privileged to be riding in such amazing terrain.

Back at Afriski, everyone was talking about what section was the best to ride through, and by the end of the debate we concluded that the entire ride was a combination of just the right stuff. Nice and easy to get you going, and tough and hard to remind you that you had ridden in the Mountain Kingdom of Lesotho. But overall, a ride fit for kings!

Afriski is a fantastic weekend-warrior paradise, and with so much adventure on offer you'll probably end up booking your next trip before you've even left the resort. The team is also very professional and the overall experience is most definitely worth the effort of getting there. So what are you waiting for? Call your riding buddies and book a riding trip at Afriski now!

We tested the Husqvarna WR250 (Two Stroke) over the two-day ride in Lesotho. During the test ride we rode over a wide variety of terrain including gravel roads, jeep tracks, river crossings and technical mountain sections. We found the bike to be a great weapon when tackling traditional off-road terrain, as it was fast, nimble, well balanced and equipped with a powerful engine, which all combined to make it a great ride. However, I missed the electric start and extra power outside the power band in the slower, more technical terrain.

We believe the Husqvarna WR250 is well suited to anyone who loves a powerful power band two stroke bike. Complemented with a very good suspension and the pedigree of a renowned Swedish brand, it's a package deal that shouldn't be ignored if you are in the market to buy a new bike.

For more information contact Husqvarna directly or one of the many dealers countrywide.

Visit the Afriski website,
www.afriski.za.net for more information on the riding options, and also book your ski/snowboarding trip for winter 2013!