Motocross Revs it up

It's a new year and a new season, and that means it's time for the second annual Monster Full Throttle Nationals! But before I tell you what 2013 has in store for us, let's take a look at how the 2012 season panned out. 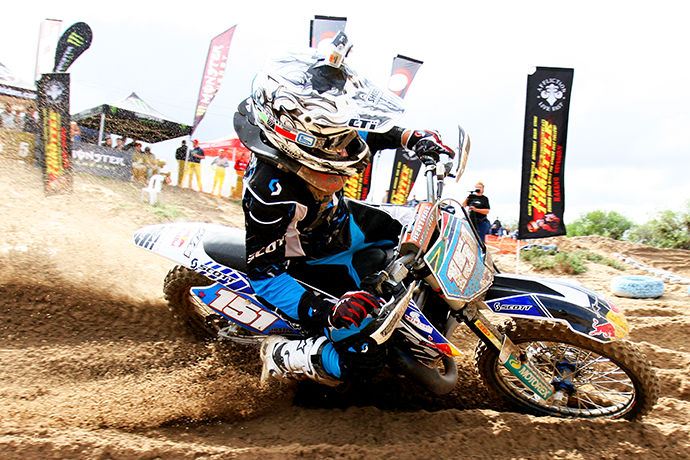 The 2012 season proved to be the start of a new era for South African motocross with most of the riders joining the new motorsport body, WOMZA. Despite big politics in the background, the sport grew in numbers and this was seen at last year's first national held at Sun City where there was around 220 entries. Sun City was also WOMZAs first attempt at overseeing a national and having to deal with the elements. Heavy rains turned the soil into slush and the riders had great difficulty just getting out of the start blocks. However, rain was a common theme throughout the Full Throttle Nationals, with four of the six rounds taking a pelting; but this was actually a blessing in disguise as it helped settle the dust.

I had the enviable task of covering the inaugural Full Throttle Nationals, and being a first for me, the series was a great learning curve and hugely memorable. One of the most memorable events for me was the flag start at Sun City, because the riders in the MX2 class were overly eager to get going and kept snapping the gates in half. So the good ol' flag was reinstated.

A new track was added to the circuit, that of Teza in Richards Bay. It's the best viewing track, with many hills, and there's always an amazing atmosphere. And with Monster Energy as one of the official sponsors for 2013, it's going to be even more of a party.

The PS Honda team had a great 2012 season, clinching major victories throughout the year, including Anthony Raynard finally achieving his long-time goal of becoming the MX2 South African Champion. It was also the first time in many years that two Cape Town riders brought home the #1 plate in the MX2 class. And then there's 10-year-old Justin Sangster, in the 50 cc class, who is in a class of his own! He also competed in the 2012 Junior World Championship and came 10th overall. Justin will be spending a lot of time in Europe in 2013 gearing up and competing in the Junior World Championship again.

There were a few great riders who left our shores to represent South Africa, like Calvin Vlaanderen and Ryan Angilley. Calvin left shortly after Sun City to join Bobby Schmidt in Holland for the Dutch Championship, and he's since returned to Holland to race the full 2013 Dutch season. In my opinion, Calvin is another champion in the making. Ryan Angilley left for the States to start his career, and he's doing really well and starting to qualify for some big races. But the flow was not just one way. It was fantastic to see a number of South African riders, who were competing overseas, return to take part in the local races, such as the Teza Nationals.

There was renewed interest and support from spectators and companies, and the media came on board too. The sport received a lot of coverage in magazines such as DO IT NOW and Dirt & Trail and the exclusive national motorsport newspaper, MOTORSPORT WORLD. KFM Radio also got involved at the Cape Town Nationals. On YouTube, you are spoilt for choice with loads of action clips posted by our local lads, as well as incredible photo galleries that bring life to the sport. The new website mxsa.co.za made a great impact, receiving up to 15,000 hits a month from local and international visitors; which means that the eyes of the world are upon us, especially seeing as South Africa has five World Championship titles.

This season is set to be even bigger and better, due to WOMZA making it possible for every rider, from the pros to beginners, to be a part of this incredibly exciting sport. This was seen at the first local race of the season, where we had more than 120 entries. We last saw this many entries in 2005, so it just goes to show what fresh blood, better entry fees and medical services, improved standards and event organisation and increased financial support can do for a sport.

The Full Throttle Nationals series is taking on a new format this year and will be held over two days. This is sure to make it tougher for the riders, as the track will be rutted and hard to ride by day two, but it will make for great spectator entertainment. Each national will also be broadcast on the 2Wheels programme on SuperSport 6, so for those who are unable to get to the events, you'll be able to catch all the action from the comfort of your armchair!

Our local races are attracting international competitors, such as Kennedy, who was brought in from England this year to race against South Africa's finest. The last time this happened was in days gone by, when the likes of Camel-sponsored rider Rocket Rex Staten, from America, came to race and help promote motocross in South Africa.

A VMX (Vintage Motocross) class will be added as a support race for the regionals. VMX is the fun side of this sport, and is where the guys get to show off their old bikes that have been beautifully restored to their former glory.

We will also see the international Red Bull X-Fighters coming to South Africa on 31 August for their final stop, and it's this kind of high-profile event that breathes new life into motocross.

So what can we expect from the riders this season? Well, we'll see 25 riders from Cape Town making their presence known on the national circuit this year. This is a significant increase over last season.

Triston Purdon, the Pro Mini Champ, is moving up to the 125 cc class, and with Triston out of the way, his teammate, Dirco van der Westhuizen, will be looking to claim his first SA title in the Pro Mini class. This class is one of the most exciting to watch as these young riders are fearless and don't know how to hold back.

There's also been growth in the 50 cc class, with 25 more new, young riders, some as young as four years old, joining the ranks.

The number of competitors in the MX2 class is also on the increase. At the 2012 Cape Town Nationals, there was 36 riders at the gates, something we haven't seen in many years either. I'm confident that 2013 will be the year where we see 40 riders on the gates, as it was in the hey days of motocross.

Riders to look out for include Caleb Tennant in the MX2 class, who sat out last year due to an injury. But he's fit and has the experience gained in America to see him off to a good start. With Caleb back in the fray, Anthony Raynard will have his hands full. In the MX1 class, Wyatt Avis will be keen to stake his claim, having come third overall in 2012.

But the big name in this sport is Richard van der Westhuizen, 10-time South African Champion and the most decorated rider under African skies. However, he'll need to keep a close eye on rival Kerim Fitzgerald, who spent last year racing in the AMA Outdoor Series and SA National Championship.

We say goodbye to Michael Kok, aka 'Kokstar', who retired due to personal reasons. Kokstar was one of the most entertaining riders on the circuit with his sprinkler move, a great crowd pleaser. Will this be the last we see of him? All too often in this sport, those that leave return because once you have ridden an MX bike, you're hooked! Another MX2 rider, Brendon Flemming, will be making his way to the States to race. Even though we don't like to lose our local talent to the international circuit, when they return, the experience gained helps raise the standard of motocross locally.

On the down side, Honda South Africa had decided not to have a team this year. Although the Honda team will be sorely missed, we'll still see the riders in action. Look out for Anthony Raynard who has moved to Kawasaki and will continue the battle to keep his number one plate.

So with such an exciting field of riders, 2013 is going to be a great racing year! And thanks to DO IT NOW for your eagerness and contribution to motocross in South Africa.

The first national took place at Dirt Bronco in Krugersdorp on 23 and 24 February, and it was awesome! So come join us for the next event on 30 and 31 March at Melkbos 4x4, in Cape Town, for two action-packed days of racing.

Until the next time, keep those pistons singing.