Team Merrell successfully defended their Expedition Africa adventure racing title with a hugely impressive win, by finishing nearly 12 hours ahead of their nearest rivals, Team Red Ants. After 65 hours of racing – and just three hours sleep - Team Merrell crossed the finish line at race headquarters in Port Alfred at 11:49 p.m. on Wednesday 9 May. An amazing feat considering that the organisers had predicted it would take the winning team approximately three days to complete the course. 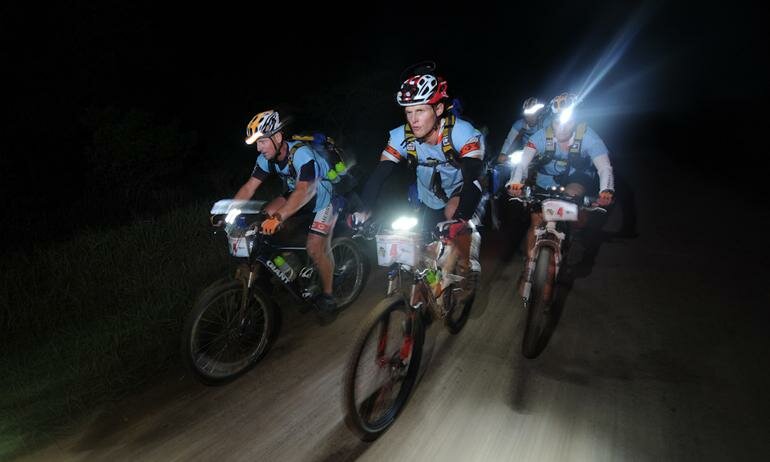 The second edition of Expedition Africa, now part of the World Adventure Racing Series, was set in the picturesque Eastern Cape town of Port Alfred. Race organiser, Stephan Muller said, “The beauty of the surroundings is in its rawness and this provides some really challenging terrain that would certainly test the 13 teams who started.”

The race began at first light on Monday 7 May at the toposcope in Bathurst, the highest viewpoint affording competitors a convenient 360 degree view of the 500km race route ahead. Huddled together against the cold, the sound of a vuvuzela announced the start of this epic race.

The 17km orienteering leg saw teams having to collect six Orienteering Points (OPs) in any order, which had been spread throughout the historic village of Bathurst. Once retrieved, the teams headed into the veld in search of the next OP. Team Red Ants took a direct route to the OP to arrive two minutes in front of Team Merrell, who along with most of the teams had chosen to take the road to this point. However, their lead was short lived as Team Merrell, under the experienced navigation of Captain Graham ‘Tweet’ Bird, immediately showed their class as South Africa’s premier adventure racing team with some shrewd navigation. A decision to take a hidden hiking path saw them gain 20 minutes on Team Red Ants by the end of the first transition, and it was to be the last time Team Merrell came close to any of the competition throughout the 500km race.

With a good lead on the rest of the field Team Merrell took advantage of the out-going tide to give them a further edge on the field. Unfortunately for the mid to rear teams, the tide changed during the morning and slowed them right down. With the sea too rough to paddle to Kelly's Beach, boats were left at The Halyards and competitors had to run the remaining 4km to T2. Red Ants finished this leg 13 minutes behind the leaders, followed by team Olympus, who were 13 minutes behind them.

Following a route that traversed the rugged coast south of Port Alfred, the teams had to face a tough swim across the Kariega River to reach the TA. Although most teams found the hike relatively straight forward, their calves were tested and aching after hiking across patches of soft sand. The swim proved more arduous, with the current sweeping teams off course. Team Merrell powered ahead to increase their lead to 42 minutes, while Red Ants opened up their lead to 88 minutes over third placed Olympus.

This leg on the Kariega River passed through several game parks and teams were urged not to sleep on the river or banks! This was good advice too, as there were reports of elephant sightings. With the sun setting all the teams were racing flat out, but once again Team Merrell continued to dominate and just 12 hours into the race they had completed 4 of the 13 sections.

The gruelling pace set by the leaders had resulted in a spreading out of the teams. Despite a fairly straight forward hike, navigational challenges were testing the teams and thick fog made it all the more difficult for those in the mid pack. Most teams managed to reach the end of this trek during the night, before preparing to take to the water for the kayak down the Boesman River.

As the second longest tidal river in South Africa and longest boat navigable river in the country, the paddle was far from easy. A combination of low tide and fog led to the teams battling to find the main channel and as a result they found themselves running aground. Dragging their kayaks over the banks in knee deep mud, many of the teams ended this section looking tired, but very happy to be off the water.

The 80km inland ride to the roping/canyon point was technically easy, but over rolling dirt roads. A rapid midnight transition at the mouth of Bushman's River saw Team Merrell get onto their bikes for the first time. Finishing this ride at 05:52 a.m., Team Merrell’s female powerhouse, Tatum 'Hobbit' Prins remarked that this leg had gone really well, allowing