It is no surprise that the football-mad Brazilians were the ones who came up with the idea of footvolley; an action packed, fun and exciting sport played globally. Similarly, it comes as no surprise that this sport is also taking off in a big way in our football-loving rainbow nation. 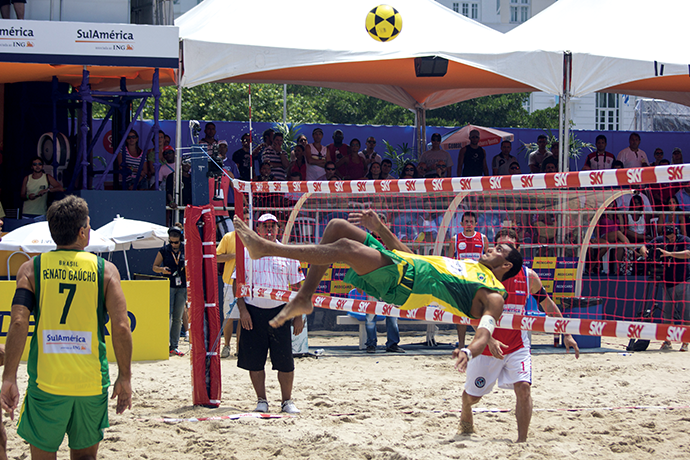 It's a game that combines field rules based on beach 'volley'ball and ball-touch rules taken from 'foot'ball. It is played by four people, with two players on each team, on a court of sand that is divided by a net, just like in beach volleyball. The ball can hit any part of the body except the hands and arms. A maximum of three touches are allowed to get the ball over the net, and each player is not allowed to hit the ball more than once in succession. Points are awarded if 1) the ball touches the ground in the opponents' side of the court, 2) if a team commits a fault and 3) if a team fails to return the ball over the net. Scoring is done using the rally point system (similar to volleyball rules). Match scoring is usually up to the event organiser's discretion, but generally speaking, matches are one set to 18 points or the best of three sets to 15 points (with the third set to 11 points). The court is 9 x 18 m (old beach volleyball) and the height of the net varies and is based on the competition.

Sounds simple and exciting? It is! Although it does take a certain amount of skill to be a footvolley player, it's nothing that a bit of practice can't get right.

So how did this sport come about? History has it that, for a period of time, football was banned in Brazil! Enter Octavio de Moraes, a soccer lover who would not allow his passion for football to be denied, so he started a game called footvolley. He began to use Footvolley as a training exercise for Brazilian soccer players in the mid 1960s. In hindsight, it may very well be that one of the secret ingredients to the Brazilian’s supremacy of the 'beautiful game' lies in the unique blend of control and touch that footvolley develops in the players that play it.

Through the years, footvolley grew in popularity and due to the increasing numbers of players around the world, it became recognised as a formal sport. Not only was it an amazing game to play, it was just as exciting to watch and drew large crowds to the games and tournaments. By the 1980s, footvolley rules and regulations were formally established. Another leap in the historical advancement of footvolley occurred when it became recognised by FIFA as an official sport. Currently, the footvolley community is waiting with baited breath to find out if the application for the sport to be recognised as an Olympic sport for the 2016 Games in Brazil is approved.

Today, footvolley has become so popular that it is played in more than 30 countries around the world by both professionals and amateur players. South Africa is one of those countries and it is amazing to see how fast footvolley is developing and gaining in popularity on our local soccer scene. Ilan Herrmann, who played soccer with a number of top sides in South Africa, introduced the sport and established Footvolley South Africa in 2009. "We have had some really smashing events and the technicians of footvolley are growing our talented local players," he said. Already, successful tournaments such as our Footvolley Fun Day and Footvolley Open Day events have been held in Cape Town, and more recently in Johannesburg at various locations. It has also been covered by radio, newspaper and sporting magazines. Footvolley South Africa's team has also gone into schools to demonstrate the fun and sociable side of the game to the youth. A demonstration took place at Eden College last year, where Grade 8 learners had fun playing and learning about this great sport.

The footvolley network of players is growing rapidly and each event is met with huge excitement and anticipation. At one of the Open Days, we had the pleasure of a soccer celebrity join us, our very own Banyana Banyana’s newly appointed Captain Janine van Wyk. True to form, she and her partner won in the finals that day. Like others who have gotten to grips with footvolley, Janine was also hooked from the get go! Open Day events continue to be held frequently, as it is a fantastic opportunity for everyone to come enjoy and experience this dynamic and fun sport. We are in the process of planning another event of this nature in the upcoming months. 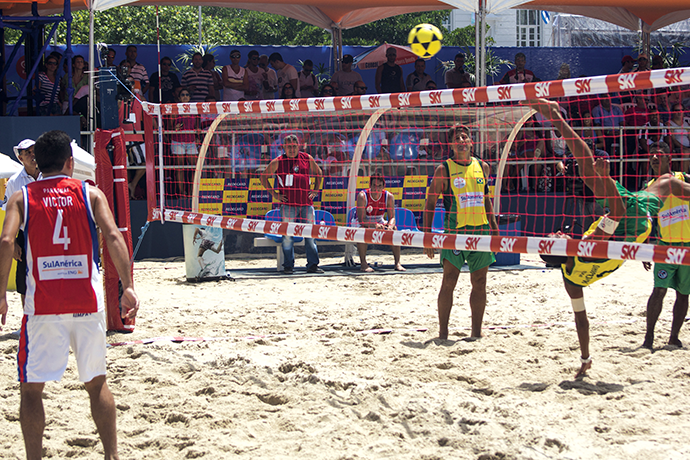 Throughout the year, there are a number of major events taking place in different continents and countries around the world, including South and North America, Europe, Asia, Africa and Australia. The current World Footvolley Champions are none other than the country that invented it - Brazil. The current champions in South Africa are brothers Yoni and Jorge Herrmann. In the last tournament held in Cape Town, on the beaches of Clifton and Camps Bay, they defeated a team of Brazilian nationals in the final to be crowned champions.

So who plays footvolley that you know? Try Messi, Torres, Lampard, Henry, Fabregas Ronaldo, Romario (who is the global ambassador for footvolley) and others. The most recent international celebrity, outside of the football spectrum, is Usain Bolt, who was recently seen having a great time playing footvolley in Rio De Janiero.

As footvolley continues to grow in popularity, major sponsors are also wanting to get a slice of the action and coming on board. These sponsors include Pepsi, Bud light, Emirates NBD (one of the largest banks in the Middle East), Corona and many more. With big-name sponsors such as these getting behind the sport, the future of footvolley is looking incredibly bright.

So who qualifies to play this sport? Actually, whether you are a boy or girl, young or old, experienced or a beginner, you are guaranteed to get a kick out of this thoroughly enjoyable and worthwhile experience. If you are skilful, then so much the better. And if you are still learning the game, it’s a great way to improve your general control and touch in soccer.

Don’t miss the opportunity to be a part of this exciting sport that is taking the world by storm and South Africa along with it! So why not give it a try?

The next tournament will take place in early July and you can see updates and details about it on www.footvolleymania.com. To see more clips on footvolley, search for footvolley on YouTube.