Hunting Trolls and Other Monsters in Europe

I was on a two-month BASE jumping pilgrimage to some of Europe’s big walls, where my travels took me through Switzerland, Italy, and to the literal beginnings of European big wall BASE jumping, Norway. Having visited Switzerland and Italy for BASE before, I had some idea of what to expect, but this would be my first visit to the monstrous walls of Norway. 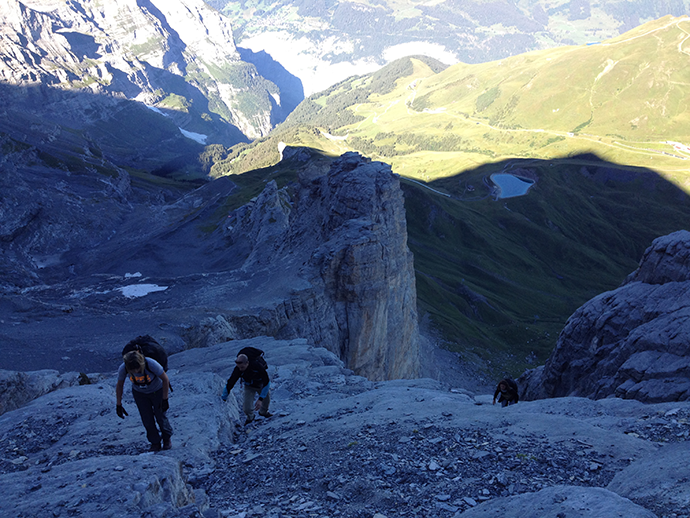 I had been warned of exhausting, technical hikes, and fickle, unpredictable weather, but nothing could truly prepare me for the sheer scale of this land. I arrived to a mysterious country shrouded in fog and an almost perpetual drizzle, aquamarine fjords, and an eerie presence lurking behind the veil of weather. I knew what was there, it was the reason I had come. Giants. Norway’s legendary 1,500 m cliffs or 'walls' as we call them, are some of the highest in the world, and for people like me who make a hobby of parachuting off cliffs and other fixed objects, the Holy Grail. These would be the biggest cliffs I had ever jumped from and, although I didn’t know it as I stepped off my plane at Stavanger Airport, my most challenging BASE jumping adventure to date.

The hikes in Norway vary from two to six hours over rugged and sometimes technical terrain. Because of largely poor weather for BASE jumping, a lot of time is spent trawling weather forecasts in an attempt to guess the most favourable time of day to jump; the elusive 'weather window'. The window might come at 1 a.m. or 8p.m., so with 24 hours of daylight we hiked when the forecast told us to, and slept in-between. Each jump was nothing short of an expedition!

In the first two days I had hiked up and back down twice without a single jump. It was clear these mountains were not going to simply lift their skirts for us, this was BASE jumping boot camp! People often watch me spend 40 minutes meticulously packing my BASE jumping parachute, “All this effort just for one jump?” they ask. Man, you don’t know the half of it. The biggest challenge for me was the uncertainty. As you near the top, or the 'exit' as we call it, you must psychologically deal with the fact that in 10 minutes you could be landed, exhilarated, and warm at the bottom, or face a cold, sketchy four-hour scramble back down in freezing rain and snow.

On one particularly gruelling hike up to a jump called the Katthammer, my buddy laughed as I described feeling like a bug scrambling on all fours over the back of a beastly troll, the mud and moss its mange-ridden fur that peeled off its granite back and into my hands as I struggled to stay rooted on its ever-moving surface. My imagination mirrored my mood, and at that moment the trolls of Norwegian folklore were more of the horror than fantasy version! But then, as I struggled on, smeared in mud like a guerilla fighter, the fog swirled, broke, and revealed them; the giants that had brought me here showed themselves at last and I was simply blown away. These colossal mountains attract BASE jumpers from every corner of the globe and are the very inspiration of the sport itself.

This is what BASE jumping is all about, from the intimate folding of your life-preserving parachute and the physicality of the hike, to the intense mental challenge of the potentially mind-blurring freefall. It is nothing for one jump, it is a complete experience.

We reached the top of the beastly Katthammer physically fatigued but exhilarated. With the constant pressure of potentially missing the weather window in the back of our minds, it was an adrenalin rush from the first step of the steep three-hour hike to the exit. At the top, there was little time to contemplate the powerful scenery around us, for that tricky weather window was closing fast! We kitted up, slapped a hasty high five, and left the rock sopping wet, covered in mud, and with fingers frozen. And then all at once I was in freefall, a LOT of freefall.

One thousand two hundred metres of intense and eye-watering speed, as the magnificent terrain roars past for 35 seconds of powerful, epic, human flight. The jumps are technical here, requiring a precise flight path to avoid terrain. The scenery in Norway, as giant and monstrous as it is, creates majestic visuals in freefall, the experience somehow amplified by the sheer enormity of the place and everything in it. This place is built for viewing at high speed! Living, breathing, roaring speed! I am an aircraft with a thousand intricate moving parts, the most advanced on the planet, and I am exactly where I want to be!

I had travelled to Italy to jump from the mighty 1,200 m Mt. Brento, and in Norway I flew a wingsuit past the Trollstigen or 'Trolls Ladder', the famous winding alpine road. But one monster continued to elude us, the infamous Troll Wall of Norway; a colossal formation of spires sporting a 1,700 m drop from exit to landing. The wall gets its name from the Norwegian legend that trolls attended a wedding one night, stayed too late partying and on their way home were caught by the sunrise and turned to stone. It is also one of the birthplaces of modern-day BASE jumping, made famous by Carl Boenish, the Father of our sport.

We spent many days in Norway weather watching in hope of claiming this giant, many times waking at 1 a.m. only to find the weather was poor and having to abandon our expedition. On my final day in Norway, we decided to take our chances with the weather. We got an 'alpine start' at 1 a.m. and in the shifting fog and wind I felt like Frodo on the last push to Mordor. At one stage, as I clung to a sketchy ice ledge, my buddy, an experienced mountaineer, asked me if I had any ice climbing experience as this type of terrain usually warrants ice axes and crampons. As I clung bare fingered in my skate shoes, I replied that I had little climbing experience of any sort. So instead of offering his usual technical tips, he raised his eyebrows and feigned nonchalance with, “Okay then. Don’t fall off.”

At the top of the troll it was clear that we would not be jumping that day. The wind howled to the point where it was impossible even to stand upright at the precipice, so we had to settle for crawling to the edge and peering over at our would-be prize. The word 'exit' that was painted on the rock back in the '80s by Carl Boenish himself, could still be seen. It felt like a prize just to be there, and though it was hard to turn and start the four-hour hike back down, it was not without a certain sense of accomplishment; not just for being where all the craziness that is BASE started, but for feeling like, in the process of this journey, I had gained a new level of understanding into the 'why' of my sport.

In stark contrast to my experience in Norway, Switzerland offered relatively easy hikes and temperate weather. I jumped in an area close to Interlaken, affectionately known to BASE jumpers as 'the valley'. It is BASE jumping Disneyland, with the train and cable car infrastructure in place for the winter ski season effectively halving our hiking times. Here one can jump up to 10 times a day compared with Norway’s epic, single jump expeditions.

On previous trips to Switzerland, weather had hindered my attempts to claim one famous BASE jumping prize; the North Face of the Eiger, an exit known to BASE jumpers as 'The Mushroom'. This year I intended to change that. The Mushroom is one of those deliciously sating 'complete experience' jumps, involving an alpine train ride, an exposed three-hour scramble, a bit of rope work, and some makeshift climbing. The Mushroom itself is separated from the main face of the Eiger by a two-metre gap that's connected by a wire cable bolted across. With climbing slings looped through our parachute harnesses and a karabiner attached, we clipped onto the cable and effectively zip-lined over the 1,000 metre drop below. The Eiger is infamous for her unpredictable weather and, as if to prove that nothing comes cheap in this sport, despite favourable weather forecasts, my party arrived atop of The Mushroom to thick cloud cover, and a no go for BASE jumping. We waited for hours in hope, but finally had to accept defeat and started the long and treacherous scramble back down. The following day, a little stiff and tired but in high spirits from the epic views and adrenalin-filled hike the day before, we attacked the Eiger again. Despite an identical weather forecast the sky could not have looked more different and the scene was welcoming as we arrived atop our prize. Standing on such a unique rock feature, exposed and alien, is an empowering experience. And watching it shrink behind you as you accelerate to 140 km/h of freefall, even more so.

During this trip I learnt many things; I learnt to appreciate beauty in the rain, to accept a helping hand when offered, and the satisfying feeling of conquering something, both together and alone. Of pushing oneself to the edge of one’s physical and mental capabilities amongst the most exquisite, wild, and rich elements of our planet. But most of all, I learnt to appreciate every moment for what it is right now, and not what I hope it will become.

So although I left this land with certain monsters left unconquered, these are monsters I will happily return to hunt again and again. For that is what it’s really all about.