Singapore is a city of lights, shopping, islands, crab, Tiger beer, durian and home to the world’s largest indoor skydiving wind tunnel. Spanning 16.5 feet wide and 56.5 feet high, the Singapore tunnel overlooks the South China Sea from the amazing Siloso Beach on Sentosa Island, and is filled with activities to keep one occupied when not flying in the tunnel. 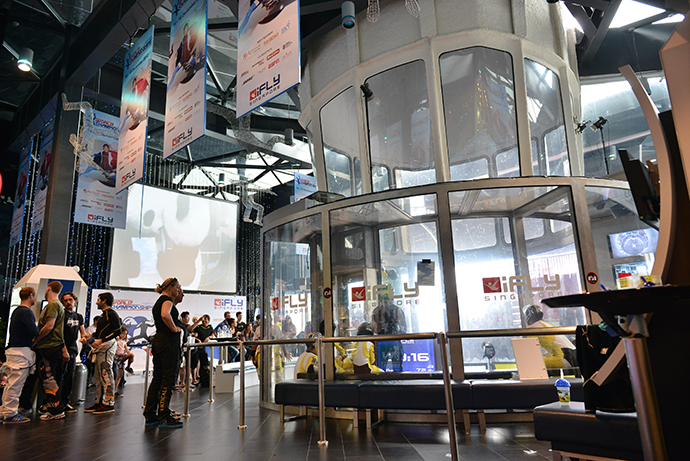 So when iFly Singapore announced plans to host the Indoor Skydiving World Championships from 13 to 16 December 2012 we simply had to go. The 'we' being SAVOLO, a South African 4-way Formation Skydiving team consisting of Amy Kirtland, Bailey Edmunds, Dirk Venter and myself, with Warren Hitchcock as our cameraman. Since Amy couldn’t attend, we roped Andre van Heerden in as her substitute, and we wouldn't need Warren’s services in the tunnel.

We arrived in Singapore a few days early for some training. Training is pretty much a four-letter word in our team and despite our best intentions we have yet to do much of it at all. We had 2.5 hours of tunnel time booked that would hopefully be enough to find our groove before the competition. With one new member and no jumps together since the SA Nationals, more than seven months earlier, we needed it. To put it in perspective, 2.5hours equates to about 200 skydives worth of freefall time. Should be enough.

There were a number of events taking place at this competition, including the 4-Way Formation Skydiving (Open and Amateur), 4-Way Vertical Formation Skydiving, 2-Way Freefly and Neo Freestyle Open and Kids. SAVOLO was competing in the 4-way Formation Skydiving Open event against seven other teams. The recent world champions from the USA were competing along with another top USA team, the Canadian and Australian national teams, the French B team and two military teams from Singapore. Overall it was a very strong field, but we were optimistic and ready for the meet to get underway.

The team congregated at the tunnel on the first training day to discuss strategy, technique, slots, continuity and all the other aspects that go into our preparation. Established teams usually have this all dialled in already and only need to talk about the finer details. Since SAVOLO was still fairly new and we were using a substitute, we had to start fresh. The plan was to use the first training day to go through all the random and block formations, to see if any required further training and work out the kinks. Thereafter, we would fly some competition draws as test runs prior to the competition, all at top speed since it is a timed event. Solid plan, right? Had Amy been there with her much-needed voice of reason we may have taken a more subtle approach.

We started training session one with some fast sequences that were pretty easy. We rotated with one other team, which meant we would fly for 90 seconds (a 'rotation'), then jump out to rest while the other team flies for 90 seconds, repeating this cycle for 30 minutes and 10 sessions in total. We came out of the first session out of breath, out of energy and hurting. I guess it serves us right for doing the skydiving equivalent of 100-metre sprints for the entire 15 minutes we flew! With the fast sequences done, we moved onto the slower, more complex sequences that wouldn't require as much energy. Our second training session went much better, although we were suffering the consequences of our earlier training. We completed day one having made little performance progress and decided to go back to the drawing board for day two. We reshuffled the slots (who flies where in the formations) and decided to reprioritise certain aspects of our training. Day two was going to be awesome!

Day two wasn’t awesome. We battled through our training in the same manner as day one, taking three steps forward and two back. We struggled with fatigue, focus, technique, frustration and anger, all of which adversely affected each training session. The thing about skydiving that makes you successful is often the subtleties and not the major components. Naturally, you need to be able to fly well individually. We had that handled ok. But then you must be able to fly well together. That’s the difficult part. Communication, synchronicity, trust and familiarity are what separate average teams from good teams, and good teams from great teams.

For instance, at the end of this competition, SAVOLO ended up completing a formation every 1.9 seconds. On our two fastest rounds, we completed a new formation every 1.5seconds. The current world champions from the USA completed a formation every 0.8seconds on their fastest round and completed a new formation every 1.1 seconds over the full competition. This includes formations where the individual flyers have to complete 540-degree turns or two groups of two flyers joined together need to rotate 360 or 540 degrees. These longer formations require considerably more time to execute, which means the faster formations are built in well under a second each. That means that all four flyers must release their grips on each other, execute a move and take grips on another flyer in the new configuration and then repeat, all in under a second! The synchronicity required for this can only be achieved if all four members are acutely aware of what the others are doing, which takes constant communication via rehearsed sequencing, eye contact and body language. Naturally the more time you spend with the same team, the easier it becomes to feel the rhythm and know when formations are good to go or when they need some time to settle. It’s a precise sport and requires disciplined training that takes an immense amount of patience. Sometimes patience that is hard to come by, especially for me. For this reason it's rare that teams train without a dedicated coach to control the training plan and decide what needs to be worked on, when.

By day three of training we had decided to dial it back a notch and take things easier. The result was somewhat satisfactory and we felt in reasonable shape for the competition the following day. Well we kept telling ourselves that. Repeat it enough times and it may just come true.

An indoor skydiving competition is run much the same way as an outdoor competition, with a few exceptions. Instead of having a camera flyer jump with us to capture the jump for the judges to review, a fixed camera is placed at the top of the wind tunnel. The aircraft exit is replaced with an entry or start procedure - in this case a standing start from the net. Finally, while you may share the airplane ride with opponents, you seldom see their round before you jump. With an indoor meet you see them fly (and they can watch you), which adds a different dynamic to the competition mindset.

We entered round one with optimism; it would come together and we’d find our groove and fly together the way we knew we could. Alas, it was not to be. Round one was fairly complex and we gained four penalties for incorrect or incomplete formations and some related confusion, for a score of 15 points. The Australians scored 16 and the Singaporean teams 19 each. The professional teams (USA, Canada and France) took an immediate and significant lead, as expected. With 90minutes to prepare between rounds, there was not much time to dwell on round one. For the most part our performance was lacklustre. We picked up more penalties, battled through some ‘B slot’ blocks and generally endured the typical outcomes associated with new teams and little training. These factors had not affected our elevated performance expectations, so we were left fairly disappointed after each round and downright despondent by the end of day one. We had to regroup and pull it together for day two.

Day two started out comparatively well with some bumps, but no catastrophes at least. Round seven felt pretty good as we finally found a rhythm and gathered momentum, if a little late in the competition. Only the leading four teams proceed past round eight to the semi finals, and the two USA teams and Canadians occupied the top three positions, with Australia and France tied in fourth, followed by the Singapore teams and then us. The competition was over for us and we were relegated to the spectators’ bench for the remainder of the event. The rest of the competition was amazing to watch, with USA’s Arizona Airspeed taking first place to become the new world champions.

Looking back we all agree that we did ok. We grew as a team and learned a lot. Seeing the world’s best teams in action was inspiring and fuelled us to train harder (and smarter) for the next competition. For all of us involved, the trip was a memorable experience and contained both a number of valuable training lessons, as well as great memories. We are entering new territory in our skydiving careers and South African skydiving no longer feels ok with being middle of the pack (or last in this case). Our expectations have increased, and with it the pressure to learn and improve faster. It’s also easy for us to feel optimistic about the future. At a difficult meet we still scored our highest average score to date. Our scoring is increasing consistently, even though our expectations seem to be increasing at a slightly faster rate. Our team competed together for the first time in April last year and only has 78 team jumps and about 12 hours in the tunnel, so as far as training history goes we are brand new. Add a few hundred team jumps and some more tunnel hours and I hope to be typing a different article.

Four team members fly in a horizontal body position. They are given a set sequence to perform in each round, which they must complete accurately as many times as possible within 35 seconds.

4-Way Vertical Formation Skydiving Four team members fly in a vertical position (either head up or head down).

They are given a set sequence to perform in each round, which they must complete accurately as many times as possible within 35 seconds.

Two team members fly in any position, each performing their own choreographed routines of 45 seconds each. The routines are judged on technical difficulty and presentation. Additional rounds of speed routines, similar to Vertical Formation Skydiving rounds, are also thrown into the mix.

This is an individual event where each flyer flies in any position and choreographs their own 45 second routines. The routines are judged on technical difficulty and presentation. This event also included a category specifically for kids

A vertical wind tunnel is usually a large, funnel-shaped building with one or more fans at the top to draw air upwards through it. The air drawn through is either directed out or continuously re-circulated around to the bottom to be drawn up again. Drawing the air in from the top (as opposed to blowing from the bottom) creates a smoother, consistent airflow that is almost identical to freefall. The flying chamber is often in the middle of the structure, with a doorway to enter or exit the airflow. The controlled air speed can be set to the precise speed that is comfortable for the type of flying the participants are doing. Skydiving wind tunnels range in size from 10 feet in diameter to over 16 feet. For a team of four flyers, the larger the better, so we usually visit 14 feet and 16 feet tunnels to train in.

For more info on how it works, take a look at the Wind Tunnel section on www.iflysingapore.com