Back when Sony handycams were all the rage for aerial sports photography, I remember a skydiver looking at the rudimentary first generation GoPro gimmicks and speculating that they would never really take off. This was because he believed that these tiny things could never achieve the video quality we were achieving then with an awkward handycam teetering from our specially-designed camera helmets. 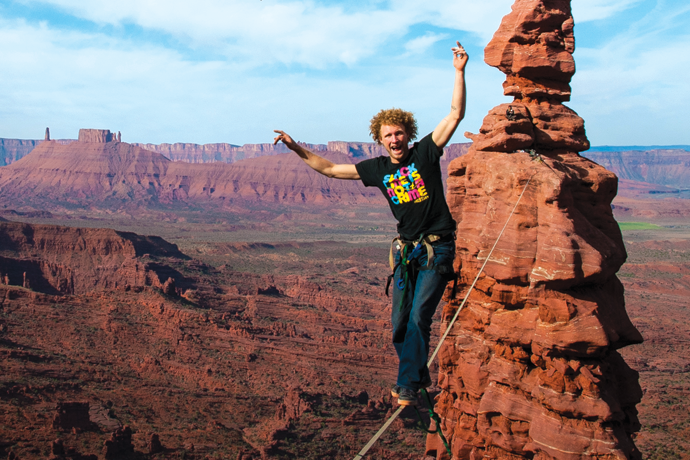 These days, it’s becoming more and more apparent that video logging, or 'vlogging', is more than a means of documenting one’s self to the public. This is the modern day arena. A playing field where funding for air tickets is no longer the prerequisite to compete on an international level. The new tickets are an internet connection and some savvy about iMovie.

Modern communication has turned people like Sungha Jung, who would otherwise be another unknown Asian guitar protégé, into an international sensation. It has turned BASE jumpers like Felix Baumgartner into astronauts. It has reformed the way we communicate, and sports are no exception.

Andy Lewis, a 26-year-old slacklining star reiterates, "Now you can post a video of a new trick on YouTube and two weeks later, it’s being done worldwide." It makes the evolution of the sport go faster. Slacklining, which resembles tight-rope walking, is done on a webbing line with more 'slack', hence the name. It has been around for generations, but only recently came into the public eye through numerous eye-catching clips on YouTube. It started in Yosemite National Park, in the USA, amongst climbing circles and has evolved into a multi-disciplined sport that tests both the physical aspect of the athlete in tricklining, and the mental in the death-defying highlines. Well known slackliner Andy recently appeared on USA television, in a Super Bowl performance with Madonna, bouncing on a trickline in front of thousands of viewers. This is a true example of the modern blending of the sporting and entertainment industries.

As a BASE jumper, I have witnessed, first-hand, the effect vlogging has had on lesser-known sports. Viral clips, such as People are Awesome and Amazing People, have the world considering the merits in sports that were previously regarded as dangerous stunts. BASE jumpers have been transformed from criminalistic bandits to inspirational figures, all thanks to home-edited shorts posted online. Various obscure sports like parkour, or freerunning, have arisen and they all have us asking the same question, "Where do these people come from?"

Andrew Kirkpatrick, a 29-year-old film-maker from Bermuda, started like any other; making home videos of their crazy shenanigans at university. At the suggestion of a friend, Andrew attended film school in New York, but it was his Falling off the Rock videos on YouTube that opened doors into other aspects of the film-making industry. These days Andrew makes his living as a freelance shooter/editor, owns his own branch-out company, Burnt House Productions, and makes music videos, commercials, ads and documentaries. "The cliff jumping projects started out as a couple of friends with a camera and a tub of sunblock," says Andrew. "As the videos became more popular, more people wanted to get involved and help us out."

In their latest video, Girls Jumping off Cliffs in Bermuda, which at the time of writing had just passed 60,229 hits on YouTube, Andrew and Evan Faulkenberry, his partner in the Falling off the Rock series, contacted a gymnastics coach in the USA to recruit their athletes. “We had two companies sponsor the flight costs of female gymnasts, which was huge. Every (additional) penny we receive goes into making the next video bigger and better.

Two years ago, whilst searching for ways to make Falling off the Rock even better, the boys spotted Mike Wilson. “Evan saw a video of Mike doing his quadruple backflip rope swing on YouTube,” says Andrew, “and we had to give this guy a shout.” Two weeks later, Mike was Bermuda bound.

A quick YouTube search of 'Mike Wilson' will illustrate that this guy is a dynamo at anything aerial and is regularly featured in People are Awesome style clips. Mike originally got noticed by YouTube after one particularly spectacular skiing crash video went viral, and despite his association with the boys at Falling off the Rock, Mike has become a film-maker in his own right.

I first met Mike personally in the Tahoe area whilst on a BASE trip in 2012. Our meeting was funny because we were both on crutches at the time, and Mike had recently chopped off the tips of two fingers and had them surgically reattached after a ('successful' according to him) stunt from a microlight aircraft! The line between a People are Awesome video and an 'ultimate fail' video can be a fine one and since becoming involved in the international community of extreme sports, I have certainly started to notice the growing number of people I know in both!

"Last summer was our worst year for serious injuries, with six broken ribs, a back fracture and a ruptured sinus cavity. In years' past, we have had pinched nerves, bloody noses, a concussion, a few enemas and several good wedgies," recalled Andrew.

This goes to illustrate that although anyone can yield a GoPro, the stunts in these videos are as real as they come. What many people do not realise is that it takes years of training and high-level athletes to produce just one awesome video moment.

Mike has been a professional athlete all his life. "I got sponsored for skiing when I was 11. My specialty in skiing is big air and I’ve always had really good air awareness. I enjoy cliff diving, BASE jumping and most other sports that put me into the air with the ability to flip and spin."

"I’ve always been into cliff diving," says Mike. "I really got into it when I was 10 or 12 and because I was so much better in the air (from skiing) I could do a lot of tricks. Later, I ended up building a few rope swings in the Tahoe area and Evan and Andrew saw some videos from that and flew me to their cliff diving shoot in Bermuda. So, that’s how I linked it in professionally. Now people email me their videos all the time asking for my opinion or advice, so I guess I’ve kinda set the bar, but by no means am I the only one doing it!" he said.

Aside from Red Bull cliff diving, which, with its comparatively safe overhanging, man-made platforms, bears little resemblance to the antics in these cliff jumping videos, there is no formal forum for cliff jumping. Yet, these guys are clearing underhung, solid, natural objects and throwing in complex aerials to boot. The talent on display is undeniable. "Since these videos have come out, we have connected with several other 'underground' cliff jumping YouTubers," says Andrew. "So you never know what could take shape in these coming years."

The 2013 Winter X Games saw online videos become accepted as a formal forum for the Real Snow event. Participants were offered a shot at a coveted X Games medal by submitting video clips of their trick sequences. They were judged entirely online by a panel of experts, as well as the voting public. Modern forums like this now have sportsmen rethinking their support teams and skill repertoires, with an eye for the artistic and some editing know-how now becoming a factor.

As sports have always maintained an origin in entertainment, it is perhaps fitting that it has now come full circle to a point where today’s gladiators fight not in the sands of the Colosseum, but on the interactive domain of the World Wide Web.