After attending the 2012 Spring Fling Festival in Perris Valley, California, I remember thinking that that was the most complex formation I had ever built and the best event I had ever attended. 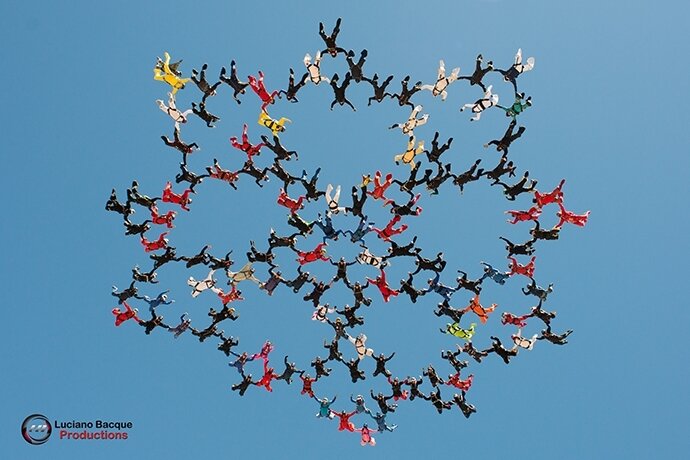 My buddy, Marius Vrey, and I recently returned from the 2013 Spring Fling Festival Invitational in Perris and, don’t ask me how they did it, but this was even better!

Last year’s formation, the Perris Wheel, was a 151-way. We had to build a wheel in free-fall with 151 skydivers, and although at the start it seemed impossible, we actually managed to complete it. And what a beautiful formation it turned out to be!

This year, it was a tad smaller – ‘only’ 125 skydivers. Although the number might make it sound easier, don’t be fooled. These guys managed to dig up an even more difficult and complex formation, which they named the Perris Flower - and it was as beautiful as it was complicated. From the word go, every single skydiver, when laying this formation out on the ground, HAD to line up on his/her exact angle. If one body close to the *base was off-centre by 10 centimetres, it could potentially shift the outside flyers off-centre by a metre or more. No pressure :) But I’m getting ahead of myself, so let me start at the beginning.

After a warm welcome from the *P3 organising team, we were instructed to check the notice board, where we were all already allocated into our respective slots. To begin, we were to build three separate formations. A 25-way (the base) and two bigger formations, a 40-way and 60-way, kicked off separately, and were introduced to jumpers under the sharp eyes of the appointed team captains and organisers. The calm, patient, and professional approach of these guys was nothing short of remarkable. I had the opportunity to start in the 60-way formation and my good mate, fellow South African Marius Vrey, was placed in the 25-way base. We did five skydives that day and in the day’s debrief, we were informed that we would attempt the full 125-way the very next morning!

We started to put this masterpiece together and by the end of the day we realised that it was not as ‘easy’ as we had hoped. Closing the formation was proving difficult, due to incorrectly lined up angles that were preventing the lines on the outside from closing off.

Friday, our third day there, started out with bad weather blowing in, giving us much-needed time for some urgent groundwork. After careful engineering and adjustments by Dan Brodsky-Chenfeld , Kate Cooper, and the rest of the talented P3 squad, the bigger picture finally began falling into place. We were actually going to build this thing! We made one 125-way attempt as things really started coming together!

Saturday morning kicked off bright and early, getting four jumps in. With the event dinner that evening, the beer would taste so much sweeter if we could celebrate a completion - we REALLY wanted to achieve this by end of day. By beer-o’clock, however, although the pictures were starting to look good, it was still not completed.

Sunday morning, and the final day of the event, got us up and ready even earlier (no sleep, perhaps?) and on jump two, we nailed it! The flower bloomed over Perris and the dream became reality. 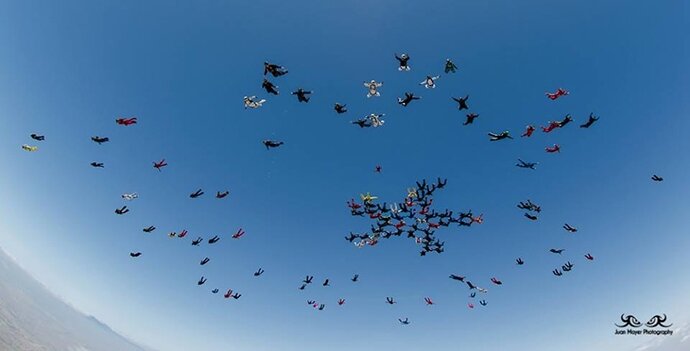 Our elated high-fives were short-lived when Dan BC interrupted us with the news that this 125-piece flower was to continue on to a second point! Three inner circles would require everyone to break grips from the flower and fly to their new positions. With no shortcut of dropping only some grips and picking up a few others to form a different picture, we’d need nothing less than our A-game to pull this off.

While with each attempt to build that second point saw a quicker build to the first point, even making it seem easy by attempt two, we never quite completed the second point. We were so close that given two more jumps, I think we’d have completed a two-point, 125-way skydive. Indescribable.

This November, we’ll attend yet another breathtaking P3 event, this time in Arizona, with a goal of setting a series of sequential world records on various sized formations, including a 200- or bigger-way. Multiple-point big-ways is a new FAI record category, so it is an exciting time as the sport explores a new dimension on the traditional ‘biggest formation’ record, that of ‘more formations’.

Big-way Formation Skydiving is indeed big, way beyond your wildest imagination. You can neither understand it nor explain it in words; you simply have to experience it.

Dan Brodsky-Chenfeld is the six-time World Champion Formation Skydiver and author of Above All Else - http://danbrodsky-chenfeld.com/

*Base - The centre, or smaller core formation built first and around which the large formation is constructed.
*P3 - organises big way formation skydiving events, such as the Perris Spring Fling. http://www.p3skydiving.com/