I just can’t wait to be king

For a true African wildlife experience there are only a few destinations to rival Botswana’s Central Kalahari Game Reserve. As the world's second largest game reserve, the 52,800 km² Central Kalahari is bigger than Denmark or Switzerland and home to a large diversity of animals and landscapes. 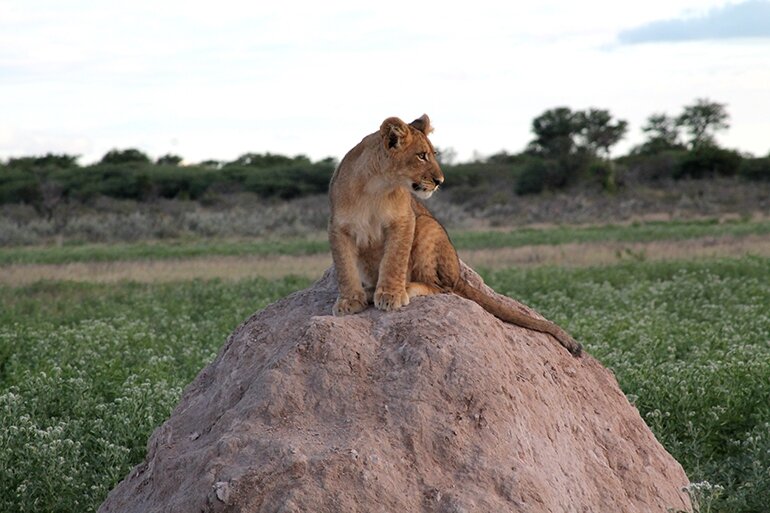 Understandably known as a famous safari destination, the park is also home to the Basarwa or San people. These tribes have been living in the area for thousands of years, and were originally hunter-gatherers. Over time, however, their lifestyle has gradually changed and, as the area developed, they began living in settlements within the Central Kalahari Game Reserve.

Xen and I have been blessed to visit this veritable wild wonderland that is rich in fauna, flora and culture a number of times, so it was with much excitement when we returned earlier this year. Leaving on a Friday morning for a three-week-long adventure, we set out for Grobler's Bridge Border Post, via Mogwase, close to the Pilanesburg. However, recent heavy rains in the area made this crossing impossible, so we continued to Stockpoort Border Post, via Thabazimbi and Lephalale.

We passed through the Stockpoort Border Post and into Botswana without any hassles, and travelled on a dirt road for about 78 km before turning onto the A1 North to Mahalapye. Passing Mahalapye, it was dark by the time we reached Palapye, a large town in Botswana situated about halfway between Francistown and Gaborone. Searching on our GPS for some accommodation in the area, we came across Camp Itumela, which sounded like a good place to stay. As we meandered through the township and industrial area, we were quite skeptical about what to expect. Great was our surprise when we arrived at the campsite and were warmly welcomed by the friendly staff. After checking in, we indulged in a delicious buffet dinner and then relaxed at the bar, while quietly watching the goings on of all the interesting guests.

After a goodnight’s rest under a mosquito net that was just too small for the bed, we set off once more for the Central Kalahari Game Reserve. At Mopipi, one of the oldest villages in the Boteti region and seldom visited, we decided to drive past Lake Xau, expecting to see lots of water after the wet, rainy season. We were very disappointed because we couldn’t see any water at all. However, what made the detour worthwhile was all the Cape vultures feasting on a horse's carcass. The interesting part was that they didn’t tear the skin, but rather put their heads into the open wounds and fought like hell, with their heads in the carcass, for their piece of meat.

The village of Rakops again didn’t have petrol, so it was fortuitous that we had filled up at Mopipi (as we always do). While travelling from Matswere Gate to Kori 3 Campsite, where we were going to camp, the sky darkened with swollen clouds and we waited for the downpour that would turn the road into a river. To our amazement, even though the road was bone dry, the surrounding veld was green, lush, and overgrown. As a result, it was impossible to see any animals, as it was just too dense and overgrown. In fact, it looked more like a tropical forest than a semi-desert area.

Arriving at Deception Pan, we noticed that the springbuck had dark brown faces, and figured that this odd colouring must be due to the wet pan. After unpacking, we had an amazing outdoor shower and then settled down next to the fire. As we listened to all the wonderful night sounds and heard the lions roar not too far from us, soft rain began to fall.

The next morning, the temperature fell to 14 degrees Celsius, so we took shelter under our awning and did something we never do; we spent most of the day reading, which was tremendously relaxing. Throughout the day we saw a number of animals at the pan, as well as two huge Kalahari lion males. The rain continued unabated into the night, but by morning my prayer that it stops raining long enough so we could pack up was answered.

Under a grey, cloudy sky, we hit the road once more and decided to travel through the Passarge valley to Motopi, our next campsite. The road was beyond wet and sometimes we could only see 'rivers', with no road in sight. We know from experience that you do not leave the roads in the Kalahari, especially around the pans in the rainy season. However, halfway through the valley we came upon two vehicles that were stuck and they indicated that we should avoid the road as it was flooded. So we ventured off the road and it was not long before our vehicle had sunk down to its chassis and we too were stuck. The soil was drenched, the pan was soft and there was no place to park our 3-ton Nissan Patrol, so we ended up having to winch ourselves out.

Once back on solid ground we made another mistake; helping the people that were stuck by trying to get close to them rather than using the winch, with additional tow ropes, from a distance. It took us about three hours to get ourselves (a few times) and our fellow travellers out of trouble. 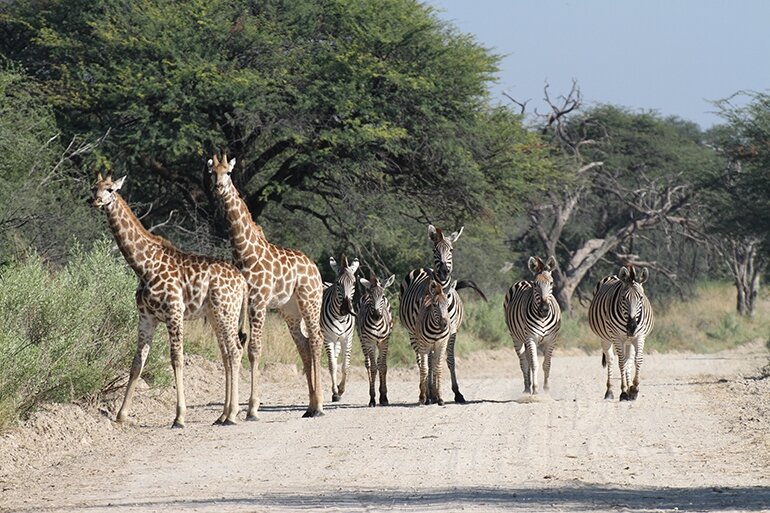 Passarge valley has never disappointed us when it comes to seeing a wide variety of animals that, in the past, included kori bustards, bat ear foxes, gemsbuck, springbuck, and many more. Great was our surprise when on the road to Motopi we saw four honey badgers, a green spotted grass snake, and, best of all, two small lions sitting on an ant hole in the middle of a pan. We stopped to watch the inquisitive and playful lions, but when we started to take photos they ran across the road to their very relaxed mother and continued to play.

We travelled for about 50 m and arrived at a waterhole, where we found a group of about eight Capetonian travellers sitting outside their vehicles and sipping champagne, while they waited for the animals to come to the waterhole. I have never seen people pack up so quickly when we told them about the lions around the corner.

We stayed at Mopopi 1, where our campsite was positioned on a hill that overlooked the valley. It was exquisite and later, the full moon in a clear sky all added to another incredible experience.

The following morning we woke up to a beautiful, sunshine-filled day, the first one on our trip. During the night we'd heard lions roar, so I couldn’t wait to have our coffee at the Motopi waterhole, about 3 km from our campsite. When we reached the waterhole, we saw a lioness with her two cubs playing around her. A bit later we saw another lion behind the bush, so we decided to follow the road to get a better view of what was behind the bush. To our delight, we saw the biggest male lion, with the most glorious mane (something you only see in story books), feasting on a fresh kill. He was joined by another lioness and three cubs. The next moment, one inquisitive cub came around the bush and stood in front of our car, watching us. It then lay down, with a challenging yet playful look. I started singing the song from The Lion King, "I can’t wait to be king” because at that moment, as it lifted its one eyebrow, it looked as if it really was ready to be a king. After a few moments it got up and walked to the back of the bush and then, as if on a stage, all five cubs from the two litters appeared and posed, like they knew we needed some good photos.

All the way to Tsau Gate I couldn’t stop talking about the experience and we both agreed that it was an excellent way to end our trip in the Central Kalahari Game Reserve. •

• Best time to visit: It's a good time to visit all year round. During the rainy season the grass is lush and the wildlife concentrates in the ancient river beds. The birdlife is also spectacular at this time of the year. The dry winter months have its own attractions, although the wildlife may be spread out due to a lack of water.
• Accommodation: A number of lodges have been set up in the reserve and surrounding properties. Advance bookings are required for the camping sites - email:
• Currency: Make sure you have sufficient local currency with you, plus a bit extra, as there are no auto banks in the desert or exchange booths.
• Water: Bring enough water for drinking, showers and washing dishes.
• GPS/map: Bring a GPS and back-up map, in case you encounter any trouble with your GPS.
• Petrol: Top up all your fuel cans at a town closest to your destination and, if possible, carry the cans outside your vehicle, such as on a roof rack.
• Driving conditions: The roads are rough and the sand thick. When it rains, there are treacherous muddy patches. Beware of the thorns on the road and deep dongas, often filled with water or mud. You can easily drive 100 km per day at an average of 30 km/h.
• Vehicles: Ensure your vehicle is serviced, the wheels aligned and spare tyres are pumped. Check your car’s tool kit and include items like an inflatable jack and fitted winch.
• Rules: Find out about current rules, like if you can sit on the roof or walk around outside your vehicle (which should always be done with caution).

The name 'Deception' comes from the dry surface of salt pans, which sometimes convincingly appear to be full of water, until one gets right to the edges. Deception valley is all that remains of a sprawling riverbed that has long since dried up, and is now covered with short grass and the occasional island of bushy trees. 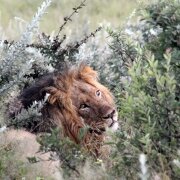 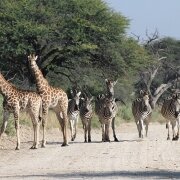 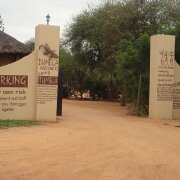 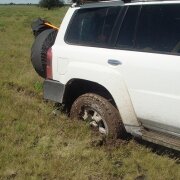 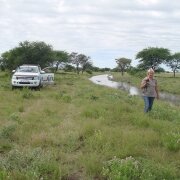 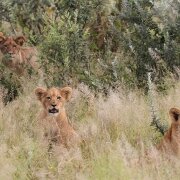 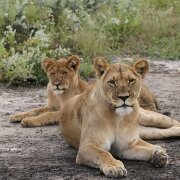 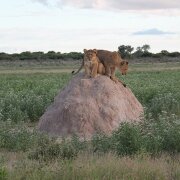 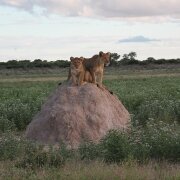 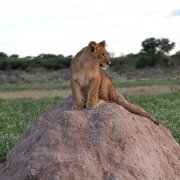 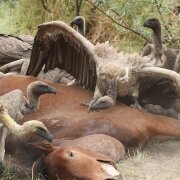 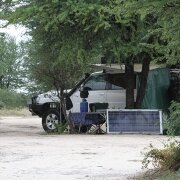 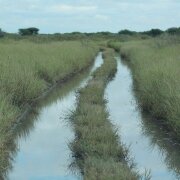