The 32-Mile Molokai-2-Oahu Event was the hardest race I have done this year. 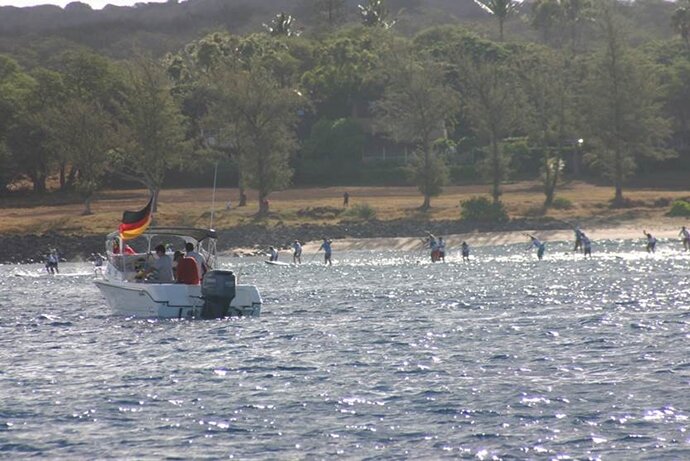 My family and I went from Maui to Molokai on Friday on our boat. We brought my boards, our food, water, clothes, provisions, and Igloo coolers. It was great to get there a couple days early to relax.

On Saturday Zane Schweitzer and I got a good paddle in. We also got our boards ready with OnIt Pro. Then the rest of the day was rest and lots of eating!

My dad and I did lots of research on which line was favored weeks before the race. Since there was an outgoing tide everyone normally goes southbound. The current pushes you north - so you want to head more south so that you aren't trying to paddle against the current once you get to Oahu. Also - the wind predictions were really good. East winds at 20 mph. So - before the race I had a good idea of what line to take to Oahu.

So after the Hawaiian Pule on the beach, I headed to the starting line. While I was on the starting line I looked at Oahu and made a land mark to head to. Once the horn blew Kai Lenny and I instantly pulled ahead, with Danny Ching heading a little north of us. Kai and I both took a very south line which worked for most of the entire race.

The wind was very light easterlies around 8-10 mph. And the swells were coming from all different directions. Which made catching bumps tricky. The conditions were challenging to say the least.

Kai and I were trading off the lead the entire race. The committee boats and the helicopters were constantly around us - giving us a good idea that we were in the lead.

It was a hard grueling battle but as we got closer Kai made a good comfortable lead on me. At this point I was so tired and hurting I thought Kai would keep his lead and there was no chance of me catching up. But, my support team aka my family - saw that I was giving up and were screaming "Never give up, anything can happen, keep going". And somehow I flipped a switch and got my energy back and paddled my hardest. It took me a bit, but I finally caught back up to Kai, which amazed me and I just kept my head down, paddling hard and started making a decent gap on him.

At this point our line to Portlock was perfect - but with around 8 miles to go the wind switched to the North and came up to about 12-15 mph and now I was paddling into the current and the wind.

At this time Travis Grant and Scott Gamble, who both took a more north line reaped the benefit - as the wind played in their favor. They now had the stronger wind at their backs - and all the guys that took the south route were paying dearly for the wind shift!

As I got close to Portlock, I noticed someone on a SUP in front. Then I was told Travis was almost finished. I was a little bummed, but I wanted to see if I could catch Scott. So I paddled close to the wall and caught a bomb wave that connected to another little wave that connected me to a small inside wave. I pretty much caught all the way up to Scott but he was not going to let me pass him. I ended up coming in third overall - but was still stoked I did that good considering I paddled an extra 4 miles because of the wind switching.

Thanks also to my support team - my dad, mom and sister!! They are the best! Also great job passing me all my Hammer Nutrition and my second DaKine Hydration Pack!

Also a big Mahalo to all the event organizers and volunteers. They always do a fantastic job!