The Dakar saw a navigation heavy stage which passed through many kinds of terrain and put the rider’s skill at using the roadbook to the test. The stage ended in spectacular style when the race –after some 40 km of dunes- finished with the picturesque steep descent into Iquique, from where the Pacific Ocean can be seen. 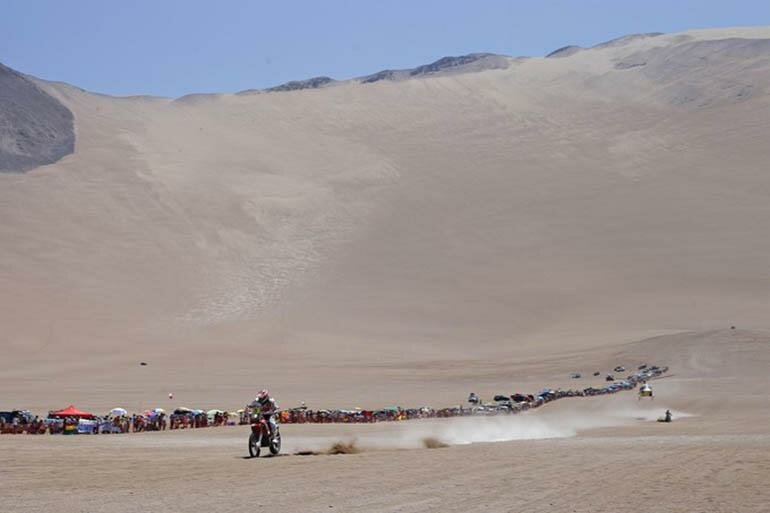 TEAM HRC rider Joan Barreda set off early with a 06:47 start this morning, beginning the special some 422 km later. Sixty kilometres into the race he had caught up with Cyril Despres and once again, he made a solitary ride upfront opening the way for more than 350 km. The Spaniard really put the CRF450 RALLY through its paces finishing in second place.

Hélder Rodrigues attacked hard again today in order to try and cut down the deficit with his immediate rivals in the fight for a podium place. His seventh place finish helps better his overall position. The Portuguese rider now lies in sixth in the general standings.

Argentine Javier Pizzolito, who yesterday finished the second part of the marathon stage in the first twenty, continued to make progress today with a fourthteenth place stage finish.

Laia Sanz, from the Honda Argentina Rally Team, finishes another excellent day, improving on her best results thus far in the Dakar. Tenth at the first time-check, she was able to cross the line in Iquique in ninth place in spite of having to use the roadbook manually for over 200 kms. Team-mate Pablo Rodríguez finished the stage without any setbacks.

Joan Barreda | 2nd | +1'41 | TEAM HRC
A very complicated stage today. I tried to push from the beginning upping the pace as much as possible, but Marc [Coma] fought really hard and caught up with me in the dunes. I could do no more. There are two really tough days still awaiting us, but we are going to continue following the same line. Tomorrow I’ll be opening the way again. I’m very pleased with the job done.

Helder Rodrigues | 7th | +11'44 | TEAM HRC
It has been a good one for me. I pushed hard. I knew that Cyril, Joan and Marc were really going for it, but I forced things to try and make up some time on the other riders. In the end I was out there on my own, not really fast, but I did well. I’m happy to still be here another day more. It has been long, but we have finished.

Javier Pizzolito | 14th | +19'40 | TEAM HRC
It was a very entertaining special. I’ve experienced terrain of every type: rocks, technical, fast and we finished up in some really nice dunes, so I was able to set a good pace, and finish here, waiting to arrive in Valparaiso.

Event information
Wednesday, January 15
Stage 10: Iquique - Antofagasta
Liasion: 58 km | Special: 631 km | Total: 689 km
It wouldn’t be the Dakar without fesh-fesh
The special stage, split into two sections with very different features, will begin with the descent towards the shores of the Pacific. The advance gained in the stage the day before may will be increased in the sand during the first two hundred kilometres. Even more skill will be required to tackle the sections of fesh-fesh in the second part of the stage. Once this difficult area is behind the drivers, they w ill all be delighted to twist and wind along the region’s mine tracks, and in particular to be welcomed by the majestic arch of La Portuda, a stone’s throw from the bivouac in Antofagasta.