What happened yesterday: Riders got a true taste of the Atacama desert, with wide open sections and lot’s of sand. Broadlink’s Riaan van Niekerk got lost twice and finished 17th on the stage, losing 35 minutes to Marc Coma, who won the stage by 1 minute 41 seconds from Juan Barreda. Riaan still holds onto 13th overall. 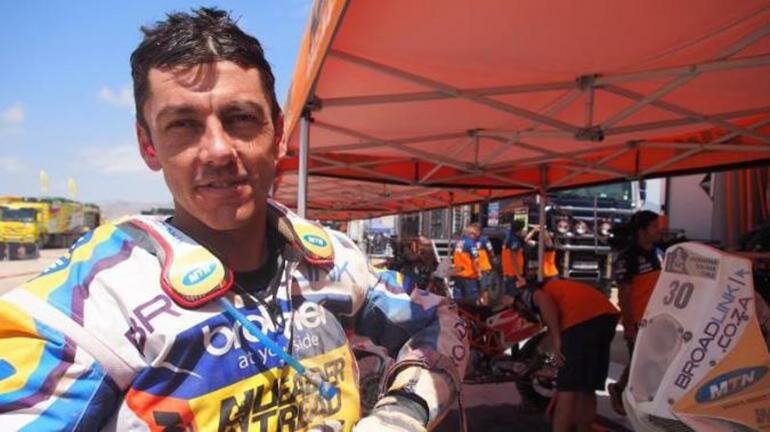 Kuba pryzgonski had a big crash, but still managed a 13th on the stage. Brett Cummings had a smooth day finishing 26th on the stage, he now sits at 30th overall.

It was a slow start for Broadlink KTM’s Riaan van Niekerk as he dived into the first of two specials for the day. The first was 231 Km’s long and started in the dunes, Riaan felt uncomfortable and struggled to find his rhythm, he soon adjusted and felt stronger in the second 215 Km special which consisted mainly of fast tracks with loads of fesh fesh. Riaan again got attached to Yamaha’s Michael Metge and they spent most of the day together. Riaan took a bath in the fesh fesh, crashing in the soft powder, “the stuff goes everywhere, it’s like a magnet”. He rode a cautious day as the Dakar added Jeremiah Israel to the list of non finishers, Jeremiah crashed out when there was a kink in the track and he went straight into the rocks. Riaan placed 12th on the stage just 23 minutes and 29 seconds down. He moves into 12th overall.

KTM Red Bull Factory rider Marc Coma has taken control of the race, he finished 5th on the stage conceding 11 minutes 26 seconds to his closest rival and stage winner Juan Barreda on the Honda. Juan picked up a 15 minute speeding penalty on yesterdays stage, he still believes he can win and will push hard to the end. Helder Rodrigues finished second on the stage and Cyril Despres third. Jordi Viladoms finished 11th on the stage and maintains his 3rd overall just 14 minutes ahead of Yamahas Olivier Pain.

This will be the longest special stage of the rally at 605 km’s and will be the decision maker of this year’s edition. There will be lots of mine tracks and many rivers to cross. Then competitors will have to navigate themselves through 120 Km’s of dunes in and around Copiapo. The fastest bike rider will be expected to be in the saddle for over seven hours, so this will prove to be both a mental and physical challenge.