Perfect lines greeted the junior surfers at Magnatubes for day 2 of the Billabong Junior Series presented by BOS event. With the slightly smaller surf on tap, the contest organisers decided to run with the U14 Girls round 1. Early standouts in this competitive division were Kai Woolf, Tayla De Coning and Gabi Lailvaux with Kai using her local knowledge to make the most of the conditions on her backhand. This was followed by the U16 girls round 1 and standouts here included Zoe Smith, Kelly Medley and Kayla Noguiera. 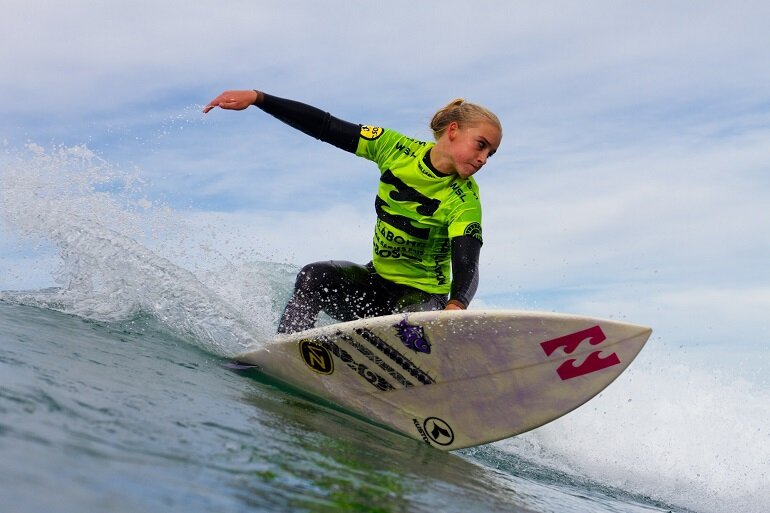 In the improving conditions on the high tide, the U20 Women were sent out for their round 1 heat, and Gina Smith, Nicole Pallet, Olivia Brand and Crystal Hulett were impressive.

Gina Smith, on her backhand, was a standout as the wind backed off with the low tide. She won the opening U20 heat in fine style scoring an 8.0 right off the bat. "It was definitely very rippable,” she commented afterward. “There were a few fast ones that would leave you behind, but some really nice runners you just had to be smart with wave selection.” She believes local knowledge definitely played a part in that first wave. “I know that second peak often works and I had been watching, so I was happy to get that one,” she said, adding however that on days with tricky conditions like today, it’s a pretty level playing field. “On low tide it is so shifty that it is anyone’s game,” she said.

Crystal Hulett from St Francis also surfed a clever heat to edge out Teal Hogg. “It’s dropped a lot since yesterday,” she said, “but they’re definitely easier to drop in on and there is more of a ride on offer.” Hulett explained how she and Teal Hogg paddled each other quite far up the point to gain the inside position. “I kind of redirected myself back down the point and that helped me get the scores I needed.”

In the Boys U14 round 1, heat winners included Saxton Randall (Durban), Karl Steen (Morningside), Jannik Bouwer (JBay), Angelo Faulkner (JBay), Ryan Lightfoot (JBay) and Eli Beukes (Kommetjie) amongst others. "My strategy was just to impress the judges," said Faulkner on his heat win, adding "So I'm happy with how it went."

“It was another great day here at Magnatubes,” said Billabong South Africa marketing manager Chad D’Arcy. “The forecast for the rest of the waiting period looks a bit tricky, but we should most likely be surfing tomorrow. We will reconvene here at Magnatubes in the morning to assess the conditions and make a call.”

Video highlights from day 1 can be found here www.youtube.com/watch. Results can be found here surfingsouthafrica.tumblr.com. The Billabong Junior Series Presented By BOS is part of the JBay Winterfest - www.jbaywinterfest.com - a multi-sports and music festival in Jeffreys Bay.

Prizes
There are a number of specialty prizes in this tournament.
* The winners of each division will win a Nixon Rhythm Tide Watch valued at R1,500.
* The BOS Surfer of the Contest, for the most impressive surfer at the event, will win R1,000
* The Zigzag Stepping Up Award of R2,000 is for the surfer who makes it furthest outside of his or her age division.
* The DaKine Highest Heat Score is for the highest heat score of the event, and the winner will receive a DaKine Hamper valued at R5,000.
* The Kinetic Racing Fins Best Carve award for the best carve of the event is a Kinetic Racing Fin hamper valued at R3,000.
* There is also a VonZipper Air Show and the winner will receive R2,000 and a VZ product hamper for the best air.

The tournament has both Pro Surf Tour (PST) and World Surf League (WSL) Pro Junior rated events, with valuable points and prize money up for grabs.