Fifteen of South Africa’s best Junior and Under-23 sprint paddlers have wound up their preparations at the Nelo Training Center at Montebelo Aguieira Lake in Portugal ahead of this weekend’s ICF Junior and U23 Canoe Sprint World Championships from 23-26 July 2015. 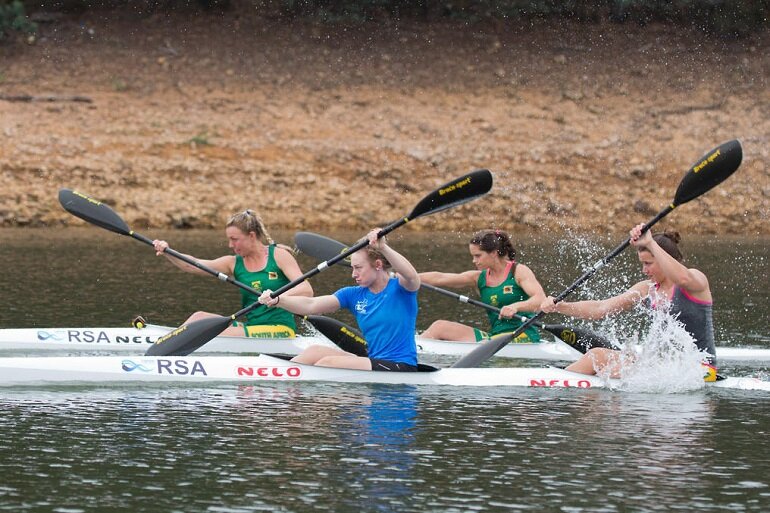 Sprint Committee Chairman and team manager Craig Mustard has been juggling the logistics of the arrival of the Junior and U23 teams with lost luggage and missing paddles being one of the many challenges he faced. The complete team should finally be together later today when up-and-coming Junior paddler Thulani Mathe arrives to complete the full team.

The team has enjoyed a few days at the quiet and picturesque venue in Montebelo Aguieira Resort & Spa – the northern central region of Portugal – and have had the opportunity to visit the Nelo Factory in Vila do Conde, where the latest canoe and kayaks are made with great care and precision.

This year, to the great excitement of the team, they will have the opportunity to race in some of the latest Cinco models which Canoeing SA has just purchased.

There is exciting action expected from the U23 men's K4 1000 metre event where brothers Louis Hattingh (2014 Junior Canoe Marathon World Champion) and Dewald Hattingh will team up with Bryan Leroux and Stuart Bristow to race in what is expected to be a strong competition.

This K4 has been assisted by coach Attila Adrovicz, former Hungarian K4 1000m silver medalist, who hopes to see a strong performance by this newly formed boat.

Also in this exciting line up is experienced paddler Esti van Tonder who is set to take on both the 200 meter and 500 meter K1 races. Van Tonder has been unbeaten in SA in the U23 division and, although plagued by a few injuries this year, hopes to be in the A final mix for both events.

The K2 U23 pair of Lolo Fick and Gabriel Van Wyk will be pushing for an A final in the 200m K2 event while the vibrant K2 women's U23 team of Brittany Petersen and Kerry Segal will be another duo hoping to walk away with a good final in the 500 meter race.

South Africa's first C-class paddlers, Cornelia Lemmer (U23) and Thulani Mathe (Junior), will make their debut at the global champs and they hope to gain some invaluable experience in this relatively new discipline in South Africa. Both Lemmer and Mathe have taken on this challenge in the hope to take the step up to the next level.

In the Junior kayak section Pietermaritzburg girls Donna Hutton and Kayla de Beer have teamed up to tackle the 500 meter K2 on Friday where they will be up against 24 other teams. Hutton will also be racing the 500m K1 and De Beer the 200m K1 on the same day so a very busy yet exciting day awaits the pair.

“We would like to wish the entire team all the best as they race against the best Junior and U23 sprint canoe and kayak athletes in the world!” said Canoeing South Africa’s Head of the Sprint Committee, Craig Mustard.

“The paddlers have sacrificed a lot and worked really hard to get to this point and we look forward to the entire team doing South Africa proud!”

A race timetable can be found here http://canoesprintportugal.com/index.php?page=timetable-results.

More info can be found at www.canoesa.org.za.