There’s something innately satisfying about the concept of a traverse; starting at one side, finishing at the other and dealing with whatever comes in-between. Well, that’s what Richmond and I thought, admittedly after quite a few bottles of wine, when we decided to traverse the Drakensberg. 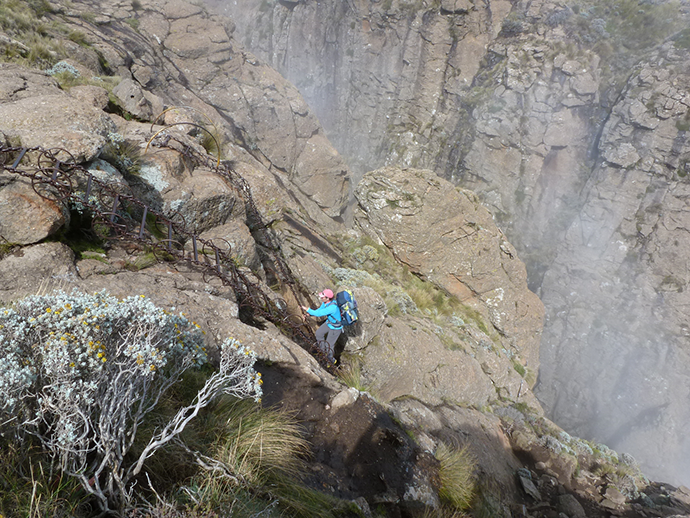 By way of introduction, the lofty Drakensberg - or Dragon Mountains - cut South Africa in half and house landlocked Lesotho. Richmond MacIntyre is an old-school adventurer, who tackles gnarly peaks and crocodile-infested rivers the hard way, with minimal backup or support; which is possibly why he’s 59, but looks like 70.

Traversing the Drakensberg was not an original idea. For our inspiration we owed Gavin Raubenheimer, who in February 1999 completed the trip within five days, establishing some ground rules in the process. Thereafter, to claim a so-called ‘Grand Traverse’, one must start at the Sentinel, finish at Bushman’s Nek and summit six designated peaks along the way. Other than that, however, one’s free to choose one’s own route. In fact, that’s the nub; for with no paths or signposts, the traverse takes up to 250km, depending on your navigator’s nous. And while most sensible parties take over a week, it has been run within 61 hours.

The fundamental choice was whether to go fast and light, possibly bailing if a storm hit, or slow and heavy, carrying enough food and shelter to sit out bad weather. We plumped for the latter, targeting five days, which wouldn’t break any speed records but might allow us to enjoy the scenery and ensure we finished. Richmond was to handle the navigation, I would arrange the transport and we also roped in my wife, Fiona, on the grounds she had contact numbers for Natal Mountain Rescue.

At the end of the first day, we lay huddled in our tent, wind buffeting the side panels and rain dripping through the canvas. Richmond morosely counted down the gap between the flashes and thunder claps, until we were in the epicentre of the storm. You might say things hadn’t gone to plan.

Having spent the previous night at Witsieshoek Mountain Lodge, we’d cadged a lift from the manager up to the Sentinel car park that morning. At the park gate, we’d sat in the heated car contemplating the swirling damp mist, summoning the courage to start. "You won’t get there by looking at it," prompted the manager, unloading our packs from the boot.

At 07h30 we set off, following the path beneath the Sentinel and up towards the amphitheatre. Scaling the chain ladders, we broke through the clouds into blue sky and sunshine. Then, we hacked over to Mont-aux-Sources (3,282 m), the first of the six obligatory peaks on our trip. It was a clear, blustery day, almost perfect conditions for hiking. But no matter how hard we pushed, we couldn’t make meaningful progress. My legs felt like treacle and my lungs like paper bags. With hindsight, we hadn’t really considered the implication of abruptly ascending to over 3,000m and trying to speed march across rough ground under 15 kg packs. By 17h30, we’d managed just 28 km, woefully short of our target. We dejectedly called it a day and pitched our tent in a small notch overlooking Cathedral Peak. The storm arrived minutes later.

As the trip wore on, we became acclimatised and our packs got lighter, and we averaged 40 km per day. However, there was never an easy kilometre. Rather naively, I’d presumed the top of the Drakensberg to be flat. Instead, over 30 perpendicular ridges obstructed our way and we climbed and descended some 1,300 m daily. Route finding was also far from simple. Though we carried maps and a GPS, it still took time to assess the lie of the land and plot a course through the rock bands. On the other hand, after the first night’s storm, the weather was kind and only once did we have to erect our tent during the day to sit out a downpour.

We would wake at 04h30, break camp around 06h00, and walk till dusk. We had hoped to stay in caves, but could never find them. So, instead, our accommodation was a lightweight tent in which two would have been company but three was a crowd, especially after several days without washing or changing underwear.

While we didn’t meet any other hikers on our journey, we did encounter several parties of Basotho men, with large, bulky sacks. Invariably, they’d be lurking at the tops of passes, waiting for darkness to steal down with their cargos. We’d shout exaggerated cheery greetings and speed on, casting furtive glances over our shoulders. To be fair, we never felt under threat; they were far too preoccupied with their illicit business.

The scenery in the northern Berg was classic alpine terrain: sharp peaks, deep valleys and steep flanks, around which we contoured, pondering precipitous drops. As we moved further south and deeper into Lesotho, the mountains became rounder, the river valleys broader and the landscape more pastoral. The corollary was that it also became more populated. There were no women, just men and young boys uniformly clad in woollen blankets, tatty shorts and rubber gumboots. Wading through innumerable stony rivers and shin-deep bogs, we envied their footwear.

While the Basotho shepherds seemed generously disposed towards a trio of foreigners stumbling through their territory, the Basotho dogs were a different matter. Each kraal was guarded by a pack, which sprang to attention as we passed. Thankfully, during the day, they were kept chained up and could only strain on their leashes, snarling and barking. Richmond delighted in baiting them, gesticulating and shouting insults. At night, however, when the dogs were let loose, he wasn’t so brave. And when we got caught out after dusk, amongst some kraals, we stuck tight together, hiking poles gripped like epees and pepper sprays primed.

The six designated peaks form the common nodes linking a Grand Traverse, but otherwise they’re a mixed bunch. After Mont-aux-Sources came Cleft Peak (3,281 m), which we climbed shrouded in cloud and spurred on by approaching rolls of thunder. Champagne Castle (3,377 m) was the most disappointing; two cairns on a slight hump, which we passed over barely noticing. The fourth, Mafadi (3,450 m), was the most unusual; a tabletop terrace pitted with rock pools, with an unprepossessing cairn marking South Africa’s high point. The fifth, Giant’s Castle (3,314 m), was the most dramatic: set out from the escarpment like a watchtower. We arrived there late on the fourth day and, after camping at its base, scrambled to the summit just after dawn.

The final peak on our route was Thabana Ntlenyana (3,482 m), the highest point in Africa south of Tanzania’s Mount Meru. Its name means ‘beautiful little mountain’, which is wrong on two counts. We climbed it the same day as Giant’s Castle, slogging along meandering river valleys, before making the steep uphill haul. Reaching the top in late afternoon, we paused just long enough to take some photos, as menacing black storm clouds scudded up the valley towards us. We’d no sooner raced off than the bombardment of rain and lightning started.

We spent that night at Sani Mountain Lodge, on top of Sani Pass. It seemed worth the 5 km detour; two of our inflatable mattresses had punctures and camping had lost its allure. We recognised the risk of flirting with comfort, but also reckoned that - with 55 km to Bushman’s Nek - we could make a big push and get out the next day. Consciences salved, we settled into a three-course dinner in Africa’s highest pub.

There were no easy days on the Grand Traverse, but the sixth day was definitely the toughest. While there were no more peaks to climb, there were still numerous ridges and it felt like we were running a never-ending steeplechase, with the fences getting progressively higher. As the day stole by, the weather also turned against us. Come late afternoon, we were blanketed in cloud, blundering along a steep flank, desperately trying to locate Thomathu Pass, which led down to Bushman’s Nek. Eventually, we had to concede defeat and that we were lost. Disconsolately pitching our tent on a small saddle, we decided to wait till the following day. At sunset the visibility briefly cleared, offering a panorama of gilded mountain tops sailing on a sea of marmalade clouds. It was a spectacular spot, but not where we wanted to be.

Early the next morning, we traversed around Thomathu Peak and limped down the pass to the Bushman’s Nek border post. Our Grand Traverse had finally ended, after six days and 30minutes, 240 km and 9,400 m of ascent. "What did you think of the trip?" enquired Richmond. My right ankle felt fractured, my left knee felt like glass, my lips looked like I had herpes and I’d lost almost 10% of my body weight. I honestly thought it one of the hardest things I’d ever done. But I couldn’t tell that to Richmond. "A pleasant amble in the hills," I ventured. "Precisely," he said, studying me carefully. I hope he was lying too.

1. The Drakensberg Grand Traverse (DGT) starts at the Sentinel car park, finishes at Bushman’s Nek border post (via Thomathu Pass) and takes in Mont-aux-Sources, Cleft Peak, Champagne Castle, Mafadi, Giant’s Castle and Thabana Ntlenyana. Depending on your route, it will likely involve between 210 km and 250 km.

2. Most parties go in either April-May or September-November, hoping to avoid the winter snows and summer thunderstorms. Whenever you go, be prepared for bad weather.

3. In July 2010, Ryno Griesel and Cobus van Zyl completed the DGT in 60h30m. Most parties take
six to twelve days.