When I first asked Daniel Barnard to join me on a hike in the Drakensberg a couple of years ago, his reaction was one of disgust. “We don’t hike! Hiking is too easy!” were the words of someone who has paddled the Thames River in England from source to mouth solo, unsupported and non-stop in 72 hours. Since then I've convinced him otherwise and we've completed some amazing hikes in the Drakensberg, all with a bit of a twist. 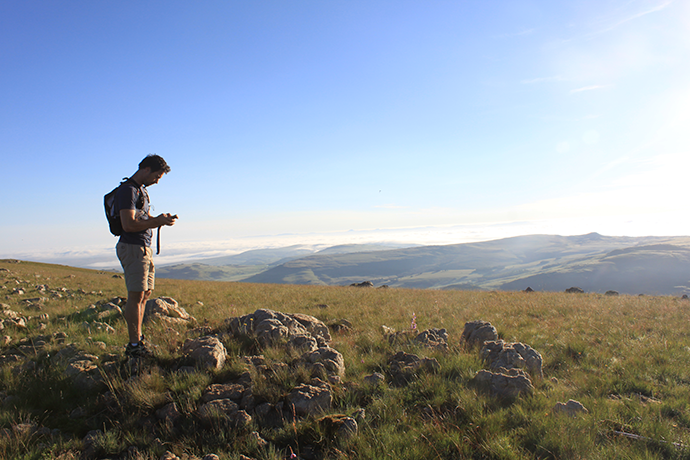 Being competitive individuals, it was only natural for us to stumble upon the 9 Peaks in 9 Provinces adventure. The purpose of the adventure? To do it in the shortest possible time. This feat has been accomplished by a number of individuals and groups, but the person who put this amazing experience on the map is Kobus Bresler. Kobus holds the record for completing this adventure in just over eight days, solo and unsupported. His time was also faster than any group, thus establishing the time we wanted to beat.

We left Jo'burg around 10 a.m. on 21 December 2012 and headed to Haenertsburg, in the Limpopo, where we would start with the Iron Crown peak at midnight. We arrived early that afternoon and decided to do a quick scout of the route, but the scouting session only got us lost and demotivated, so we ended up at the Iron Crown Pub for a beer, dinner and planning session. After our meal we found the correct route and arrived at the starting point at approximately 8p.m. We decided to have a three-hour nap and set the alarm clock for 11:30 p.m., so we could start promptly at midnight. At 12:28 a.m. we woke up, a bit startled and already behind schedule. It was windy and the fog thick, so we used a GPS to find our way to the top on the barely visible footpath.

Leaving Iron Crown, we drove 307 km to Die Berg, the second peak on our trip and the highest mountain in Mpumalanga. The road to Lydenburg was slow as we drove through small settlements and on below-average roads. We stopped next to the road, roughly three kilometres from Die Berg's summit, and approached it straight up the steep side, not minding the rough thicket we had to negotiate to get to the top.

From Die Berg we took the back roads to Middelburg before getting onto the N4 to Nooitgedacht, a 370 km drive. Nooitgedacht is the highest mountain in the North West, and we accessed this peak via the Mountain Sanctuary Nature Conservation area, situated west of the peak, making it a 14 km round trip. We arrived at the sanctuary at 10:30 a.m., hoping for a quick two-hour trail run up to the peak and back. It ended up taking us two-and-a-half hours due to the midday heat, which left us with battered bodies. We got back to the sanctuary at 1 p.m. and only had three hours to get to Toringkop in Suikerbosrand, approximately 180 km away, as visitors aren’t allowed in the nature reserve after 4 p.m.

We made it to the reserve's northern gate with 25 minutes to spare, and continued to Toringkop, the highest peak in Gauteng. In six minutes, we completed the formalities of hiking the few hundred metres to the top of Toringkop, took a photo and marked a waypoint on the GPS before we were off again.

The N3 marked the start of the Drakensberg peaks and we tried to catch up on some sleep en route to Harrismith. Rain, lightning and thunder were evident everywhere, dampening our spirits somewhat as the Drakensberg is not a place you want to wander around in such conditions.

After a 328 km drive, we arrived at the Sentinel car park just after 9 p.m. on 22 December. Namahadi is the highest peak in the Free State and the first of the Drakensberg peaks. We set off just after 10 p.m. in pitch black darkness and used GPS coordinates to steer us in the general direction of the peak. The last few kilometres were tough, mentally and physically, due to an increase in rolling hills, fatiguing bodies and sleep-deprived minds. After reaching the summit we stopped for a quick power nap. The cold woke us 40 minutes later and we got back to the car just before 8 a.m.

Namahadi ended up being more strenuous than expected and with Mafadi still to come, we knew the Drakensberg would take a lot out of our bodies and play unfair games on the mind.

We followed the road via Bergville and Winterton towards Injisuthi, a 201 km drive and the starting point of the Mafadi hike. Mafadi is the highest peak in KwaZulu-Natal and South Africa. Again there was lightning and heavy clouds, but it cleared up and we set off at 1 p.m. on 23 December. We paced ourselves well, but it took all our efforts to reach the top and we were so broken that we had to take a nap to recover for the technical hike down. We completed the Mafadi hike in a record time of just over 20 hours, but our bodies felt it.

KwaDuma (3,019 m), on the Lesotho border near Ongeluksnek, Eastern Cape

From Injisuthi we drove via Winterton to Howick before turning west towards Underberg and finally arrived in Kokstad, a distance of 583 km. KwaDuma is the highest peak in the Eastern Cape and the last of the Drakensberg peaks on our trip.

It was raining, the roads were muddy and slippery and we got horribly lost. We eventually arrived at the Thabase Police Station, the hike's starting point, at 11 p.m., but the police officers were reluctant to allow us into the unknown at night and suggested we start our hike at first light. We woke just before 5 a.m. to a cloudy and windy, but beautiful Christmas day. We managed to find the shortest and easiest path to the escarpment, but as we started the steepest part of the ascent it started raining heavily and the head wind picked up considerably. Despite this, KwaDuma ended up being one of the nicest and most beautiful hikes of the entire trip.

From Thabase we passed Mount Fletcher, Maclear and Elliot before turning west towards Middelburg in the Eastern Cape, to Murch Point, a distance of 621km. We reached Murch Point, the highest peak in the Northern Cape, early on 26 December and set out just before 5 a.m., struggling through thick Karoo shrubs and muddy undergrowth. It was cloudy and cool, and as we approached the summit, a thick fog covered us and required the use of the GPS for our final approach.

With only Seweweekspoort left, we followed the N1 to Laingsburg before turning towards Ladismith, a 542 km drive. Realising that this last peak was going to take every bit of energy out of us, we left the car just after 4 p.m. The going was rough, with thick and tough fynbos and lots of loose rocks and massive boulders to negotiate. Our pace slowed as we tried to zigzag where possible to conserve ourselves, however the view from the mountain was impressive and our spirits were high because our trip was coming to an end.

We summited Seweweekspoort exactly 4 days, 18 hours and 38 minutes from the moment the trip started; a new record. We covered a total distance of 146 km on foot, which took us almost 54 hours. We drove a total of 3,132km and spent approximately 60 hours en route between peaks. Our total ascent on foot was just short of the height of Everest and we maintained an average hiking speed of 2.7 km/h. We had also broken the record for the round trip to Mafadi, from the Injisuthi campsite, by more than 6 hours, completing it in 20 hours and 28minutes.

We were both relieved and very proud of bagging the highest peaks in nine provinces, and setting new records! Will you be the next to break ours?