Cho Oyu - The Turquoise Goddess at the Top of the World

On 7 May 2012, at 09h12 Nepalese time, I summited Cho Oyu (8,201 m), the sixth highest mountain in the world and in the same range as Mount Everest (8,848 m), a mere 25 km away. In so doing, I became the first South African woman to stand on this little spot of Mother Earth! This brief moment was the culmination of years of mountaineering, months of specific planning and training, and the preceding five weeks of trekking and climbing from our departure point at Kathmandu. Standing at my side was my accompanying Nepalese sherpa, 'Little' Lakpa, a veteran of Himalayan mountaineering. The rest of the South African team, with their sherpa support, reached the summit soon after; Lance Metz, Ben Swart, Wayne Downing, and Donald O’Connor. The team leader, Sean Disney, sacrificed his summit and remained at Camp 3 (7,700 m) due to a shortage of oxygen cylinders. 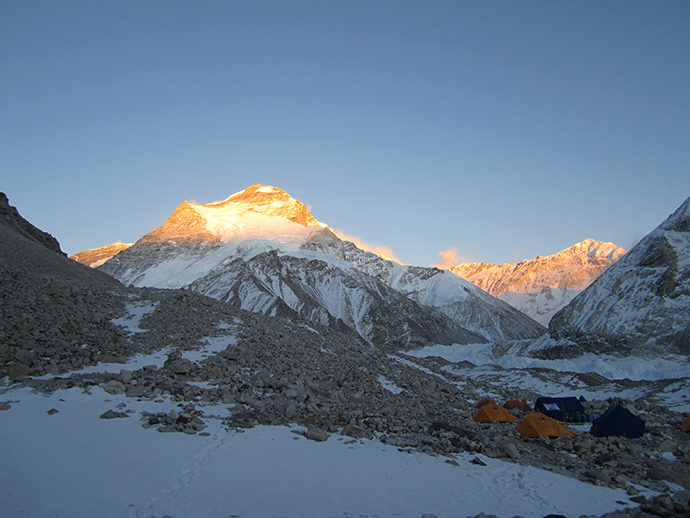 Scaling mountains such as Cho Oyu is a team business and materially influenced by expedition leadership. My summiting and the team’s success is a function of enjoying the benefits of a highly experienced expedition leader and an excellent team of Nepalese sherpas. These little-big people are giants at ferrying enormous loads of gear and material up the mountains, and just as importantly they attach climbing ropes in the most inaccessible places ahead of climbers.

Homage is paid to Sean, the quintessential expedition leader. He led from the front, pushed from the back, and walked alongside us. The leader also has to make critical decisions about safety, climbing ‘rotations’ (climb high, sleep slow), acclimatisation processes (the human body can adapt over time to high altitude to allow it to partially compensate for the lack of oxygen), and assessing weather patterns. Sean constantly monitored weather forecasts to programme the final rotation for the summit attempt. His accurate weather decisions were crucial to our success. On some of the rotations we faced blizzards and winds of up to 80 km/h, but crucially on summit day we enjoyed the most spectacular clear and calm day.

The expedition commenced in Kathmandu. From there we travelled in an entourage of Land Cruisers across the Nepal/Tibetan border to Base Camp (BC). At this point two tonnes of equipment and food were loaded onto yaks (a sort of long-haired ox that inhabits the Himalayan area), with the sherpas in charge, and transported to Advanced Base Camp (ABC). The entire extended team hiked the 23 km to ABC over two days. During this time our gear was tested when we were confronted by a massive blizzard.

ABC was located at 5,700 m (just 100 m lower than the summit of Kilimanjaro). The selected ABC area is a sea of huge boulders randomly scattered and surrounded by peaks covered in snow and ice that tower 7,000 m into the air. Moments of high visibility rendered an awe inspiring view of Mount Cho Oyu to the east. We spent most of our six-week expedition here at ABC; it was our ‘recovery zone’ and where our bodies adapted to the altitude and rigours of mountain climbing. From ABC we ventured through a three-kilometre boulder-strewn valley to reach the foot of a monster 400 m vertical scree slope (scree is a steep slope with loose rock and debris) before reaching Camp 1 at 6,400m on a snow-covered ridge. We repeated this to and fro hike four times as part of our acclimatisation process.

Next up was Camp 3 at 7,700 m. To reach Camp 3 we had a steep and challenging rock and ice crossing of 500 m (vertical). This camp was the final staging post for our summit attempt, and in preparation for our summit bid we slept connected to oxygen. At this altitude we were in what is called the ‘Death Zone’; an altitude at which the human body can no longer acclimatise. Simply put, the volume of oxygen is not high enough to sustain human life. At 8,000 m above sea level, the oxygen volume is only a third of its value at sea level. The supplemental oxygen used during the night is intended to ensure that proper rest is achieved. This is not an easy achievement due to a condition called ‘altitude sleep apnoea’, which causes terrible sleep deprivation. At high altitude one is conscious of one’s difficult breathing when awake, but when sleeping one’s body goes into a very slow breathing rate that causes one to wake up in a panic and with a feeling of suffocation. This is called ‘Chain Stokes Syndrome’.

We set out for the summit at 01h00 on the morning of 7 May. Lance planned to attempt the summit without oxygen, but the rest of us were happily sucking oxygen through our masks. After an hour of climbing up a steep snow slope we were faced with a 200 m vertical limestone wall called ‘the Yellow Band’. New ropes had not yet been fixed for this season, so we had to use the ropes from the previous seasons, which entailed risk. At times only one person could be on the ropes as these seemingly helpful aids could not be trusted. Each person had to wait patiently in the dark and cold for a turn to perform their gymnastics on the ropes, climbing across the rock and digging crampons into the surface. Extreme care had to be exercised, and at times I could not feel my fingers and toes and made a constant effort to wiggle and move them to keep the circulation going. Just before sunrise the temperature plummeted to minus 40 degrees C. With a great sense of relief I eventually crested the last section of the Yellow Band, only to be met with further rock faces. Each step required a conscious effort, as did each struggling breath.

Once past the series of rock faces I finally reached the summit plateau. From here it was another 45 minutes of laboured breathing, ploughing knee deep through snow or scraping over iced layers before I crested the true summit. I literally counted out 15 steps, rested, took another 15 steps, and so it went to keep myself moving. My supporting sherpa reached the summit first, and started jumping up and down as he pointed to something behind him. I wondered how it was possible that he was jumping while I could only stumble! Then I saw it ... Everest! I was told that only when you see Everest and the prayer flags are you on the true summit. A few more steps and I was on the summit of Cho Oyu! I dropped to my knees as it was the most humbling feeling; the privilege of standing on one of the highest mountains in the world and having a 360 degree view of the most majestic and beautiful mountain range in the world - the Himalayas. It was a dream come true.

But no successful expedition is over until one has safely descended from the summit. I took extreme caution descending and constantly told myself not to make any mistakes. I finally reached Camp 2 at 16h00, utterly exhausted but elated, and past my physical limits but content. I had accomplished my objective!

Having completed a long and tough expedition that tested all my faculties and will power, I embrace my life philosophy that one needs to dream big and do what it takes to achieve such dreams.