Climbing to the top of Europe - Mount Elbrus, Russia

It is also through this passion that I first came across The Seven Summits; the famed seven highest mountains on seven continents. After doing some research I realised that if I put my mind to it, I could actually conquer some of these mountains - me, a five-foot mother of two! 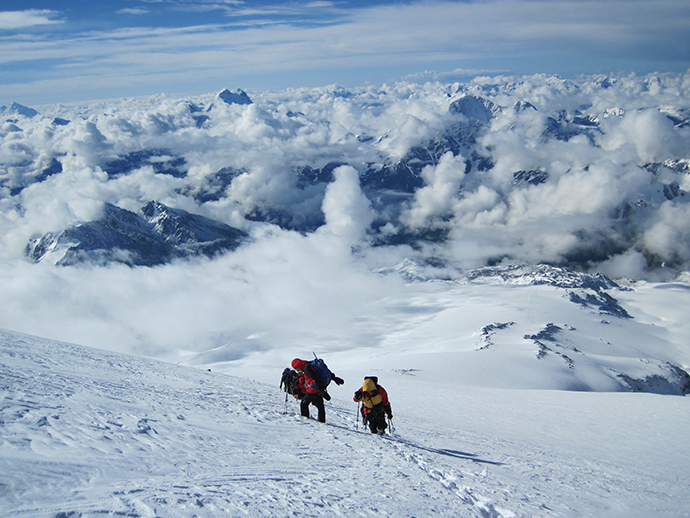 Despite some serious health setbacks, including being wheelchair bound for a while, nothing was going to stop me from being in the mountains again, and going for my new goal. On 22 June 2012 my team and I left for Russia on the adventure of a lifetime. We were going to climb Mount Elbrus, a dormant volcano close to the border of Russia and Georgia. At 5,642 m (18,510 feet) it’s the highest mountain in Europe and makes up one of the coveted seven summits. Logistically it’s quite tough to reach the Baksan Valley, where Elbrus is located, and after being in airports for 12 hours, flying for 16 hours and driving for a further 8 hours we finally arrived.

Our first acclimatisation hike was to climb Mount Cheget. There is a large military presence in this area, due to it being on the border of Georgia, and we couldn’t take the chairlifts up until the soldiers with their large machine guns went ahead. In 2011 the south side of Elbrus had to be closed for climbing, as the rebels had planted bombs and caused major unrest in the area surrounding the mountain. So we were somewhat anxious to get this hike over and done with.

We left for base camp early the next day, as we had heard that the chairlifts were not working on the last section, and this would mean a very severe uphill hike with extra-large duffel bags. Our guide, Yuriy, called ahead and asked a snowcat driver if he would be able to drive us up to The Barrels, our base camp at 3,800m, but the snow was melting fast so this might not be an option by the time we arrived. Packed and ready with around 200 kg of gear between the six of us, we set off in the waiting snowcat and what followed was the second scariest experience of the trip for me. As we started ascending, the snowcat lost traction and slid down a cliff to almost land on a pile of rocks. We all had to bail out and cling on to the rocks for our dear lives. Fortunately no one was hurt, but I was taking no chances and decided to walk the rest of the way up; this beast was not ruining my climb!

Reaching base camp I discovered that the ‘barrels’ are old oil barrels that have been converted into comfortable rooms, with six wooden 'bunks' per barrel. Our mess hall was an old converted container, in which our cook, Vladimir, produced hearty Russian meals and stored our water that came fresh from the mountain.

Life on the mountain at high altitude is not easy, and I was the only girl in our team. There's no time or space for shyness here, and eventually something as gross as seeing someone carry their five-litre pee bottle to the long drops becomes normal.

Months of training and preparation had us all in good shape for the long and hard daily acclimatisation hikes and final summit push - that alone would be a 15-hour slog on our feet.

We climbed higher and higher each day, returning to base camp at night to get our bodies fully acclimatised. The rule of thumb is to climb high and sleep low, to decrease our chances of acute mountain sickness, which is life threatening.

Weather patterns are totally unpredictable. One minute we would be climbing in glorious sunshine with views for miles, and then within three minutes the clouds would cover everything and you could hardly see your teammate in front of you! Temperatures range from around 5- to minus 15 degrees, with a strong snow storm thrown in for good measure. We were climbing in the summer season, and the massive amounts of snow falling resulted in us having to wade through snow as deep as my waist in places.

Our first summit attempt ended after only 30 minutes, with a complete whiteout and the snowcat sliding off the path toward the rocks on the glacier below. After a group discussion it was decided that we descend on foot and attempt the summit again at midnight. Mount Elbrus is known for her frightening storms, and weather alone has led to numerous deaths on her flanks.

After an early dinner at 6 p.m. we all settled to get some shut eye. At about 8 p.m. I fell asleep, only to wake again at 9.30 p.m. I wrote a blog entry by headlamp and started getting dressed around 11.30 p.m. As I stepped outside, the sight took my breath away. There was the most amazing full moon over Mount Elbrus, the skies were clear and there wasn't a breath of wind.

With crampons on, we got back on the snowcat, feeling both excited and nervous. The ride only took about 30 minutes, but felt it like an eternity before we reached the bottom of the Pashtukov Rocks at around 4,900 m to 5,000 m and disembarked. It was freezing and really windy as we set off in single file in the darkness, the only sound was the crunching of ice underneath our crampons. It did not take long for our fingers to start to freeze, and we had to stop a few times and swing our arms to get the blood flowing again.

After about three hours of hard and slow switchback climbing in the dark, we could finally see the line above the clouds signalling sunrise, and Yuriy pointed out the planet Venus to us. During a brief rest, we saw the shadow of Mount Elbrus' twin peaks darken the clouds below; wow, this is what dreams are made of, sitting above the clouds at sunrise! The snow slope was so steep and deceptive that just when you thought you were over the final ridge, another one revealed itself, and this is when mental strength had to kick in and will your body forward.

Unfortunately we had to say goodbye to three of our team members later that morning, as altitude and sheer exhaustion had taken its toll. The affects of altitude are very scary to witness, and I remember continuously doing sums in my head to test myself on the route as we climbed higher. Safety is my number one concern on any trip I undertake, and I will do everything possible to avoid falling prey to 'summit fever', which many climbers do and in many instances with awful consequences.

The traverse section of climbing, before you reach the saddle that lies between the two peaks of Mount Elbrus, is very exposed and the pathway only the width of one boot. I had to keep reminding myself not to look left and concentrate on not tripping over my crampons, or stabbing myself in the leg. We were now racing against time as we could see major clouds developing down below. There were a few other climbers on the path by now and I couldn’t believe my eyes when I saw a man collapse in the path, clearly sick with AMS. Our guide tried to coax him to descend, but he would have none of it and a few hours later I saw him trying to climb the final slope, falling and swaying like a cobra! 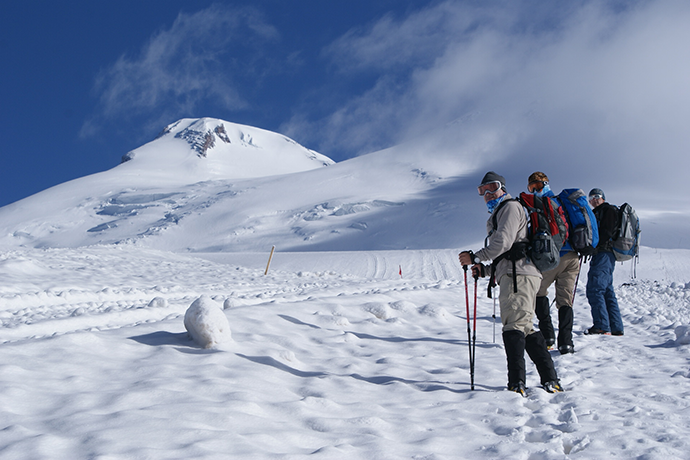 Once we reached the saddle we were tired but in good spirits. The area was a lot smaller and steeper than I had imagined, and the final summit slope was monstrous! After nine-and-a-half hours it was going to take all our mental strength and will power to get us up this final obstacle and to the top of Europe. We had a quick drink and a few bites of an energy bar before Yuriy roped us all together and we set off once more. The air is so thin here that we literally took one step and breathed, another step and rested. The vertical drop to the right was enough to keep me on full alert and I never took my eyes off the snow in front of me.

After about an hour Yuriy stopped and said he was very concerned about the brewing storm, and within 10 minutes it was snowing heavily. Eventually Joe, who was behind me, shouted that he couldn’t see anything anymore, and then things became serious; the mountain will always be here, but we only have one life! We got trapped in a major electrical storm 100 vertical metres from the summit, and all of a sudden we were stranded in a complete whiteout! Our lives were more important than standing on the summit and we still had to face descending through this storm for another four to five hours, roped up to our guide on the dangerous exposed traverse. So with zero visibility and our legs cramping from tiredness, we had to dig deep once more to will our bodies forward and down. It was by far the hardest thing I have ever done, but I did it.

Unfortunately we were unable to attempt another summit because you need to book a time on the mountain - The Barrels are booked way in advance, especially in summer - and our flights back to South Africa couldn't be changed. This is what mountain climbing is all about, and you are never guaranteed a summit.

We will go back one day, perhaps within a year if funds are raised! I’m trying to be the first South African-born female to complete the Seven Summits, as currently there is no one who has done it!

Training tips for a mountain expedition:
As we can’t all go hiking during the week, the best alternative is to load your backpack with books and hit the StairMaster at your gym. Gradually increase the weight, by adding more books, as you get stronger.

You'll need thighs of steel for the steep inclines, so build and strengthen your legs by going up and down the Westcliff stairs in Johannesburg, or any other steep stairs you can find in your area. Do this with your backpack and boots on!
Buy ankle weights and strap them to your legs before each workout.

Packing tips:
Make Ziploc bags your new best friend! Pack everything and anything into these, and take extras. You'll love your dry gear when others have wet thermals!

Keep prescription medication on you and share the quantities if you are travelling with someone. But have a backup supply should something get stolen or be misplaced.

Russian travel tips:
Book your own international flight and save thousands! I shopped online extensively and Qatar was unbeatable! If you don't go direct, be prepared for longer layover times, but the savings are worth it.

Always have colour copies of your documents and stash them in different bags, socks, etc.

Take a photo on your cellphone when you receive your ‘white paper’ from customs as proof! If you lose this precious white piece of paper you will end up in a Russian interrogation room somewhere and miss your flight.

Buy a Russian sim card (like MTC or similar) whilst you are there, as you get unlimited internet usage for just R65 and calls are charged at half the price of Vodacom/MTN rates.

For more tips and essential information, check out my blog: www.mountelbrus.blogspot.com, or follow me on twitter @candyhooke