Get Blown Away in Mauritius

In 1974, Larry Yates’’surfing movie, ‘Forgotten Island of Santosha’, was released and highlighted a break and perfect 8-10 foot tubes in Tamarin Bay, Mauritius. Even though this spot has been surfed since the early 1960s, the exotic images of this remote island getaway spurred many other surfers to discover this now world-famous location. With good swells and strong south-easterly trade winds, it also didn’t take long for the windsurfers to find the island. Today, Mauritius is known as one of the best kitesurfing and windsurfing destinations on the planet. 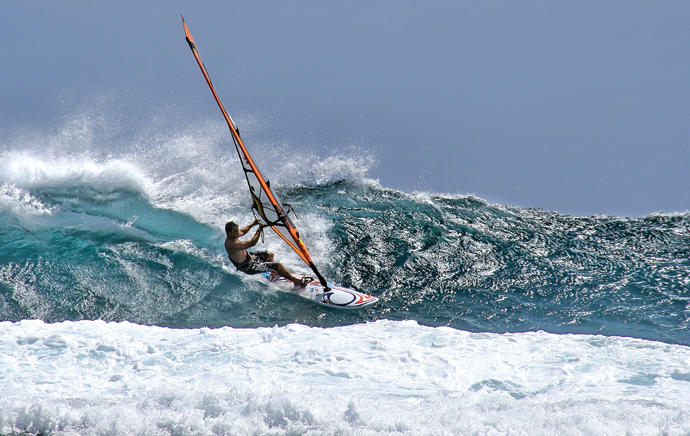 I first visited Mauritius on a family holiday in 1996. We stayed in Blue Bay, in the south-east region, as we'd been told the wind and water sports were good. I was a keen sailor already, and this trip gave me the opportunity to discover diving, skiing, and wake boarding. But what I really wanted to try was windsurfing. After two weeks I had only experienced a small part of what the island had to offer, but I was hooked. Sixteen years later I returned to explore more of this windsurfing paradise.

Most of the good windsurfing spots are in the privately owned areas, so if you want easy access to the water you'll need to book accommodation on the beach you plan to sail. I recommend renting a car and staying in a more central location. For wave sailing, I’d stay somewhere in the south-west region of Le Morne. For freeride/slalom, I’d recommend the south-east region around Pointe D’esny, however, if the noise of overhead aircraft bugs you then head north towards Poste Lafayette.

Although I didn’t get to sail all the following spots mentioned, the guys I stayed with put these sites top of the menu.

Riviere du Rempart region in the north and north-east parts

Cap Malheureux is a small fishing village, located on the island's northern tip, with a public beach. The area has a few coral reefs, so test the waters out carefully or get advice from the Sinbad Kite School. There are a couple of wave spots as well, but be aware of the outer reefs as most are not passable at low or medium tides.

Anse La Raie is approximately two kilometres from Cap Malheureux. This lagoon is almost two kilometres in length and can be accessed at the Anse la Raie public beach or the public beach in front of the Ministry of Sports Youth Centre. The lagoon has a few shallow areas and some wave spots on the outer reef.

Roches Noires is further down the north-eastern coast, and with a predominantly side-onshore wind it's one of the biggest lagoons for flat-water blasting. Access to the water is difficult due to all the private properties on the beach, but there are some public beaches adjacent to the concrete jetties.

Flacq region in the east

Poste Lafayette has a great public beach that's ideal for launching both kitesurfers and windsurfers. The beach is wide and the bay can be sailed all the way to the other side, but stay clear of the strong currents going out to the reef from the main channel!

Belle Mare is very popular with lots of hotels and activities on and off the water. The beach is quite big and conditions are typically side-onshore, with long runs along the shoreline, but be aware of the sharp 'stag horn' type coral along the outer reef.

Palmar is similar to Belle Mare, except the lagoon is not as wide. There is public access from the southern side of the bay, but it's a bit trickier for kiters due to the narrower beach. The stretch to Poste Lafayette is about 10 km and makes for a great long-distance ride.

Trou d’Eau Douce is one of the island's special spots. Access is best from the public beach's northern side, but rather hire a boat and cruise over to Île aux Cerfs Island where there are many small white sandy beaches to launch from. The lagoon is fairly big, with onshore conditions and the possibility to ride a super-smooth speed track just inside the breaking surf, but avoid it at low tide. From here you can ride a marathon 24 km all the way to Blue Bay.

Pointe d'Esny/Blue Bay is situated on the south-eastern point of the island. It's one of the clearest and biggest lagoons on island. Side-onshore conditions and great riding along the outer reef make this site very popular. Beach access can be problematic unless you rent one of the numerous private residences, or enter via one of the two access points.

Savanne region in the south

Riviere des Galets is a little peninsula next to a river mouth, west of Surinam. It offers good surf conditions when the wind dies down, and kiting or windsurfing when it picks up. The wind can be tricky near the shore, but the wave on the reef is pretty radical; fast and unforgiving, and should only be ridden at high tide.

Le Morne lies on the south-western tip of the island. It's probably the most commercial and visited area on the island, and a popular bathing beach. It has a comparatively small lagoon, but good wind and a public beach on the point. If you’re a skilled sailor, you'll have one of the best wave rides of your life here. Riders should familiarise themselves with the dangers of the current and sudden drops in wind pressure.

La Prairie is the upwind lagoon in Le Morne. It is a large but shallow lagoon, with some urchin fields and big patches of stag horn corals. Darker patches should be approached with care, and the downwind rides are fantastic.

Little Reef is the inside reef and the safest for wave riding with its seaweed covered rocks and minimal corals, but it can make a pretty hollow wave at low tide.

Manawa is the wave to the south east, just past the main channel. It’s an easy and popular reef break, with relatively deep water (1.5 m). The wave runs quite slowly, allowing for easy cutbacks and deep bottom turns. To get there you have to sail over the channel where the current flows with the wind, resulting in almost no apparent wind. A bigger board and sail is recommended to carry you through the lighter parts.

Chameaux essentially starts at the channel and runs north towards One Eye. It's probably the ultimate in wave riding for windsurfers and kitesurfers. In a solid 3 m swell from the south east, you can pick up a 150 m fast and hollow ride with good sections for aerials. However, the hollow waves make it shallow on the reef and only 50 cm deep on high tide.

One Eye is just the Chameaux wave breaking further north. Many windsurfers ride here, but the northern half of the break is reserved for surfers. The break ends in a narrow channel with a strong current that will suck out any passing objects or persons. The wave is super smooth and hollow, and gets really big, but always keep one eye on the next wave as it’s often much bigger and breaking earlier. Localism is strong here, so be careful.

So if windsurfing in Mauritius appeals to you, then here’s a few tips to get the most out of your stay on the island.
When to go
Windsurfing travel guides recommend good wind from June to October, but locals will tell you June and July are better, and a bit less crowded. The winter months bring a pretty consistent wind, around 15 to 20 knots, with it never going much over 25 knots. However, the wind here doesn't carry the same power as the cold, dense air of Cape Town, so you'll need to upsize your equipment.

A few things to be aware of are:
• Coral abounds in some areas, so bring a pair of slim fitting booties to protect your feet, and leave your favourite race fins behind!
• The current can be quite strong in the channels, near the outer ring reef, and I’ve heard stories of people being sucked out to sea. Do some research before heading out. Many regulars recommend a GPS PLB (Personal Locating Beacon) and/or carrying a two-way radio.
• When it’s cloudy and rainy the wind can be unpredictable, so rather than risk a 6 m wave on the reef or one of those channels with no wind, come in.
• There have been cases of friction between locals and visitors, so have respect for other people in the water or avoid the waves on the weekend when they’ll be riding their home spot. There’s no localism around the flat water areas, and the locals would be stoked to have someone sail with them!

After spending just a few days in Mauritius, I discovered more than I had during the two weeks of my first visit, 16 years ago. This fantastic adventure would not have been possible without my host; Christopher Tyack, and my sponsors; Point-7 and the Mauritius Tourism Promotion Authority.