Standing in the terminal at Cape Town International, I’m staring out the window looking for the plane that was just there a minute ago … A fairly large squall has just hit the building and I’m wondering if it’s such a good idea to board. I take a look around and everyone is staring out of the window and looking just as concerned as I am. 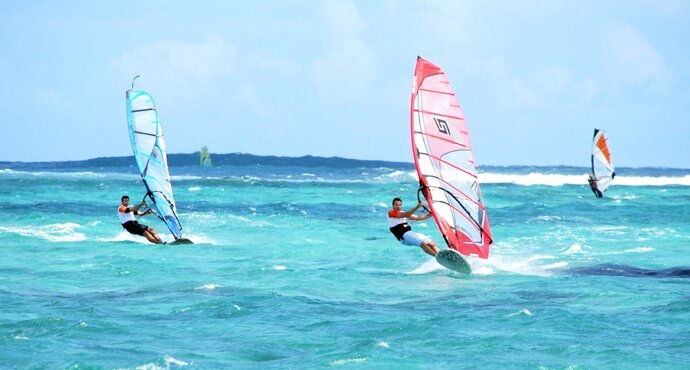 Rewind back a few weeks to an email I received to take part in a windsurfing event in Mauritius, called the Malibu Classic, which was taking place on 1 September 2012 at le Morne in Mauritius.

This was the first time the organiser, Mauritius Tourism Promotion Authority, had expanded the event to make it an Indian Ocean-wide one, and an offer of tickets and accommodation sweetened the deal. Their main objective was to get the reigning national champions from South Africa and Australia to face-off against the Mauritian aces, but due to such short notice and work constraints, Eugene van Niekerk, our SA champ, was not able to take part. Fortunately for me, as the co-opted journalist, I still got to go and snap a few pictures and bring back some good stories about the Malibu Classic.

Catching the Friday afternoon flight out of Cape Town, I arrived in Mauritius around 9:20 p.m. I was met at the airport by Julien, a French-sounding bloke who looked like he could woo a hundred chalet girls and was full of energy, so I gave him my heaviest bags.

We cruised out to Blue Bay, where I would be staying for the duration of the event. Here I met my Aussie flatmate, Rowan Law, who had arrived two days earlier and been windsurfing non-stop with the locals.

The next morning I woke up to a view that you would typically find in a travel brochure. Keen to get going as we still had an hour's drive to the competition at le Morne, Rowan and I smashed some breakfast and then hit the road. Arriving in le Morne we were greeted by a packed car park. The super friendly locals introduced themselves and we soon found out who was who in the zoo. Their top guns were Fabrice Leclezio, one of last year's winner, Jean-Francois Ulcoq, and our young friend Julien Maurel. Cruising through the car park we checked out everyone’s kit and saw that the kit of choice was 100 or 110 L boards, with 7 to 8 sq.m sails.

Stepping on the beach we were greeted by a warm sea breeze, a DJ pumping out the tunes, a fantastic Phoenix beer, and a whole lot of people and colours.

Not wanting to miss any of the action, I got registration out the way and was ready to race.

The course was simple and consisted of a dry beach start, then two legs of downwind slalom, followed by four legs of figure-8. The organisers ran two elimination heats to cut the number of local and international entrants down to a winners and losers final. The shorter course and fairly tight angles meant the start was super important! The Mauritians put on a great performance for the crowds as they are really strong, but they were not the only ones. After the first round of eliminations, the fleet is very competitive and everyone is looking comfortable on the choppy water, despite a swell coming in off the reef and gusty winds. That is except for me. I dropped a gybe (a term for 'changing direction' at a mark/buoy) and got eliminated in the first round. All eyes were now on the winner's final to see who was in top form. 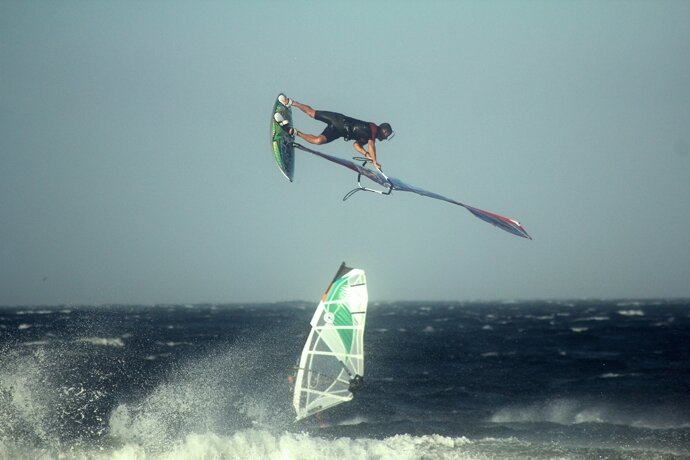 After several recalls due to a slight drop in wind pressure, local ace Fabrice, young Julien, Contest Director Christophe Tyack and Rowan made a clean break. The wallaby was hunted by a very on-form Fabrice, but he only just matched Rowan’s pace. The following five legs remained unchanged, despite huge pressure coming in from just a few board lengths behind. The first bullet goes to Australia.

Between rounds, the kiteboarding long distance race came to a roaring finish after participants completed a giant downwind slalom course that started from the centre of le Morne Bay. It looked like fun and kept the spectators busy.

Round two saw the wind pick up and the waves could be seen coming in over the reef, making the outside gybe a whole lot of fun. The elimination rounds went well, with the two tourists (myself and Rowan), and all of the top Mauritians going through to the final. The locals were eager to get one back over the Australian, but this was not to be. In a near perfect repeat of the last final, Rowan edged ahead of Fabrice and held him off all the way to the finish.

With the light starting to fade, and everyone wondering where the day went, the organisers held one more full-fleet race, and the start line really looked big! In the struggle for clean air, local hero Fabrice dominated the start and first gybe, but Rowan managed to pull in front of the chasing pack to finish second. With a 1-1-2 result for the day, this secured Rowan's seat as the first Indian Ocean Champion of the Malibu Classic for the Windsurf Slalom category. He was followed by Fabrice Leclezio, Julien Maurel, Jean-François Ulcoq, Christophe Tyack, and Yan Mayer.

Full credit must go to Christopher Tyack and his team for running such a smooth operation. The fact that he could also race was a testament to his organisational skills and the professionalism of his team. Thank you to the sponsors, in particular Santosha and Malibu, for facilitating the success of the event. Special thanks to the Mauritian Tourist Promotion Authority for sponsoring our tickets; it was a truly fantastic experience and I hope us tourists will return the favour at next year’s event in July.

v1. What was your overall opinion of the Malibu Classic?
I thought a one-day event would be a bit short (ours are 3-4 days), but the format worked well and gave us time to check out the rest of the island. Nothing beats a great beach vibe!

2. Is the event by invite only?
Anyone can enter and you’ll have a great battle whatever level you are at.

3. Will you go back?
Absolutely; it's a great break from the SA winter, great sailing, and lots of places to explore especially if you island hop to neighbouring Reunion and Rodrigues, which are also great windsurfing destinations.

5. How does South Africa compare to the international riders?
Our top guys are on the same level as theirs. It will be a good match up next year.

6. What are the main windsurfing events on the SA calendar to look out for?
Our next event is a speed competition in Walvis Bay, followed by the start of the WSA (Windsurfing South Africa) Tour in PE next month.

For more information on the sport go to www.windsurfingafrica.org.