Mzansi’s top spinners and drifters converged in Pietermaritzburg for an action-packed, high-octane, and tyre-popping event on the last weekend of July. Nestled in KwaZulu-Natal’s capital city, the Mkondeni Market played host to more than 60 of South Africa’s high-speed and precision drivers, who went head-to-head and battled it out for the titles of King of Spin and Drift. 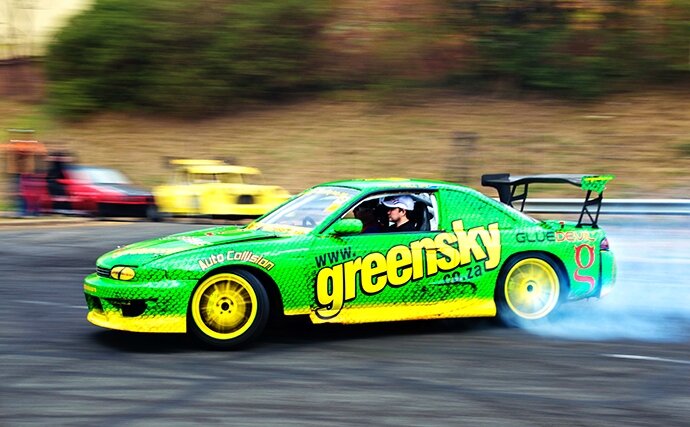 The event was hosted by the twelve-year-old club. Event co-organiser Michael Chetty emphasized that this year’s installment of the annual competition was the best by far.

Chetty went on to say that the primary aim of these annual events is to promote and develop motorsport in South Africa and in KwaZulu-Natal, which is fast becoming a drift hotspot in South Africa. One of the future goals of the club is to host a professional drifting league in which professional, high-speed, precision drifters can compete against local drifters, who pack just as much of a punch as the big boys from the SupaDrift Series.

At the weekend-long event, one could find many teams representing various parts of South Africa. Lionel Jordaan and his team represented Cape Town, while Hamoo Kuber represented Team Spinworld from Limpopo. Team KZN Drift also attended the event, a day after participating in the National SupaDrift X Series in Port Shepstone. Strongly representing PMB was Team SKN, a father-son team comprising of the youngest driver in the competition, Kameel Moodley, just 17 years of age, who proved that age is merely a number in this game. Other famous PMB drifters included Dennis Moodley, Andries Graaf, Bruce Swartley, Mothi Bhikshu, and Marcel Swartz. Holding up the fort for the Dundee region was Preshu Singh, who represented the 360 Boys. Durban-based club Wenties Spinners also made an appearance, giving the crowds even more to scream at as they competed competitively in their respective classes.

The event started off with a bang on Saturday, 27 July, seeing the likes of KwaZulu-Natal’s gymkhana specialist Jeff Subramoney chase down the record for the highest number of donuts in a minute.

The Durban-based spinner managed a feat of 18 donuts in the allocated time, falling short of the current record of 22. Limpopo-based spinner and stuntman Hamoo Kuber wowed crowds as he performed electric stunts in his BMW. Hamoo was seen jumping in and out of his car while it screeched around the track, destroying its rear tyres and dumping volumes of smoke into the atmosphere surrounding the loading bays of the market.

Representing the Cape was Lionel Jordaan, who had travelled the furthest of all the drivers and gave one of the best performances ever seen at the Sidewayz Show and any other spinning show in South Africa. Lionel, along with his crew of stuntmen, performed little skits around a high-revving, smoking BMW as it spun endlessly with no driver behind the wheel. Overall, Lionel Jordaan took the title of King of Spin at the end of the weekend-long event.

The event, as always, was held under the watchful eye of the Motorsport of South Africa (MSA) officials. Sidewayz is committed to providing an event that is entertaining, fun, and most importantly, legal and safe. Sidewayz challenged local street racers to put their skills into action against the top racers the event played host to, in a bid to reduce the large amount of street racing occurring in Pietermaritzburg and Durban.

Chetty commented that the Sidewayz Show differs from the rest as it is one of the only shows that allow spectators, nestled in the loading bays of the market, to be almost on top of the action unfolding just a few metres in front of them. Chetty exclaimed that, “There is no better feeling than the vibrations running through your body from the high-revving machines that are tearing up the tarmac a few metres from where you seated.” 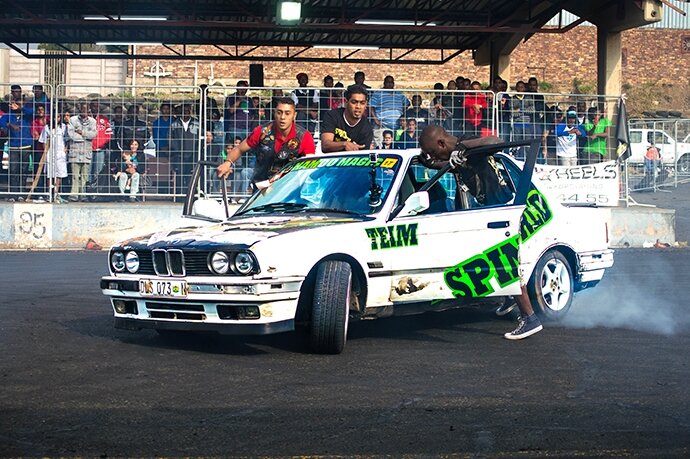 After competing in the SupaDrift X Series on the Saturday, Team KZN Drift, sponsored by Auto Collision, attended the event on Sunday. Morné Venter, David Nell, Shane Ferreira, Chris Landsberg, and Tony Jardine were amongst the SupaDrift drivers that participated on the day. Chetty claimed that these precision, high-speed drifters exposed the local drifters to a whole new dimension of racing. The drivers showed what their cars are made of as they performed tandem-drift runs through the narrow bays of the market. Crowds were left speechless and fellow competitors left inspired.

Morné, who drives a Nissan Skyline R34 with a custom-built RB25, 6 cylinder, turbo-charged drift engine, said that there wasn’t much difference between the SupaDrift Series and the Sidewayz Show because, at the end of the day, it is all about knowing how to control your car in extreme angles and at high speeds. The track is just a complement to your skills as a driver." Morné went on to say that the gymkhana events, like Sidewayz, give him good practice in navigating tight corners. He also stated that it gives the spectators the chance to understand the critical difference between drifting and spinning. In his last words, Morné expressed how motorsport has been on the rise in KZN for a while now, with the only limiting factor being that of finding a sponsor. Morné's car, nicknamed the Hooligan, did not shy away from its reputation as it tore across the tarmac, leaving in its wake plumes of white smoke and nothing but dropped-jaws from the crowd!

The event also saw the first-ever lady driver compete against the rest of the drifters. From the very beginning, Letisha Munnrey showed that she had what it takes to come out on top. Finishing in the third fastest time, in her Nissan 200Sx, within her division, Letisha proved to be a force to be reckoned with!

Event co-organiser Reece Williamson joined in the fun as he gave the SupaDrift boys a run for their money. Driving his red and black BMW, with custom-fitted Nissan Engine, Reece put his money where his mouth is and hit the tight corners of the track flat out, as his drift-monster spat out shreds of rubber causing smoke to engulf the entire arena within seconds and drenching spectators with the smell of burnt rubber.

At the event, Sidewayz also drove home a strong point indicating that they are more than just a motorsport club. They have awarded three bursaries to three scholars from the Msunduzi District in their effort to give back to the community for years of loyalty to the club. Mandela Day banners could be seen all around the event, as well as on each of the cars participating. One lucky visitor won a trip to the Pro Drift Series in Japan.

All in all, the event proved to be a success thanks to the amazing crowd that filled the stands on both days and to the talented and brave drivers from all over South Africa. Just over a decade ago, when the club hosted its first event, a mere 6 drivers competed. Sidewayz is happy to announce that to date, more than 100 different drivers have competed in events, in all forms of racing from drag racing to drifting and spinning.

Sidewayz is proving to be the driving force in the promotion and development of motorsport in KwaZulu-Natal, and the once grass-roots level event is now becoming one of the most anticipated events in South Africa.