The Empty Quarter is the world’s largest sand desert and renowned for being one of the most inhospitable places on Earth. So what prompted one British adventurer and two Emiratis to trek through this vast Arabian desert by foot and camel, covering 1,600 kilometres in 44 days? 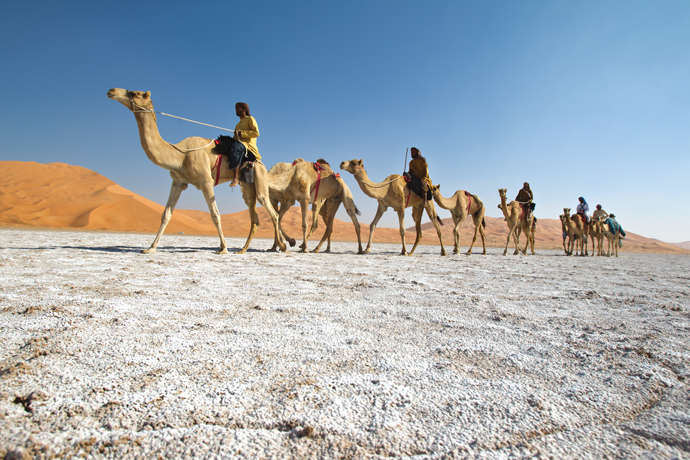 What started out as a dream to recreate a similar journey became more of a concrete idea over the ensuing years. Meticulous planning followed involving a lot of bureaucracy and sensitivity as borders and politics were a real issue, something not experienced during the 1947 expedition. This made getting to the start line a two-year project that was fraught with challenges. The journey was to coincide with the celebrations to mark the UAE’s 40th anniversary and would start in Salalah, Oman, and end in Abu Dhabi.

Hayes personally selected the two Emiratis that accompanied him on the trip. He also had the support of the UA Armed Forces for the selection process and the Chief of Staff put his personal blueprint on the expedition. The two Emiratis were selected for their camel experience and strength of their Bedouin culture. As it turned out, both men were very keen to do the trip and proved themselves to be extremely resourceful, which resulted in a tremendous rapport developing amongst the men.

The biggest hurdle the 2011 expedition faced was the lack of water. Thesiger had water in the form of oases, a luxury Hayes and his teammates didn’t have. The oases they did come across had either dried up or were tainted with mineral salts and thus undrinkable. Like Thesiger, they knew that they would have to rely on basic provisions, nature and Arabic hospitality.

They also soon realised it was a myth that camels required little water. As they were under a limited time frame, they had to push both themselves and the camels harder, sometimes covering 45 to 50 kilometres a day. As a result, the camels were gasping for water every two days. Maintaining the camels’ health was pivotal to a successful expedition.

The camels, perhaps sensing what lay ahead of them, decided on early revenge. On day one of the expedition, heading through the town towards the Salalah Mountains, they were spooked by cameramen ahead of them. Seeing this as a possible ambush they took fright and started bucking. Hayes and one of his Emirati teammates was thrown, landing them both in hospital with concussion and Hayes needing 13 stitches to a nasty head wound. They were then stuck in town for a further six days as tropical Cyclone Kaila hit and caused flash floods in the Dhofar Mountains, which made getting through them extremely tricky. This was definitely not the start they had been planning!

The intense heat of the desert proved to be very draining and necessitated early starts to avoid the midday sun. However, most days still involved up to ten hours of riding and walking. Some of the other challenges faced were sandstorms and high winds, as well as trekking on shifting and unforgiving sands. ‘The desert is beautiful, but brutal’, a comment Hayes made that rang true on many an occasion.

One of the highlights of the trip was undoubtedly experiencing the Bedouin way of life. Wilfred Thesiger hated progress and change, especially regarding technology and development. He was perhaps a forerunner of today’s environmentalist. Hayes, however, found the culture to be alive and well, experiencing a culture and hospitality that has changed little over the years. The Bedouins love sitting around a fire, slaughtering a goat or camel and making guests feel very welcome. There was a lot of joviality in the form of talking, dancing and singing. All done of course minus the aid of alcohol, especially in Oman! Progress and change is of course inevitable and Bedouins want modern life as much as the next person.

The only piece of modern-day equipment used by Hayes was an emergency satellite phone, as the journey was meant to be done in the spirit of Thesiger. As the journey progressed, enormous respect and a greater understanding developed for the early British explorer.

The expedition was filmed for a documentary, Footsteps of Thesiger, and Hayes wrote a book of the same title that was launched in the UAE mid January and will soon be available to buy on Amazon. The book ended up being far more challenging to write than Hayes had anticipated. It is written in the style of a modern-day adventure, but also illustrates the inner journey of the mind and how the adventurers were tested, both practically and psychologically. It covers some of the modern-day challenges faced by the team, the Bedouin culture and the simplicity of life. This makes it multidimensional and the writing became far deeper than initially expected. The completion of the book has most certainly added yet another dimension to an already very accomplished and driven man.

The success of the journey has been lauded on television and in speeches across the UAE, as well as in the book. One can only look forward to Adrian Hayes’ next adventure!