The idea of touring a piece of Africa on a motorcycle will get both bikers and non-bikers excited, and has made it on to many a bucket list. Exploring the roads less travelled, with only basic supplies, is a total mental escape, and for some reason a border post quite literally becomes a gateway to another world, awakening even the most dormant of adventurers out there. Our nine-day trip took us through Serowe, the Makgadikgadi Pans, Gweta, Maun, the Caprivi, Kasane, Victoria Falls, Nata, and Francistown. This is our humble story ... 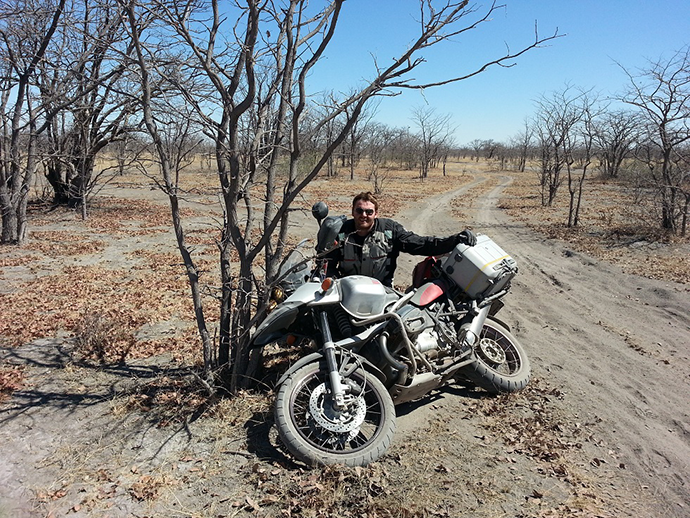 It was with high spirits that we met up at a garage in Pretoria. Our group of four consisted of Renier on his GS1150, DeVos riding a GS 1200 Adventure, my brother Jacques on his faithful 650 Dakar, and myself on a F800GS. We left at midday, hitting the N1 North in the direction of the Martins Drift border post. This was supposed to be the uneventful part of the trip, but just before Ellisras I had an intimate encounter with a newly compacted section of road that was still under construction. Luckily, the crash bars protected the body of the bike and there were no mechanical issues. After taking a few pictures, throwing back a quick shot of my brother’s sherry for the shock and cracking a few jokes, we were back on the road.

Arriving at the border post late that afternoon, we completed the paperwork and then exchanged our Rands for Pulas. We left in darkness, jokingly reflecting back on the promise we'd made to each other to not drive during the night. Passing through Serowe, we arrived safely at the main gate of Khama Rhino Sanctuary around 9 p.m. However, our relief was short lived and our day far from over when we discovered almost 2 km of deep sandy roads separating us from the camp site. The guys, who had been to Tanzania on bikes, later told me that this was the toughest sand section they’d ever come across. At 11 p.m. we finally set up camp, devoured a few rat packs, and celebrated the end of the first day with a glass of well-deserved whiskey and some cigars.

Tackling the 2 km of sandy roads back to the gate in daylight was still tough, but apart from a few minor falls we got through it rather quickly. At the gate we met up with a representative of the Khama Rhino Sanctuary and handed over several 'Stop Rhino Poaching' stickers and rubber arm bands, as part of our efforts to support the anti-poaching cause.

Back on firm tarmac, we left Khama, passed through the small village of Letlhakane, and made our way towards the Makgadikgadi Pans. We were looking forward to driving on the salt flats, but this was not to be as the pans were surrounded by a very challenging belt of sand. Once again we battled to get the bikes through and reached the edge of the pans thoroughly tired, tested, and dehydrated. As the sand gave way to more manageable rocky roads, we chased the setting sun to Kubu Island.

Upon arrival, we were greeted by a massive baobab tree and surrounded by jaw-dropping scenery. This place truly is magical, as well as humbling, and takes your breath away.

Unfortunately Kubu Island has no running water; a commodity we were desperately short of. After making a plan, we set up camp next to some mammoth baobab trees and reflected on another surprisingly tough yet amazing day.
Day 3 - Kubu Island to Gweta ( 131 km)

After packing up, we set out to explore the pans surrounding the island. Driving on the flat sections is quite exhilarating, but you have to be careful because right beneath the dry, cracked surface lurks a wet and slippery layer of clay.

Our next stop was Gweta, which meant passing through the sand belt surrounding the pans once more. It was 120 km of hell, full stop! We all came off our bikes at one stage or another; Renier broke his pannier, while De Vos damaged his engine mounting and also tried his hand at climbing a tree with his 1200GS J. My bike had to be cut out of a fence after a mishap with a sand trap.

We had planned to sleep in Maun, but it was late and we didn't want to drive at night, so we opted to stay in Gweta, at Planet Baobab. On the way there I noticed that my bike couldn't accelerate beyond 60 km/h. It was a concerning discovery, but one that would have to wait until the next day. On arrival, we plunged into the pool, ordered supper, and rehydrated. Feeling more human, we turned our attention to the damaged bikes. Donning our headlamps, we made some 'bushveld' maintenance repairs using cable ties, super glue, Pratley steel, and, of course, duct tape.

After breakfast we solved the acceleration problem on my bike by making a few quick adjustments to the clutch cable. Setting off, we continued north to the Caprivi, via Maun, but Murphy was not done with us yet. Approximately 116 km outside of Maun my rear tyre deflated due to the tube rupturing. Just then a group of friendly locals stopped and offered to help us patch up the tyre. After a two-hour battle we finally hit the road once more, but just 12 km further the tyre went flat again. By now the sun was starting to set and we were in the middle of nowhere, so we pulled the bikes out of sight and set up camp. Just then a bakkie stopped and offered to take us back to Maun, but not even 15km later the bakkie overheated, due to a cracked radiator; it was going nowhere! Eventually we found a second bakkie and arrived in Maun at 3 a.m. It had been a very long and frustrating day, and the comedy of problems had caused a definite sense of humour failure in the group. So it was with great relief that we checked into Sedia Hotel’s camping grounds.

The tyre problem was a big one, so we decided that Renier and De Vos would continue to the Caprivi, while my brother and I stayed in Maun to resolve the tyre issue. By lunch time it appeared as though we had a workable solution, so we discussed our plan of action over lunch and opted to stay in Maun for another night and rest a bit. We planned to go for a drive later that afternoon, only to discover that my tyre was once again deflated! It seemed to be a case study in Murphy’s Law. I called the local tyre supplier and made arrangements to have the tyre fixed early the next morning.

As soon as the tyre was fitted, we left for Kasane, via Gweta and Nata, fighting strong winds all the way. Nearing Kasane, the baron, dry landscape that had surrounded us since day two slowly started to give way to slightly greener vegetation, and afforded us our first elephant sightings of the trip. Elephants are beautiful and majestic, but the over population of this species has wrecked havoc on the area’s vegetation. It’s an unfortunate and sad sight to see. We arrived in Kasane just before sunset and re-joined the others at the luxurious Chobe Safari Lodge.

Knowing that Zimbabwe charged a ridiculous fee for vehicles entering the country, we only took two bikes to minimise costs. After crossing the border we proceeded to the Victoria Falls, to start our day of white river rafting.

As it was the end of the dry season, the river’s levels were low and therefore perfect for one big and wet adrenaline-filled adventure! The only downside was the climb back out of the gorge. After a day of superb rafting, we returned to Chobe Safari Lodge.

We left Kasane early and proceeded to Nata. After stopping in Francistown for lunch, we pushed on towards the border, checking in at Kwa Nokeng Lodge. For the first time during the trip we had a camp site with grass … it was heaven!

Back in South Africa, we came to appreciate how lucky we are to stay in this wonderful country. And although our trip had turned out to be far more challenging than anticipated, it was a great experience and one that we'll always remember.

I would like to thank our sponsors; Adventure Inc for supplying some fantastic Sea to Summit and Buff products, and Outdoor Foods for providing the delicious, convenient, and ready-to-eat food packs. Thanks guys, we really appreciated your support!

And now if you'll excuse me, I have to deal with the small matter of repairing the damage to my bike. My insurance company is going to love me.