Crossing Africa on a Bamboo Bike

I'd been thinking about taking a bicycle tour across Africa for a while, but I just hadn't found a good enough reason or the timing wasn't right. But this all changed when the Chieftainess Nkomesha Mukamambo II, a traditional leader who administers (well I must add) her land in a district as big as Gauteng, wanted to build a new, innovative school for one of her villages, and Sport2build was approached to raise funds. Serena and Giorgia, my partners in Sport2build, and I happily accepted the challenge. The plan was that I would cycle from Chongwe, in Zambia, all the way to London, a distance of approximately 8,400km. With the help of a well-organised media and awareness campaign, funds would be raised through supporters making donations. Furthermore, networking along the way would be fundamental to spreading Sport2build's message: Sport can change your life! 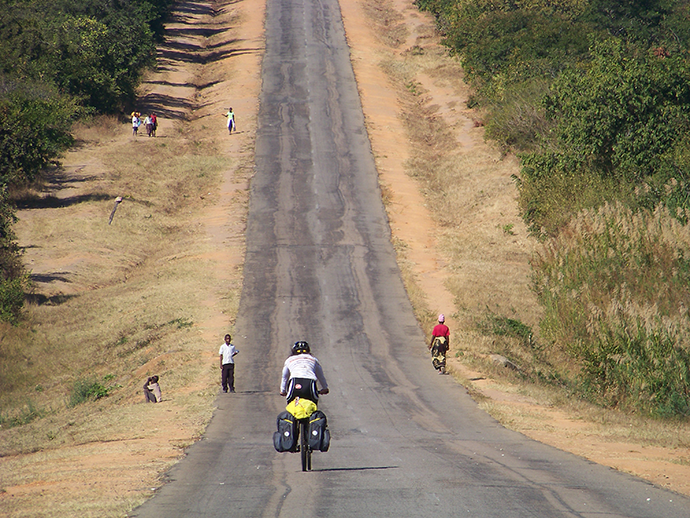 Our first objective was to find a mode of transport representative of Africa to demonstrate that it's possible to do incredible things with very little. We decided that a bamboo bike would best represent the true spirit of this journey because it was a Zambian product, innovative, ecological, economical (about $700) and able to absorb, muffle and deaden the harsh conditions of Africa's ramshackle roads.

London would be my final destination and I needed to reach it before 29 August 2012, the date of the Paralympics' Opening Ceremony. We had chosen the Paralympics because it is the ultimate expression of sport for all, and embodies social inclusion, commitment and exemplary stories of people who don't give up and have made resilience the backbone of their lives. These are the same values that we try to convey to coaches and children through our work.

The departure date of 15 June was set and before I knew it I was standing in front of the Chieftainess' palace in Chongwe, 35 km east of Lusaka, along with about two hundred well wishers, who had come to see me off. There were some official speeches and then God was asked to protect me and the bike during the journey and keep away any ferocious animals and prowlers on the roads I would ride. Today I can say that their prayers worked very well!

In Zambia I had many supporters, mainly children, along the way. Often there would be one child on the lookout and as soon as he saw me would shout “Musungu, musungu,” and then sprint like mad to call his friends and siblings, who would come running out to greet me.

By its very nature the bicycle is freedom of movement and competition, and whilst cycling through Nyimba I met two charcoal burners, a very common occupation in this part of Africa. They were each carrying three bags of charcoal, weighing 40 kg each, on their bikes, and after chatting for a while we started cycling together. Taking advantage of a slight downhill, one of the men suddenly sped ahead. Not one to back down from a challenge, I picked up the pace and by the time I had caught up with him, my speedometer had registered 48km/h. As I drew up beside him, we looked at each other and then burst out laughing, telling each other, “You are strong!”

Leaving Zambia behind, I entered Malawi from Moocha, next to Lundazi. The terrain was very bumpy as the once-tarred roads were now potholed, gravel roads. Some 451 km later, I left Malawi and entered Tanzania. The road from Iringa to Arusha personified everything that a cyclist would not want to find, such as piles of stones, wet soil that got in-between the mudguard and wheel, cement waves caused by tracked vehicles, rocks protruding from the surface and white sand. It was here that I encountered a cobra, but we were both too busy minding our own business to scare each other. Watching it slither off, I envied its agility as it floated across the sand while I was sinking into it because of the weight of my panniers.

I learnt it was better to cross the border in the evening, as there were less people and you got through quicker. In addition, you were ready to head out to your new destination early the next morning.

I only stayed in Kenya for a short time before going in search of the Moyale Express to take me to Moyale, a market town on the border of Ethiopia and Kenya. Cycling from Isiolo to Moyale was not an option due to the very real threat of Somali bandits, and a lone cyclist would be easy prey. However, taking the Moyale Express turned out to be one of the riskiest parts of the entire trip. I found a seat in the last row, where you want to sit on a school trip but absolutely want to avoid on a journey through a desert of black stones. When speeding over a bump, a passenger sitting in the first row is jolted 30 cm, someone in the middle 60 cm and in the last row about a metre. The crash landing that followed usually involved tears of pain or a groan, but the bus driver did not stop or even slow down. The sound track of the journey was one of scraping iron, glass that rattled, and bolts that rebelled against the welding that kept the bus in one piece. In spite of the windows being sealed, dust invaded every nook and cranny of the bus and by the end of the trip I was the same colour as some Ethiopian shepherds and Somalis I sat next to.

Ethiopia is a world on its own and the country I stayed the longest in. The 1,683 km ride saw me cross countless mountains, in the cold and rain. On one very long uphill, to 3,300 m, I was accompanied by children running alongside me as they sang and clapped their hands. They were excellent supporters and very curious, unlike the Kenyan or Tanzanian children, who would never think to touch my bike. The Ethiopian kids would grab my handlebar, the speedometer or panniers, and then ask for money. At times I lost my patience, but I realised that they asked because they had already received from tourists, who don't understand that they are doing more harm than good.

To enter Sudan at the Metemma/Gallabat border you need to pass through a horde of security checks, including camera and laptop inspections, and the pictures on my memory card. This puzzled me as what could I have photographed in those 400 m since entering Sudan?

Drinking and eating well in the desert is fundamental, so I drank plenty of water and ate low fat yoghurt, bread, biscuits, and at times crisps, which are rich in salt. Travelling through the desert was incredibly tough, especially after one o'clock in the afternoon when the heat became unbearable and the winds blisteringly hot. Drinking was no longer enough and my body craved a cold shower. Surprisingly, Sudan proved to be very organised and I would find ceramic jars full of water next to bus stops, at petrol stations or simply under shelters in front of shops, for passersby ablution purposes. In every village I passed through, I was invited by the locals to join them on their colorful carpets for lime juice, karkade and ilumur; a tea prepared with seven local spices, which rehydrated my desert-ravaged body. Despite the challenging conditions, it was with a heavy heart that I left Sudan and its people, who had been so helpful and welcoming. Governments and religions are one thing, luckily people are another.

Entering Egypt, I followed the course of the Nile to Cairo and was often stopped by police, who tried to scare me into taking the train to the capital because they said the situation after the revolution was very still dangerous. Regardless, I continued on and never felt in any danger. Plunging into the capital's chaotic traffic was fantastic after cycling for 7,000km alone. The bedlam reminded me of my Milanese origins, and I had great fun zigzagging amongst the cars and buses. On my rest day, I went sightseeing and visited Tahrir Square, and watched families eating ice cream in crowded shops that stayed open until late.

I flew into Malpensa and whilst in Europe the bike’s components started to give me problems. I visited four mechanics, who changed different parts, including the back wheel, and I was good to go again. It was only after I boarded the ferry in Calais when I realised that the end was near.

Early on the afternoon of 28 August I found myself on the Tower Bridge, just in time for the Opening Ceremony of the Paralympics. It had taken me 74 days and 8,400 km to cycle through seven countries on my bamboo bike. A journey like this is like a drug and it’s difficult to immediately return to your normal life, as the head is more inclined to start preparing and organising the next adventure rather than get busy with everyday life. Luckily, a speech by Stephen Hawking came to my rescue and reminded me to, “Look up at the stars and not down at your feet. Never give up work. Work gives you meaning and purpose, and life is empty without it. If you are lucky enough to find love, remember it is there and don't throw it away.”

Sport2build is still raising money for the school, and an international cement company has pledged to donate all the cement needed. To support, donate to or find out more about this incredible cause please visit www.sport2build.org or email or .