The Chalbi Desert in desolated northern Kenya is bandit country, but instead of keeping guard our eyes are tightly shut and our faces are covered with layers and layers of cloth. It's a futile attempt to stop the sand from blasting us and filling up every orifice in the human head. We’ve been sitting, standing, and lying like this for what feels like an eternity, our bodies continuously hurled into the air and then slammed down unceremoniously onto the back of this unforgiving cattle truck, on the road of hell - the Moyale Road. This road is known amongst travellers as a ‘must do’ to be regarded as a salted and intrepid adventurer, and we had been warned by those who had survived the absolute discomfort involved when undertaking this gruelling ordeal. At the time all I could think of was that we had to do this, as it was the safest way to get us and our tiny 150 cc delivery motorcycle through this bandit-ridden part of Kenya to the Ethiopian border. From there we would continue our travels to Egypt with ‘Pole Pole’, our trusty motorcycle. 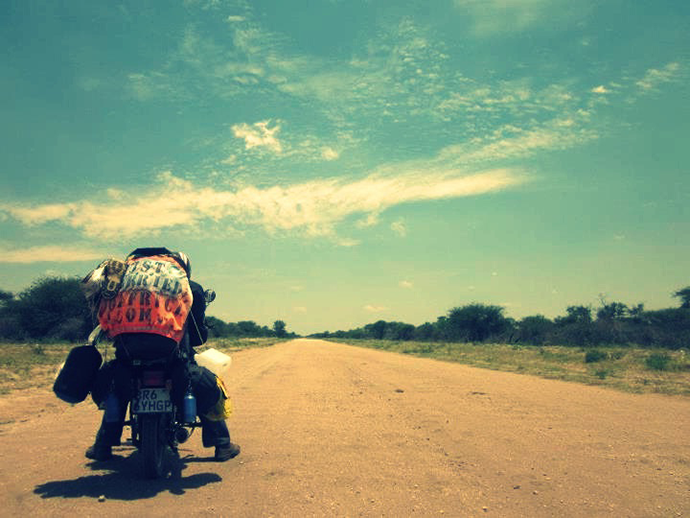 Having started in South Africa, the overall trip was expected to take five to six months and would cover about 10,000km. Oh, and did I mention that this was Dorette's and my honeymoon?

If you’re heading north from Nairobi, Kenya, and your aim is to get to Ethiopia you have two choices; the Moyale Road or Tanganyinka Road. Both are through desolate parts of the country that have been rejected by locals and tourists alike, and are considered to be very dangerous. If you don’t have a vehicle that can take the many punches that Africa’s off-roading is guaranteed to hand out, you have only one choice, the Moyale Road. And this is where your fate will be to hitch a ride on the back of a cattle truck. This was the one part of our Trans-African trip that our 150 cc would not be able to get us through, and even if the sandy roads and bandits weren’t an issue, we still wouldn’t have enough petrol to make it. Our fate was therefore sealed and we would have to make this journey the same way as all the other hitch-hikers.

Two days before our departure for Isiolo, a town in the Eastern Province of Kenya, we had some fun with the bike, giving it to a school for disabled children for the day and allowing them to paint it. The result was a mess of wet paint sticking to everything. The bike looked ridiculous to say the least and we knew the dust from the road ahead would cling to the still semi-wet paint and add to the chaos of colours.

We departed from the foothills of Mount Kenya early in the morning, hoping to find a lift and get going as soon as possible. After 12 hours of bargaining and waiting we are finally on our way.

Within a few hours, the sweltering desert sun has obliterated the final reserves of my patience! My face and neck are plastered in mud from the sand that has mixed with the buckets of sweat dripping off me under the pieces of cloths used to keep the dust out of my lungs.

I stand up, rip off the cloths and climb onto the cattle truck’s top bars, holding on for dear life and coughing out a few grams of sand I had inhaled, the price for this temporary relief. However, I am no match against the force of the corrugated road and am repeatedly shot into the air, my poor ass receiving a solid beating each time it collides with the truck. At least I can wipe some of the mud from my face and enjoy the wind as it sweeps through my sweat-drenched doormat - what I would normally refer to as hair in other circumstances. With each kilometre my discomfort grows, so my strategy is to milk each position until it becomes too painful and unbearable and then rotate to the next position. Thus, the journey became one of savouring the pure bliss of relieving one part of my body by sacrificing another part to the unending torture.

A leathered old man carrying an ancient rifle is also seated on the truck's roof. He is still awake. Good. I am not exactly sure what I would do if we came under attack, as I see him more as a small decoy as opposed to an active force or saviour in my so-called escape plan. I can only hold on and hope, because after discomfort security is the other big thing on my mind. Before starting this trip I was confronted by a few disapproving individuals on this issue. “What the hell are you thinking by taking your wife into deep, dark Africa where it is fraught with danger?” The justification was simple, she wanted to go. In fact, it was Dorette who had proposed the idea for our honeymoon on the night we got engaged. Sure, heading north into certain isolated and dangerous parts of Africa isn’t your typical honeymoon destination, but to us disappearing into the Dark Continent to see what we would find was everything we’d ever dreamed of!

So here we are, in the riskiest stretch of our journey. The war declared in Sudan and ongoing Egyptian revolution is, in my eyes, a piece of cake compared to this stretch of isolated landscape. The irony is that if we had travel insurance we would be covered on this road and not in Sudan or Egypt! But we aren’t insured, as we had taken out insurance for the first three months of our journey and decided to save the rest of the money. Sitting on the truck I knew it was money well saved because if something did happen no one would ever find us in these parts anyway.

By this stage my backside is only a few minutes away from having had enough and I am getting dizzy from the afternoon sun. I look down and catch sight of Dorette huddled in the corner, her slim shoulders slamming against the dung-covered sides of the truck as her petite body is tossed around like a rag doll. Dynamite certainly does come in small packages I think, my sympathy and admiration for Dorette growing by the minute. My poor, brave wife, she's gone through so much discomfort and difficulties over the last few months, all for her honeymoon! Prior to our trip, I had been told about various ‘disaster’ honeymoon stories and the words now reverberated in my head; newlywed brides complaining about the choice of location, activities, and even the class of the hotel arranged by their husbands for their honeymoons. Complaints that it was not an overseas trip, the hotel not expensive enough, it was too short. I could picture a well-manicured, designer-dressed woman moaning to her friends over a glass of wine, and then I imagined her in Dorette’s position. The look of disgust on the woman’s mud-caked face and her mud-filled wine glass is too much for me and I burst out laughing.

My ass is now well and truly done, and my perseverance long gone. I struggle back down to the floor of the truck, my body exhausted and bruised. I find a place next to Dorette and the khat-eating locals. Khat, which is also known as miraa in this area, is a flowering plant eaten by locals that is said to cause excitement, loss of appetite and euphoria (it gets you high as a kite). They have to chew the leaves and twigs of the plant, and it can take hours before the drug actually hits. All around us are men and women with big balls in their cheeks and twigs in their teeth, and green spit dribbling out of their mouths as they get higher and higher. It is an interesting and, as night falls, terrifying picture. We have only covered a quarter of the way and already I am fed up! I place my hand on Dorette’s leg in an attempt to provide a teensy bit of comfort, my heart consumed with sympathy for my lovely wife. She reaches for my hand and turns to me, screaming to make herself heard above the truck and clanging of metal all around us, “This is quite uncomfortable, but hell, now we are really travelling!” Yip, that's my girl!

We finally arrive in the town of Moyale, at the end of the Moyale Road, 511 km and 36 hours later, exhausted and battered, but elated that we have made it through safely. The bike, which had been placed on top of the bus for the first half of the journey and then transferred to the back of the cattle truck for the second half, has taken a beating too, but there's nothing we can't fix. Moyale is a border town that is divided in two by a Kenyan side and an Ethiopian side, so we spend the night on the Kenyan side. Early the next morning we cross into Ethiopia and head for Addis Ababa, 766 km away. It took us three full days to get there, but that's a whole other story for another time.