Three families, three oar rafts, seven days and one Orange; this was our basic recipe for the chillest trip ever. The rain gods had different plans though; 1,300 cumecs of water racing down the Orange River is not what I had in mind when the trip was planned. Plan B; hit the Vaal! 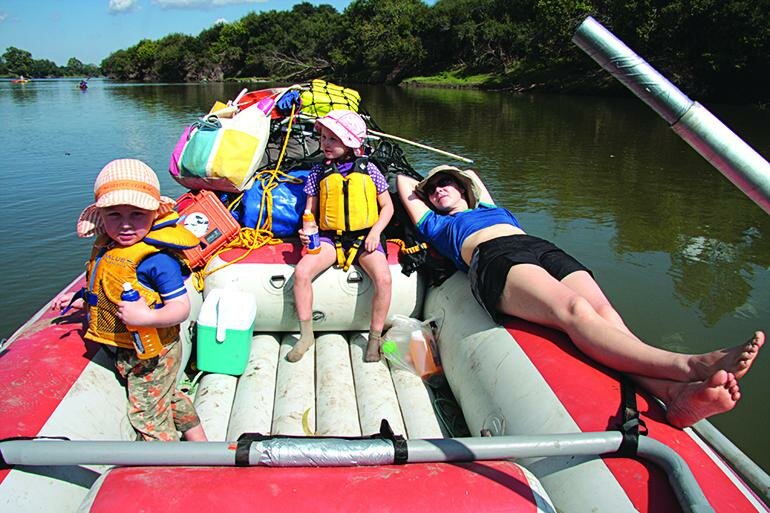 I hear the naysayers saying nay, the Vaal is boring, a substandard substitute for the real thing. Rest assured that your mighty river warriors haven’t lost the plot and I’ll let you in on a little secret: oar rafting on easy rivers is the next big thing. It is all about living the good life and sharing it with your loved ones. Read on for the details.

The theme is all too common. Guy starts paddling, guy paddles every weekend, guy meets girl, guy gets married, wife gets pregnant, guy stops paddling, guy wishes he could still paddle but doesn’t dare raise the subject. The problem with kayaking and most other outdoor or extreme sports is that they are inherently selfish pursuits, and quite often male dominated. If you are a member of the sub culture and your better half isn’t absorbed in her own passion, you are bound to cut into your river time or risk the consequences.

There is an answer to this dilemma though. Share the good times and gain some brownie points, and you will be surprised by just how much fun it can be. All you need is a good raft, an oar rig and some river savvy. Be prepared for a good physical workout while your family is having a relaxing time, but they will thank you in many ways, guaranteed!

The ultimate river in South Africa for easy multiday trips is the Orange, but it’s a long drive unless you live in Kakamas or Springbok. If you live in Gauteng and have little time, the good old Vaal River hides a beautiful, little known section just below Parys. Forget about Big Daddy and Gatsien, I’m talking about a section even further downstream. 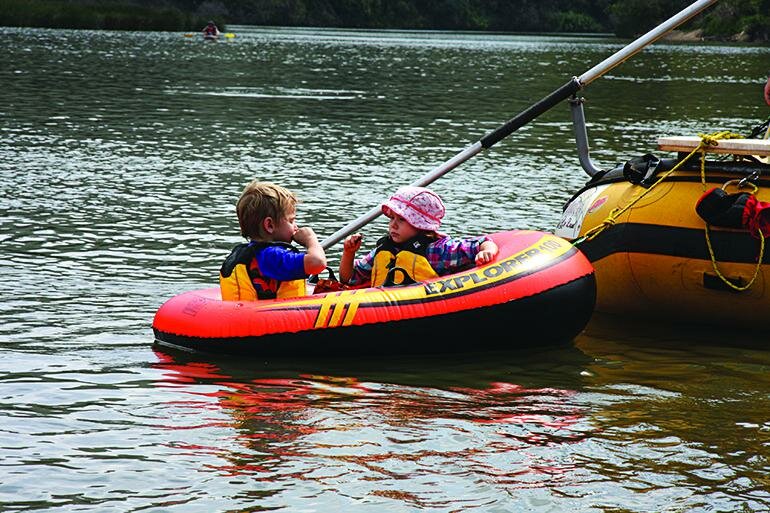 The waters of the Vaal carved some big curves through the beautiful koppies of the Vredefort Dome, the remnant of an impact crater created millions of years ago (or less than 6,000 years ago if you ask some local yokels in Parys). A few very small rapids and wide channels between islands add some excitement, but the real draw of this section of river is the peacefulness. To tell you the truth, I paddled this section once before in 1994 and vowed never to return. All I wanted was rapids, and rapids were not to be found here. However, 17 years later I couldn’t think of a better section to take my kids on for an enjoyable two-day trip.

We gathered at Vaal de Sioleh, a resort on the dirt road between Parys and Venterskroon, early Saturday morning and there was not a cloud to be seen. A variety of river craft assembled in loose formation as we prepared for our river launch. Our party of three families, with three oar rafts, were joined by relatives on our mini expedition.

By South African standards I’m a veteran of oar rafting, but my two friends, Jacques Holtzhausen and Andries Meyer, have never captained an oar raft before. In fact Jacques is not even a paddler, while Andries stopped kayaking a couple of years ago. Brand new oar rigs were made just in time for the trip, and this would be Jacques and Andries’ baptism of fire. A raft loaded with two adults, two kids, gear and enough food to feed an army can be a pig to manoeuvre if you don’t know what you’re doing.

A light breeze greeted us as we pushed into the river. Simple instructions followed on the art of oar rafting. Backwards, forwards, turn left, turn right. If you forget everything else, remember that the back ferry is king in a rapid. While I shouted instructions and demonstrated various techniques, the kids were already making themselves all too comfortable on the rafts. One thing is certain: an inflated floating platform is heaven on earth for a little kid.

Soon enough a small rapid appeared in the distance. Andries and Jacques were already getting familiar with the oars, and we floated effortlessly through the rapid. Some beautiful vistas and small islands followed, then the noise of an approaching rapid became audible. I rowed closer for a proper scout. The rapid was certainly bigger than the first rapid, with some tight manoeuvring required to prevent getting stuck. I ran the rapid first to show the line and got my camera out. They followed, one at a time. It was hardly an acid test for my friends’ newfound skills, but both managed to get through the rapid safely despite some humorous interaction with a rock or two.

Perfect weather, long swims and general relaxation rounded off a great day on the water. We found a suitable site on the riverbank to make camp for the night. Tents pitched, it didn’t take long for us adults to get comfy around the campfire and reflect on what was achieved during the day. By adding Jacques and Andries to the clan, the number of oar rafters in the country was almost doubled. Yes, that’s right. The art is still in its infancy. For the past few years, there were literally only three or four of us river people piloting oar rafts down the veins of our country.

Taking an oar raft through serious rapids requires considerable skill and a lot of river time. I doubt that the extreme side of the sport will grow much in South Africa, but I can see a bright future for family-orientated oar rafting trips on easy river sections. Our short two-day excursion down the Vaal proved how accessible and fun it is to non-paddlers. The wives loved it and the kids were having the best time ever. When they were not swimming or messing around on the boats, the kids were exploring the camp’s surroundings, tried their hand at fishing, practised kleilat gooi and generally made a nuisance of themselves like healthy kids do.

Our second and final day on the river was a repetition of the first day. Except for the wind. Indeed, on a river trip like this you experience the natural elements first hand. But being the brave captain of your own raft, with your kids cheering you on, a blister or two is taken in your stride.

Best time of year to go is September to April.