A Glimpse into Ethiopia

Having made it through the Moyale route in northern Kenya, the long and rough ride in a cattle truck, in bandit country, turned out to be two of Guillaume, my husband, and my favourite days out of the 153 we spent driving through Africa on our 150 cc delivery bike. Ethiopia, Sudan and Egypt were the only three countries left, and we were going to dash through them like lightning - or so we thought. 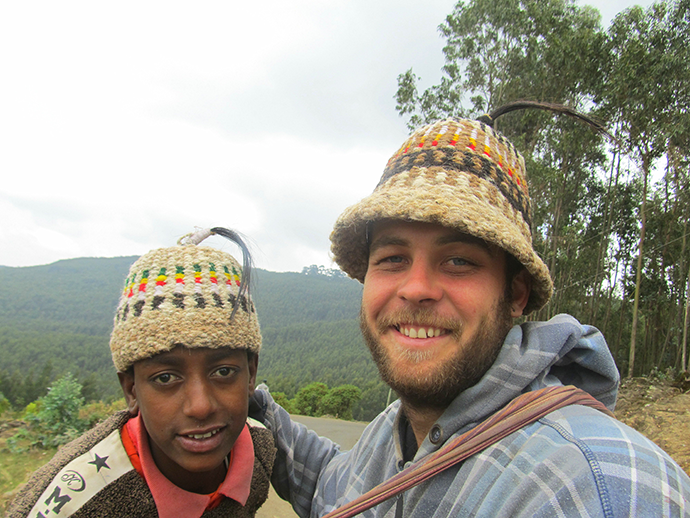 The first part of our dashing was to be done in Ethiopia, a country we are familiar with as we had been there on a quick visit a year ago. This was to be followed by a couple of days in Sudan, just a ‘transit country’, before heading to Egypt, the end of the line. We thought we were in the clear as soon as we got off the truck in the town of Moyale, situated on the border between Kenya and Ethiopia. It’s funny though how things are never quite what they seem, because as soon as you think you have figured it out, you realise that you actually have no idea.

As with all the countries that came before and the two that followed, our entry into Ethiopia was filled with euphoria; as we never thought we would make it this far up the continent on our bike and so every border crossing was a personal achievement. The smell of injerra (the national dish of Ethiopia and an acquired taste) and home-brewed gin served in jerry cans, mixed with the scent of open fires and coffee brewing, was just the warm kind of welcome we needed after the dust of Moyale. In all honesty, we were looking forward to the many delights that Ethiopia has to offer, including the low-cost local gin, its friendly people and cheap lifestyle. However, injerra is definitely the one thing we don’t ever want to see again! Ethiopians love injerra! Not only is it their staple food, but it looks as though this yeasty, flat bread is the only food available in this country. The runny dough is made from teff and left in the sun for days to ferment, to give it an unusual taste and texture, before it is made in much the same way we would make pancakes. Once you have had it for breakfast, dinner and lunch for a couple of days in a row, you’ll never want to eat it again, trust me!

Apart from the horrid meals, we absolutely adored Ethiopia. Everything about this little land-locked country on the Horn of Africa is unique. The way they dress, the ancient orthodox churches, the coffee rituals (where they brew coffee on coals, burn incense and then serve it with popcorn) and the rich history and traditions preserved by a proud nation that was never really colonialised, distinguishes it from all the other countries on the continent we’ve seen. Ethiopia is a special place, but it's mostly associated with the great famine from 1983 to 1985. It was a horrific time that led to more than 400,000 deaths. Thankfully, this has long passed and there is so much more to be seen than starving children and dead cattle. Places of interest include Lalibela, famous for its monolithic rock-cut churches, the picturesque ruins in Gonder or Lake Tana, the origin of the Blue Nile. If you just dig a little, you will find a thousand things to love about Ethiopia.

For us it was the small things that made our time here so amazing and interesting. For example, in 2012 it was only the year 2005 in Ethiopia because they have their own calendar with 13 months! When deep in conversation, in Amharic, one of their main languages, you don’t nod to indicate that you are still listening or agreeing with what the person is saying, instead you take a deep, hissing breath. A simple short inhalation is enough to show you understand. When greeting someone, you don’t shake hands or hug, but rather take hold of the person’s right hand and bump right shoulders. There are so many fantastic, unique customs hidden away in this small country, which is seldom seen on a map of ‘places to see in this world’.

One of the things we loved most about Ethiopia was the roads! The main artery was only built a couple of years ago, and if you stick to it you can easily drive from the southern-most tip to the border of Sudan without fear of encountering a single dirt road; a big fear of ours, as our small tyres and overloaded bike could not really handle any more off-roading.

But as Murphy would have it, our smooth sailing on the new roads ended when we hit a rock the size of a golf ball at full speed. To the left we could see them; a group of young children laughing at us. As any traveller will know, as soon as you have one situation sorted out another often rears its ugly head. In Ethiopia, the irritation of bad roads was replaced by the tradition of throwing stones at the vehicles of ferengis (foreigners). A dangerous pastime, but loads of fun for the local kids.

But by this stage, we weren’t unprepared. Way back in Kenya (and by way back I mean 700 km and five days ago) we found an old police siren at a second-hand market and installed it on the bike. Of the numerous things that Ethiopians are famous for, one is for being very fast runners. In total, we had stones (and one plastic water bottle) thrown at us nine times, and on those nine occasions we can confirm that Ethiopians are indeed very, very fast runners. By the second ‘whoop’ of our police siren, and before we could turn the bike around, the dry countryside landscape would have one small dust cloud kicked up by the stone-throwing children, with not a soul in sight. We managed to dodge the most dangerous stones thrown at us, but soon learnt that the blistering heat and dust of the Moyale Road were but a holiday in comparison to the icy, cold rain in Ethiopia. In the highlands, the temperature drops quite radically and in the rainy season you need to be equipped to deal with this change. As always, we weren’t.

During our time here, we didn’t just come across fast and mischievous Ethiopians, we also met generous and kind-hearted one’s too - traits that cross all language barriers. On the iciest day, when we couldn’t see 20 m in front of us due to pouring rain and thick mist, were soaked to the bone and shaking uncontrollably from the cold, we found refuge amongst some Amharic-speaking locals in a small mud hut. Without a word they offered us their tiny coffee-making fire to warm up, plastic bags to keep our hands dry and a shot (or two) of that tasty gin for courage.

With a not so simple amaseganallo (thank you in Amharic), we braved the rain again and eventually, but not without more hiccups, made it to the border of Sudan. Here we were once again greeted by the overpowering heat of the desert we so longed for, and would soon come to loathe. The Sudanese are not less interesting, kind or generous than the Ethiopians, but it is a ‘dry country’ (no alcohol sold at all) and on our extended dash through here, we often longed for that courageous Ethiopian gin - but never the injerra!

Travelling tips - Ethiopia:
• Visas aren’t easy to obtain, so be prepared with all the documentation. You can apply at the Ethiopian High Commission in Pretoria or upon arrival at Bole International Airport in Addis Ababa. Note to overlanders: you can't obtain a visa at the borders or in neighbouring countries, so plan for this.
• In general, we found Ethiopians to be very honest people, but take care of pickpockets in the capital and other big towns. Also, don’t take any prized possessions to the Merkato, a large open-air market in Addis Ababa and a must see, as it is known for its pickpockets. And when taking local minibus taxis, keep an eye on your wallet - we found that it disappears quite quickly!
• Public transport often results in a rough ride, but this makes the journey interesting. For those set on comfort, rent a vehicle and/or arrange for a tour guide to take you around.
• There are often issues close to the border with Eritrea and there have been attacks on travellers in this area. So check with your embassy or keep an eye on the news before travelling to this part of the country.
• When driving, be careful as livestock roam the roads, including all main ‘highways’.
• Ask before you buy, eat or drink anything. Just like many other African countries, a traveller is sometimes seen as a quick buck. When enjoying the more rural areas, settle the price of anything you buy (even food and drinks) before taking it. It is not uncommon to enjoy a meal and then find yourself saddled with an unreasonable bill afterwards.
• You can often bargain the price of accommodation down, especially out of season.
• If you want to witness Timkat, the fascinating Ethiopian Orthodox celebration of Epiphany, it is celebrated on January 19 (or 20 on their Leap Year).