Having had the privilege of diving around the world, Laura and I keep a running scorecard of our top five dive sites. These obviously can change depending on our mood, our most recent holiday or time of the year. It is interesting to note that no matter where we dived last, the time of year, water temperature or what the currents were like, the east coast of Africa always features. In August this year Laura and I ventured north east, for our first experience of the renowned Manta Coast of Mozambique. 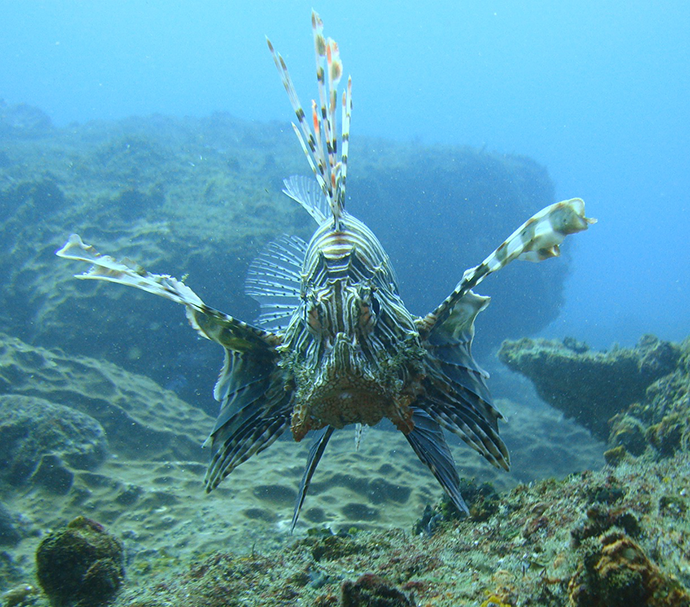 We left Johannesburg after work and made short work of the trip to the border, where we spent the night. The next day’s torturous trip had us arrive at our destination 11 hours after setting out, which included two hours at the border and yo-yoing between the speed limits of 100 kph and 60 kph every couple of kilometres. More frustrating than the yo-yo driving was being pulled over by the Mozambique traffic police for doing 68 kph in a 60 zone - I was not impressed! All said and done, when Laura and I finally arrived at our destination of Jeff’s Palm Beach Resort, in Guinjata Bay, we were exhausted, but extremely excited. We did not even unpack the car before heading down to the restaurant to grab a cold beer, a little 'R&R', and book a dive for the next morning.

When morning arrived we were treated to the magnificent setting of the lodge we were staying at. The palm-leaf thatched roofs of the bungalows peppered the dune, while the restaurant and dive shop sat right on the beach, boasting an 180-degree view of the coastline. The day was perfect, the sea magnificent, and there was not a breath of wind. Our dive was at the famed Manta Reef, and no sooner had we hit the water than the magic began. The topography and fish life was outstanding and Laura had a great opportunity to get a big sloppy kiss from a potato bass almost as big her. Next a beautiful honeycomb moray darted from its hiding place in the coral and elegantly glided to the safety of a massive plate coral, just centimetres from where we watched. The reef lived up to its name and everything else became a lot less attractive as the first of five giant oceanic manta’s glided overhead and into the cleaning station. The remainder of the dive was spent just enjoying the majesty of the world’s largest rays as they circled. The excitement on the boat after the dive was epic, and we agreed that the holiday couldn't have gotten off to a better start.

Laura and I decided not to do a second dive that day, despite the excellent conditions, and rather joined an afternoon sea safari. Typically divers view sea safaris in a rather negative light, as why would you spend that amount of time on top of the water when you could be diving? But because the day was just so perfect, the thought of a two-hour cruise up and down the coast sounded brilliant, regardless of the ‘safari’ aspect. Needless to say the ‘safari’ part was not something to be taken lightly as the afternoon started off with a quick swim amongst a pod of very playful dolphins. When the dolphins tired of us we hopped back into the boat and continued down the coast, only to be treated to two humpback whales playing in the shallows off Paindane Beach. Laura and I were the first in the water and watched these magnificent creatures lolling in the water - and nearly got ourselves killed as one of them slapped its massive tail down just metres from us. This was our first-ever experience with humpback whales and we were so close that I couldn’t get a decent photo - and you could not wipe the smile from our faces.

Content that the day could not get any better we lay on the pontoon of the rubber duck and enjoyed the warm spring sun. This didn’t last long as our attention was quickly diverted to a massive greenback turtle swimming alongside the boat. Finally, but rather reluctantly, the skipper turned for home with a crew of very excited passengers. He headed for the backline and was almost immediately rewarded with the first of two whale shark sightings. We got into the water as quickly as possible and once again experienced one of the ocean’s wonders at impossibly close quarters.

So with the ocean's ‘big five’ done and dusted, all in a single day, Laura and I were possibly the happiest people on earth and excited to see what the rest of the holiday could offer.

Unfortunately those stellar days are one in a million and the weather turned in the night to present us with a wild sea and turbulent wind for the morning of our second day. The remaining three days at Guinjata Bay were lovely despite the poor weather and lack of diving, and the friendly people we met at the lodge provided for lively conversation and great stories of diving around the world.

The next stop on our Manta Coast extravaganza was further south, at a more remote location called Zavora. Here African time takes on a new meaning, and is where an 08h30 dive is likely to only launch at 10h00. This is not a show-stopper though, as the people are friendly and the focus is on diving, with each outing consisting of a deep dive to around 30 metres and then a shallower dive at about 15 metres. Unfortunately, the weather did not improve dramatically so the surge was fairly strong and the visibility not fantastic.

With the ‘negatives’ out the way, I can honestly say that the dive sites at Zavora are some of the most beautiful I have ever dived. The underwater landscapes were varied and interesting, with coral gullies and rocky swim throughs, massive boulders, and complex coral diversity. The topography was really something to behold, and in better visibility holds the promise of millions of hidden secrets. Some of these secrets did show themselves and we were lucky enough to see some beautiful paperfish, a variety of brightly coloured nudibraches, of which one was the massively impressive Spanish dancer. Large potato bass and schools of kingfish augmented the variety of eels and colourful butterflyfish. These magnificent reefs were teaming with life, which made them truly memorable, but what made them exceptional and puts them into my top five (for the moment anyway) dive sites is that these reefs are prolific cleaning stations and of the six dives we did in Zavora we saw mantas on four and eagle rays on one - not bad for the Manta Coast.

So once again, after an experience to rival the best of Australia, Egypt, Indonesia, and Borneo, the Manta Coast really is part of a wonderful world.

• The Manta Coast is great all-year round. Typically manta and whale shark sightings are better in the summer months, although a shift about two years ago has seen more and more mantas frequenting the reefs during the cooler months. Humpback whales frequent the area between June and October.
• The rainy season is typically between November and February.
• Manta Reef is accessible from Guinjata Bay, Coconut Bay, and the more famous Barra Lodge.
• I recommend an advanced qualification, as the currents and surge can prove tricky if you are unsure of how to handle yourself in those conditions.
• For diving in Guinjata Bay contact Johan or Mauritza at Jeff’s Palm Resort - or
www.jeffsmoz.com/diving.
• For diving in Zavora contact John at
Moz divers - http://mozdivers.com/.
• Technical diving and training is available from Zavora, as the dive school is an IANTD school.
• A 'R&R' is a Rum and Raspberry drink made from local rum and Sparberry.