Namibia from Orange to Kunene: A Technicolour Dreamscape, Part 2

In the last issue, my friends and I left Gauteng for Walvis Bay on a 4 x 4 adventure of note. Our journey saw us drive along the sandy tracks of the Orange River, take in the sights of the beautiful Fish River Canyon, watch magnificent wild horses roam the endless plains in Aus, explore the celebrated ghost town of Kolmansdorp, relish in the most amazing apple pie in Solitaire and conquer two beautiful passes; the Gaub and Kuseb, before reaching Swakopmund. The second part of this trip takes us to our final destination, the mighty Kuene River. 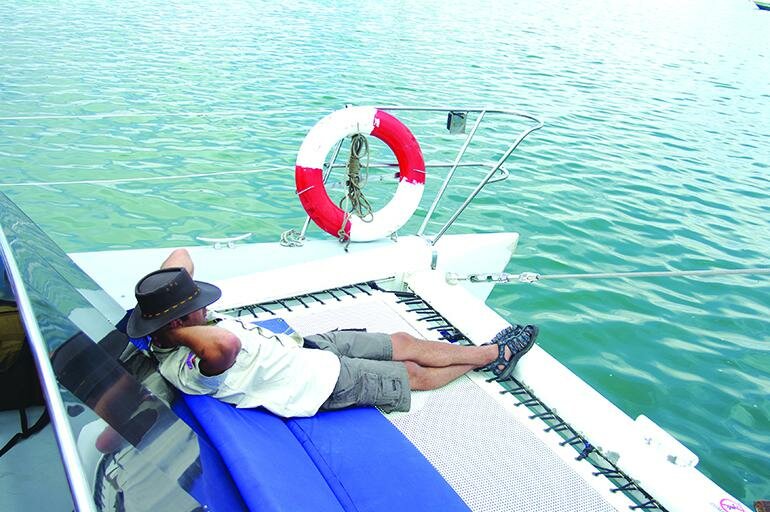 For the last few days in Swakopmund we’d had awesome weather, so we booked a morning out on a catamaran to Pelican Point. On our way to Walvis Bay Harbour clouds started moving in from over the sea, but it didn’t look like it would rain and we boarded the boat as planned.

A seal joined us on the boat just minutes after we left dry land and was rewarded with fish from the captain. Seconds later, pelicans and seagulls started circling above to get their share too. Pelicans are amazing birds; they measure between 140cm and 178cm long, have a wing span of approximately three metres wide and weigh around nine kilogrammes. It was incredible to see how a bird of this size is able to catch fish in mid-air, turn it around so that the head goes first into its gullet and is devoured in a flash, and all so effortlessly. Pelicans can eat fish up to hefty four kilogrammes!

The boat turned in the direction of Pelican Point, a narrow strip of sand and clay that juts into the sea in a northerly direction over a length of about nine kilometres. It protects the bay from the Atlantic Ocean by forming a natural break water, making Walvis Bay Harbour one of the safest in the world. The lighthouse on Pelican Point was erected in 1915 and is 34 metres in height. It has an illuminating capacity of 16.3-million lumen, which is discernible from a distance of 19km. The island is also home to thousands of seals and has an abundance of bird life. On our way back we were fortunate to see Sunfish and were entertained by a few dolphins that frolicked and swam next to the boat for a while. Apart from experiencing nature at its best, we were treated like kings on the boat; the seafood we enjoyed for lunch was first class. The oysters were freshly harvested in the Walvis Bay Harbour, where conditions for oyster farming are the best in the world.

We left Swakopmund at 04:00 the next morning and drove towards Henties Bay, where we met Francois Flamengo and friends. Our time in Swakopmund was limited, so we eagerly set out to catch ourselves some Bronzies. Now, before you can even think of catching a Bronze shark you need bait, but not the kind of bait you can buy at your local shop. What we needed was some freshly caught Sand sharks. Just after 09:00 we had two in the bag and Leon, the fundi when it comes to catching Bronzies, had caught two a little earlier. With Francois’ help, I set up my rod with the massive hooks and steel cable needed to prevent the shark from cutting through the line when taking the bait, and threw the bait into the waves.

The waiting game had begun. Suddenly there was tension on my line. I held on, but Leon thought I had lost it.

However, just seconds later, the shark ran with the line and the fight was on. Only a few minutes had passed and already my arms were taking strain. “Hey boet, this is just the beginning so prepare yourself for another hour of fighting,” came the not-so-soothing words from Leon, but the truth. An hour-and-a-half later, I was lucky enough to bring a massive 82kg Bronzie ashore. She was measured, weighed and tagged on shore before being released back into the ocean. My thanks to Leon and Francois for making this awesome experience possible.

After spending the day on the beach at Vlotskasbaken, with my good friends Johan and Leonie Swanepoel from Mondjila Adventures and their family, it was time to leave Swakopmund behind and complete the journey.

On our way to Ongongo, we drove through the Skeleton Coast and spent some time at Torra Bay, where fishing is the main past time. The Skeleton Coast Park is a slender (40km at its widest) 600km strip of sand, gravel, jagged ravines, dolerite dykes and some of the world’s most desolated shores. The park stretches from the Ugab River in the south, to the Kunene River and Angolan border in the north. Although the Skeleton Coast may appear barren at first sight, it has a variety of fauna and flora that has radically adapted and is often unique to this unforgiving environment. Here, you will also find elephant, Black rhino, Mountain zebra, giraffe, lion, cheetah, jackal and a variety of buck.

We reached Ongongo in the late afternoon, a real oasis in this barren terrain. Even during the driest times there is always water in the natural pool to cool off in after a long day of hard driving. Driving on the gravel roads in this area requires a lot of concentration, so a swim was most welcome.

Our next stop was Epupa Falls via Opuwa. The gravel roads were in good condition and driving was a pleasure. We refuelled in Opuwa as this was to be the last refuelling point for the next five days. We reached our campsite late in the afternoon and set up camp under the huge Makalani palms that frame the banks of the Kunene River. The next morning we took a walk to the falls, where the view was simply breathtaking, then cooled off with a swim in the pools next to the falls.

Braaing in the rain is quite a challenge, but is what makes life a little more interesting and something not easily forgotten on overland trips like these. The next morning we packed up our wet tents and headed out again. 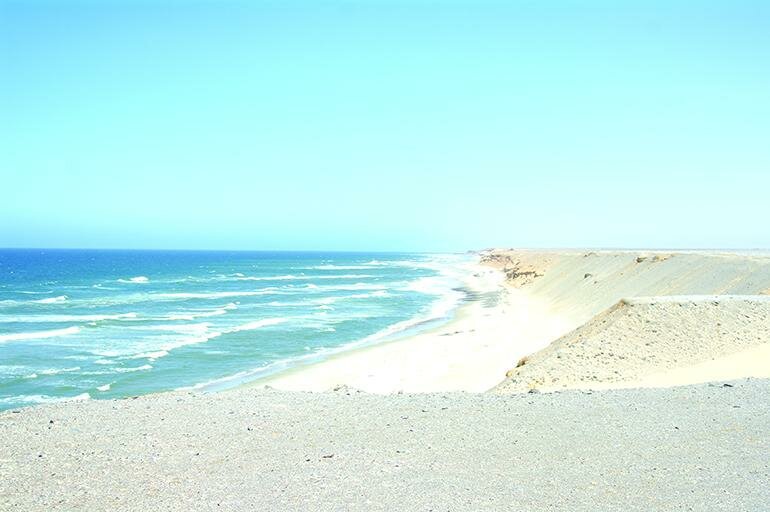 The next 76km to the Kunene River Lodge is not a road, it’s an off-road track where low range is often required. One of the benefits of having to travel so slowly is that you can really appreciate the fantastic plant and bird life along the river. This area is known for its Commiphoras. My favourite is the Purple-stemmed Corked Wood (commiphora multijuga), which is indigenous to the area. The twigs and leaves are very aromatic, and in the Kaokoland the fragrant resin omuzumba, which means fragrant, is blended with fat as a perfume for the body.

From Epupa we travelled 54km to the big old Fig tree at Enyandi. As it was only 14:00, we decided not to pitch camp there and rather push on. However, about two kilometres from the tree we found the river in full flood and two bikers and a family of four from France waiting patiently for the river level to subside. Africa is not for sissies, so Gerald, Carel and I walked through the river and then decided to drive through. Gerald went first, but got stuck about halfway through. After an half an hour of winching, he reached the other side safely. With a recovery vehicle anchored on the opposite side of the river we were ready to get all the vehicles across, including those of our stranded fellow travellers. This was definitely the highlight of the day for the local Himba onlookers, who took great pleasure in watching us battle this raging river.

Later that day, we set up camp on the bank of the Kunene River under two large Ana trees, and were joined by our fellow travellers for a braai. The rain came down once again, but this time we were prepared and had Carel’s awning set up before the downpour. Waking up in the bush after it has rained the whole night is one of those simple pleasures in life; the smell of the earth and the foliage glistening in the sunlight hits home just how privileged we are to live in Africa.

Back on the road again, we continued to Kunene River Lodge where the views from the track, as it wound alongside the river, were picture perfect.

We were warmly welcomed by Pete from the lodge, whom we had stayed with previously during a glass clean up project in the area. As usual he knew exactly where to find the Cinderella Waxbill and Grey Kestrel, two endemic birds to the area, and pointed us in the right direction. After four years of visiting the area, I eventually managed to see the Grey Kestrel, an awesome sighting for any birder! We spent two glorious days exploring the area, a birder’s paradise. On the morning before we left, Anina and I decided to raft the mighty Kunene. The river’s level was quite high due to the good rains in Angola and this gave new meaning to the term ‘white water rafting’. Apart from the adrenalin rush through the rapids, the whole trip was a fantastic experience. Some of the oldest rock formations in Namibia can be found on this stretch of river, and we were very pleased not to encounter any crocs, as they apparently don’t like fast running water. Lucky for us!

We met up with the rest of the convoy at Hobatere’s campsite, close to Etosha’s border, for our last night of camping. Here we were treated to a sighting of another endemic bird to the area, the Hartlaubs Francolin.

The Waterberg Plateau was our last stop in Namibia and we spent the night in chalets. The next morning we left at 05:00 to get across the border into Botswana and proceeded towards home.

It had rained the whole night and made driving on the gravel roads very difficult and dangerous, especially if you don’t know what you are doing. So we set out in high range 4 x 4, as it would give us more control over the vehicles. This stretch of road was definitely a highlight for the drivers – ‘heeltyd speel tyd’.

It is always sad to leave Namibia, but the memories of this incredible trip will long live on.

The Ovahimba, on offshoot of the much larger Herero group, are semi-nomadic pastoralists who subsist on the milk of goats and cattle and the hardy plants of an ungenerous land. Their homes are simple and easy dismantled structures of saplings bound together using the leaves of the Makalani palm and sealed with dung.