The dry and dusty Makgadikgadi Pans of Botswana are one of the most inhospitable yet beautiful places on earth. So why would anybody want to drive there in a Mercedes-Benz ML500 4MATIC and then cycle 150 km across them? Patrick Cruywagen searches for the answers. 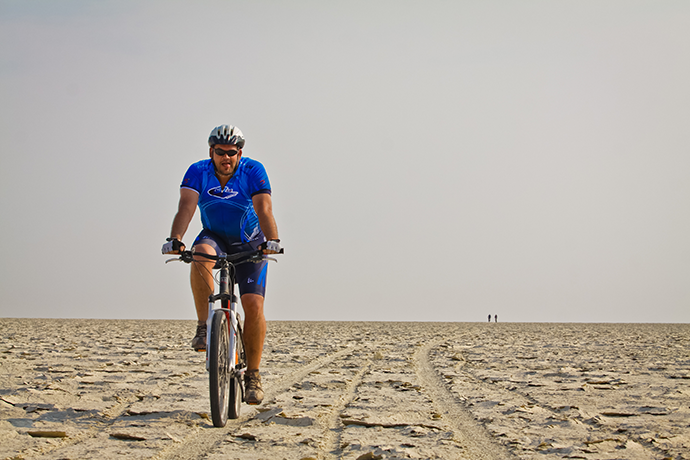 It is a roasting 40°C outside, but inside the cabin of my ML it is like London on a summer’s day; nice and cool, thanks to one of the most sophisticated climate control systems ever fitted to a vehicle. The ML is fully laden with four adults and three mountain bikes, and we are towing an Echo Roadster trailer, with all our camping gear in it. Behind us in a Land Rover Defender (kindly provided by Land Rover Centurion) is Jonty Rhodes, my mate and former South African cricket player, and his partner, Caroline McClelland.

Our mission in Botswana is simple; we want to become the first people to cycle across the Makgadikgadi Pans. But first I need to hand over my gate pass to the guard on the Botswana side of the Martin's Drift border post. I pray to the travelling gods that he doesn't ask to search my vehicle and trailer, not because we are carrying anything illegal, but rather because of the inconvenience of having to leave my perfectly ventilated seat. He waves us on, even though his eyes have that 'don’t you have an ice cold coke for me' look. He obviously didn't see our ARB fridge in the boot. We are in, and our Great Makgadikgadi Pans Mountain Bike Adventure is about to begin.

When I towed for the first time, my mentor told me to drive as if there was nothing behind me. Now with over 300 kW of power and 600 Nm of torque at my disposal, delivered courtesy of one of the finest V8 engines around, I constantly find myself switching on the rear camera just to make sure the trailer is still there. Jonty is struggling to keep up in his Defender Puma, but once we hit the pans the playing fields will be levelled. I have to admit that I am a little nervous, as some of the other vehicles joining us include a Nissan Navara and the toast of Botswana; the Toyota Land Cruiser, and I am not sure how the ML will handle the rough stuff.

Botswana is one of my most favourite places on earth, the only problem is that hundreds and thousands of other people also feel that way. This explains why, when taking a boat trip on the Chobe River or camping at that famous Khwai River community campsite, you will almost always find yourself surrounded by many other like-minded travellers.

So when deciding to host a MTB ride in Botswana, myself and event partner Oom Ben Moller, the owner of Elephant Sands Lodge, knew that we had to come up with something rather special. We also knew there's only one place in Botswana where you can see the curvature of the earth and that's the 12,000 km² Makgadikgadi Pans. They are so vast yet 4x4 vehicles can only drive around the edges, even when at their driest. The reason is that just below the crusty, white surface of the pan is black, vehicle-stopping mud. However, bicycles would be able to cross provided the pans are not filled with water.

Our plan for the MTB ride is simple. We will first do a north to south crossing of Sowa Pan, sleep at Kubu Island, then ride along the ridgeline between Sowa and Ntwetwe Pans before doing a south to north crossing of Ntwetwe Pan. It is 150 km of mountain bike riding over three days, while the vehicles will have to drive around the pan's edges and meet us at the overnight spots.

We enter the pans just west of Nata, having turned south off the A3, and soon trees and people are a thing of the past. For most this is their first visit, so we stop for an impromptu photo session and celebratory drink. We have made it here, but will we survive the adventure?

Choosing a camp spot is difficult because you want to stay on the dry edges of the pan, but still have the feeling of being surrounded by it. This is where local knowledge comes in and we were fortunate to have Pierre van der Bol with us, probably one of the most knowledgeable people on the pans. Pierre has explored almost every inch of them in his lightweight beach buggy, and will be leading the cyclists across the pans. Oom Ben misjudges the surface of the pan near our campsite and before you can say 'Jagermeister', his Land Cruiser has sunk into the mud. I unhook my trailer and go to help him.

My ML500 is equipped with a R23 000 on and off-road package, and now we are going to need it. Basically this means the centre diff-lock is 100% lockable, it has low range and special undercarriage protection plates. In addition, it has special off-road algorithms for the ABS, ETS, ESP® and air suspension. I push the necessary centre console buttons and the animation on the command display confirms we are ready to go. For R23 000 you don’t get a snatch strap, so I borrow one and with hardly any effort I pull the Cruiser out. In Ben’s defence, the marie biscuit tyres are not ideal for the pans, though all the locals use them in the bush. For good measure we recover Ben’s trailer too. The ML has passed the first tough off-road test.

The first day's ride is just under 50 km long and a straight line towards Kubu Island. After a hearty bacon and egg brekkie, the riders start at 7 a.m. while the vehicles take the long way round. As I am cycling, I reluctantly hand Oom Ben the keys to my ML and after giving him a quick lesson on how to drive we are off. The one advantage of riding is that you don’t have to break up camp. But who would get to Kubu first, the bikes or the vehicles?

Despite the starkness of the landscape, the loneliness of the place and difficulty of the changing sands of the pans, there is a sense of us all forging a new path. This is, as we often remind ourselves, the first time that an organised mountain bike trip has taken place across the famous pans. Even Jeremy Clarkson and his cronies from Top Gear featured the pans in one of their motoring adventures. But us mountain bikers … we are trail blazers.

The first couple of hours fly by, as they normally do on the first day of a ride, and we maintain a good average speed of around 15 km/h. Then for the first time we see Kubu Island, our overnight stop and a baobab-covered, rocky outcrop on the 12,000 km² Makgadikgadi Pans. The only problem is it isn’t getting any closer and seems to remain a distant haze, even though my GPS says it is only 10 km away. It has already been a long day and the crunchy, moon-like surface of the pans is beginning to claim its victims.

By now it is well over 40°C as we pass the bony remains of, what was once, a cow. George, an adventurer rather than a mountain biker, has had enough and decides to climb off his bike and walk, citing a sore butt. It is really just an excuse, but luckily our back-up quad is able to ferry him to the overnight stop. After much blood, sweat and gears we all reach Kubu, but the vehicles are nowhere to be seen, so we find some shade and wait. About an hour later, the ML appears, followed by the rest of the convoy. At 67 km this is the longest riding day and I decide there and then to start an hour earlier on day two. As we leave, the sun starts to rise over Kubu, a truly special experience.

After good summer rains, the pans fill with water and become a haven for bird life. Thousands of lesser and greater flamingos flock here to breed and at peak times can number over 100,000. So the only time one can cycle across the pans is towards the end of winter; when they’re dry and before the rains come.

Day two provides a challenge of a different kind; a ridge run between the two pans. And so the first 15 km is along a rutted, rocky and at times powdery ridgeline. On this occasion the weather gods smile upon us and provide ample cloud cover. To get to Ntwetwe Pan we cycle along a fence for 10 km before heading north and into a headwind. This time the vehicles did beat us to the campsite.

The ML is more than holding its own against some of the more established 4x4s in the convoy. However, when we take the road to Gweta for a quick shower after the second day's ride, a hidden rock tears into one of its sidewalls. A plug is not working, so we have to use a smaller spare, not ideal but we don’t have a choice. Fortunately when driving home via Francistown we manage to find a full-size spare at Hi-Q, even though it is Independence Day. In hindsight, I should have bought a full-sized spare along.

The northern part of Ntwetwe Pan forms a long, thin finger, just like ET’s. Where it hits the tar of the district road is where we finish our final day of biking - a 36 km ride on pure pan. Once again the surface varies continuously, so our average speed is around the 16 km/h mark. The cold and wind make things a little tougher, but before we know it the bikes and support vehicles are reunited. With our bikes loaded, we head to Elephant Sands, just north of Nata. We reflect on what had been an historic first crossing of the Sowa and Ntwetwe Pans, as we chug on a few beers and elephants play in the water hole just metres from us. We have shown that it is possible to mountain bike across the pans, while the ML has shown that it can ride along with the Cruisers and Defenders.

Accommodation
Elephant Sands lies about 50 km north of Nata, and is a very popular stopover for those heading towards Kasane or the Chobe National Park. They have a campsite, chalets, pool, bar and elephants. For more details see www.elephantssands.com or .

What we towed
The Echo Roadster was perfect for our needs, as we required loads of packing space for all our gear. In both on and off-road situations we barely felt the trailer. The nose cone provided a little extra packing room, while we loaded a makorro onto the galvanised top for the journey home! For more details see www.echo4x4.co.za.

Join the Great Makgadikgadi Pans Mountain Bike Adventure in 2013
If you would like to join us, visit www.makpans.com or contact Patrick Cruywagen on . The cost is R5 990 per rider and includes: meals, three nights on the pans and two nights in a chalet at Elephant Sands. The 2013 event will be held from 31 July to 3 August.