If there’s one company in this country that has been largely responsible for inspiring people to 'get up and go' whenever the urge hits them, it’s JurgensCi. Ever since 1952 when Geert ‘Oubaas’ Jurgens came to this country from Holland and made the caravan both affordable and very, very comfortable - even luxurious - South Africans have been packing up and heading out to our wide open spaces on a whim. 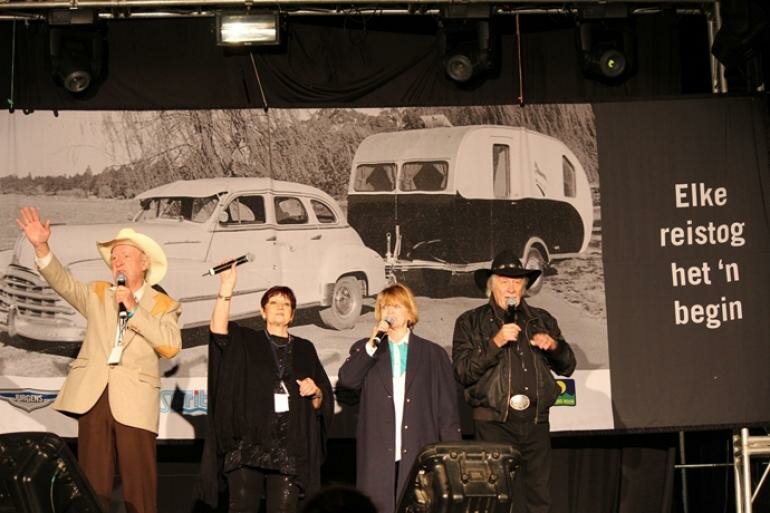 Now 60 years later, Jurgens Ci recently celebrated being ‘king of the great outdoors’ for all this time. And what a celebration it was! Almost 1,000 dealers, caravanners and their families, in nearly 300 caravans, came from all over the country to congregate at the Mpumalanga Badplaas Forever Resort in a 'Saamtrek'. From all accounts this is the biggest collection of caravans in South Africa’s history. Celebrations took place from 7 to 9 September 2012 - the weekend the spring rains decided to relieve the winter dryness.

Despite the rain, Friday evening saw caravanners and guests join Pieter Smith in a joyous sing along, while enjoying a glass of sherry and toasting marshmallows. The ambience created by old favourite songs and the warmth of the sherry set the tone for a festive evening and soon all sorts of caravanning stories were flowing freely.

The following day, Saturday, was a hive of activity with something for everyone, young and old alike. There were golf, tennis and bowls competitions, water sports, super tubes for the kids when they tired of the jumping castles, face painting and colouring-in competitions, with masses of prizes for anything and everything.

Golf provided the most serious challenge of the day when 14 stalwarts set off to conquer nine holes, cheered on by a gallery of eager supporters who responded enthusiastically later that evening as each winner received a sponsored prize.

Saturday night’s main event saw spectacular prizes being won, a sensational concert by many of South Africa’s top entertainers, and a wonderful atmosphere of joie de vivre that encouraged everyone to mix and form new friendships.

A culmination of competitions
Prior to Jurgens’ 60th birthday celebration, two magazines ran a joint competition with the winners being announced at the Saamtrek. Caravan & Outdoor Life and WegSleep each invited its readers to participate in a competition, the lure being the opportunity for each magazine’s winner to nab a fabulous Jurgens Expo caravan, worth R148 900!

To be eligible, entrants had to write about their own recent anniversary experience in the outdoors and upload it to ‘their’ magazine’s website, together with up to five pictures. Each magazine chose the writers of the five most creative stories as their finalists, who were then invited to the Saamtrek. During the main event, the overall winner from each magazine was announced. As you can imagine, the two winners were blown away when the magnitude of their prize sunk in and they started imagining all the great opportunities and experiences they were going to enjoy in their new Jurgens Expo caravans.

The excitement of prize-giving for all the competitions was matched by the performances of other celebrity entertainers (in addition to Pieter Smith), who really got the crowd going and enjoying themselves. These included: Bobby Angel, Thys die Bosveldklong, Lance James, Pieter Koen, Barbara Ray, Laurika Rauch, and Sally Vaughn.

You've got to hand it to Jurgens Ci for holding this type of celebration and not a glitzy-ritzy city affair. What could be more appropriate for their guests – all ardent caravanners – than to do it in their own style, in their own home-from-home, and have the family there too? It also underlines the commitment of this business to make everything as convenient as possible for the whole family, from grandparents to grandchildren.

Undoubtedly it is this concern for family values that has made Jurgens Ci the success it is - the country’s largest organisation in its field, with dealerships throughout the country, and a major exporter. It is rather ironic that the descendants of Oubaas Jurgens, who ‘got up’ from the Netherlands and came to South Africa, now export to that country! Jurgens Ci also exports to Australia and New Zealand.

May this ‘get up and go’ attitude prevail for the next 60 years and make caravanning ever more exciting for those who want to do it now.