20-year old Khule Ngubane will be skating his heart out at the Kimberley Diamond Cup Grand Slam at Moses Mabhida Stadium in Durban on Saturday, 26 July. Coming fresh off his wild card victory in George and as the 2013 defending champion, Ngubane is super excited to hit the ramps at the iconic stadium, built for the 2010 Soccer World Cup. 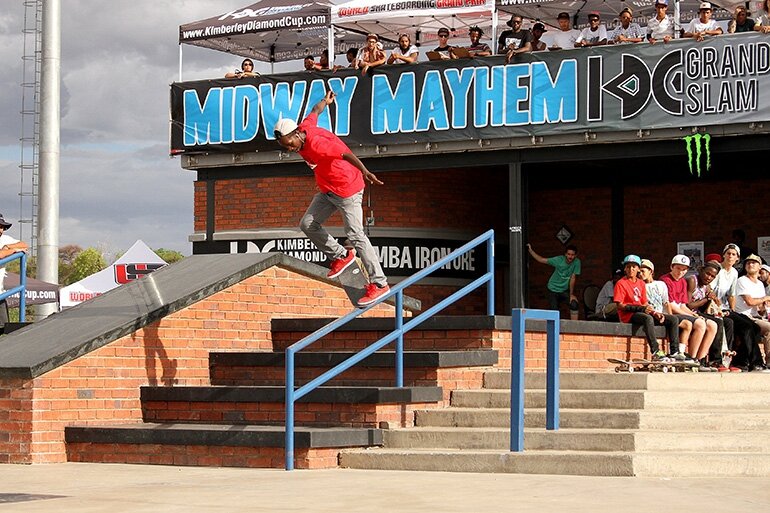 “I promise you some amazing skateboarding is going to go down on Saturday. I’ll be skating my hardest and I expect no less from my peers. It will be fun not to get kicked out of the stadium for trying to skate there,” laughs Ngubane.

The Durban Grand Slam is the third in the series of KDC events, each which carries a whopping prize purse of R50 000 as well as the opportunity to score a wild card entry into the world skateboarding championships in Kimberley in October. One lucky team will also qualify for the Rider Cup team contest, where they’ll compete against the best 4-man team from the States. The action will start from 10h00 with qualifier rounds before the finals in the various age categories, the team contest and the best trick jam.

Ngubane has been skating since his granddad bought him his first skateboard for his twelfth birthday. He found a natural aptitude for the sport and soon left his beloved basketball and golf to take up skateboarding full-time. “I have literally been living the dream since I received my first skateboard. We lived in Westville and we always used to skate at the Pavilion shopping mall and skateboarding took over my life. It just came naturally and pretty soon I was starting to do well in contests and managed to catch the eye of some sponsors. Once you start winning contests, it creates hype and other kids want to own the same shoes or boards as you, which attracts sponsors,” explains Ngubane.

According to Ngubane, the Kimberley Diamond Cup has definitely helped him financially as the various contests taking place throughout the year create more opportunities. “They are consistently hosting events around the country, so you’re putting in more effort into your skating. You need to up your skills and the vibe is also more competitive. I love the fact that it has made skateboarding a household sport and definitely socially more acceptable. It’s no longer just for a bunch of misfits and people are beginning to realise that skateboarding is creating a positive lifestyle for us,” says Ngubane.

“I would love to become a professional skater and go out there and convince kids that skateboarding can play such an important role in your life. Without it I might have been using drugs or gotten a girl pregnant or become involved in crime. Instead skateboarding showed me a way of trusting myself, kept me out of trouble and level-headed. And now it is paying off and I get to do what I love. There is no greater feeling than the joy on the kids’ faces when they show you a new trick and they feel that they’ve achieved something important,” mentions Ngubane.