Casual Day ambassadors have issued their annual challenge to the youth of South Africa to spring into action for persons with disabilities. Thuli Matlala, 2J Harmonix, Patrick Mashegwana and Khumo Moyane, spent some time at a recent music concert to get the endorsement of celebrities DJ Zubz and TV presenter Lezanne Naidoo for this year’s Casual Day campaign. 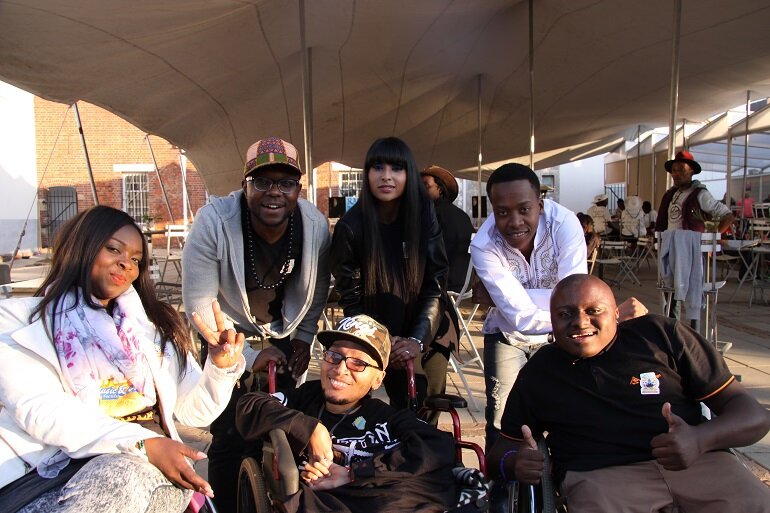 Casual Day ambassadors are out in force to tell South Africans that Casual Day is on Friday 4 September this year and the theme is Spring into Action.

In honour of Youth Month and to commemorate 16 June, they are encouraging young people to follow their lead and volunteer for Casual Day by helping organisations to raise donations for stickers and to get their schools to celebrate the day.

“Most of us were introduced to Casual Day and school – and this is an ideal way to introduce learners to the idea of volunteering their time to a worthy cause. Casual Day raises awareness for persons with disabilities and a school environment is the best place to get children on board,” says Khumo Moyane, who matriculated at Pretoria School for Learners with Disabilities.

“Casual Day is one of the school’s fundraisers and without the education I received at the school I would not have graduated from college and had the opportunity to become employed. There are hundreds of schools for learners with disabilities all over the country that benefit from Casual Day funding. And Casual Day is a fun way for learners to do their community service.”

Casual Day ambassador, rapper and motivational speaker 2J Harmonix said: “I was really chuffed to meet underground hip hop legend Zubz, who is not only a brilliant artist, but also a socially conscious person who has spent much time with disadvantaged youth in the townships of Soweto and Alex. I was so proud when I saw him wearing his Casual Day sticker and I hope that his endorsement will inspire youth in those areas to support our cause.”

2J did not miss the opportunity to invite Zubz work with him on a music collaboration. Zubz said he is impressed with how 2J uses his music to tell the story of how he lives with muscular dystrophy, adding: “I’ve always wanted to share the stage with 2J Harmonix. Before, he’d seen me on stage while in my audience. This time I got to see him on stage while I was in his audience. Soon, we’ll get to share a stage, an audience and complete the cypher.”

Casual Day ambassador Thuli Matlala has her own company that works to change attitudes around disability. She said: “I invite all young celebrities and media personalities to use your fame to endorse Casual Day. The fundraiser provides the country with the opportunity to show their solidarity with persons with disabilities, at the same time enjoying togetherness with their fellow participants.”

Casual Day ambassador Patrick Mashegwana added: “We are building bridges between the community of persons with disabilities and the society in which they live – and encouraging them to participate in Casual Day.”

Casual Day is South Africa’s most successful fundraising project for persons with disabilities – and the amount raised for last year has climbed to R28 million. Sponsored by The Edcon Group, Casual Day is the flagship project of the National Council for Persons with Physical Disabilities in South Africa (NCPPDSA).