Johannesburg, June 03: The 33 kilometre trip up the Sani Pass to the highest pub in Africa and onwards into the ‘mountain kingdom’ will become more accessible and act as a magnet to boost visitor numbers when the job of laying asphalt on the twisting gravel surface that links South Africa and Lesotho is completed. 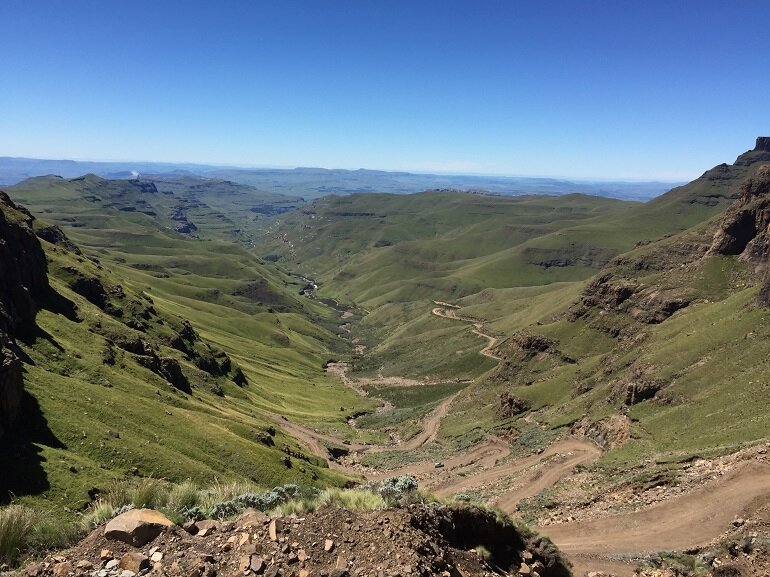 Announced in 2014, the laying of an asphalt surface at an estimated cost of R 887 million is already well underway, but it will be some time before the project is completed and provides a more ‘driveable’ link between KwaZulu Natal and Lesotho, says Mpaiphele Maqutu , Chief Executive Officer at the Lesotho Tourism Development Corporation, who adds that estimated completion date for the project is 2016.

“Once completed, the road will act as an attraction to a broader base of tourists and bring new prosperity and economic development to the kingdom.

“This project will bring to life what was envisaged when the South African and Lesotho governments agreed that tarring the road made sense-both from an environmental and economic viewpoint. A gravel road deteriorates and is degraded by traffic and constantly changing weather. Grading to repair the surface has to take place on a regular basis. This over the years has placed constraints on the free-flow of people between the two countries and the economic prosperity of Lesotho-something that is beneficial to both countries.”

From a tourist viewpoint, says Maqutu, it is doubtful whether the improvement of the surface will lead to a decline in tourist traffic as has been claimed in some circles. He points out that the road, full of hairpin bends that wind in on themselves, will still remain a challenge to motorists who get a thrill from driving up the pass.

“We have no doubt that increasing numbers of tourists will take to the road. All that will change, however, will be the fact that instead of just having a drink at the pub at the road’s summit, more will be encouraged to drive into Lesotho and experience the unique beauty of Africa’s highest kingdom.

“This improved access will bring Afriski, Africa’s biggest snow-ski resort, closer and enable enthusiasts – who previously entered Lesotho through the Free State to enjoy the Sani Passand proceed with ease to the Afriski Mountain resort.

“At Lesotho Tourism Development Corporation, we believe that the development will encourage more visitors to enjoy our land of mountains and discover more about the country whose entire area lies at an altitude that ranges between 3,482 and - 1 400 metres above sea level.

“Access via Sani Pass will, we believe, also encourage rather than discourage adventure tourists. The drive up the pass will be easier, but the new road will also bring closer features such as the Thabana-Ntlenyana mountain- at 3 482m, the highest plateau in Southern Africa; the 192 metre single waterfall drop of Maletsunyane is 192m with the world’s highest abseiling cliff. At 204 metres, this edifice presents a challenge that few adventure tourists will want to miss.

“Making all this more accessible to visitors simply makes sense.”

The tarring of the Sani Pass road is also a major step forward in encouraging South Africans and international touriststo make Lesotho a destination of choice-a formal programme that was recently launched in the country and is steadily gathering momentum.

“Opening the likes of Letseng diamond mine area which boasts the world’s finest carat rated diamonds to tourism through the Sani road development will mean bringing the benefits of sustainable jobs and economic development to this area.

“Adding more tourist accommodation and conference facilities in Maseru, another major focus, will also add momentum to the drive of increasing Lesotho’s status as an African tourist destination in its own right,” says Mr Maqutu.